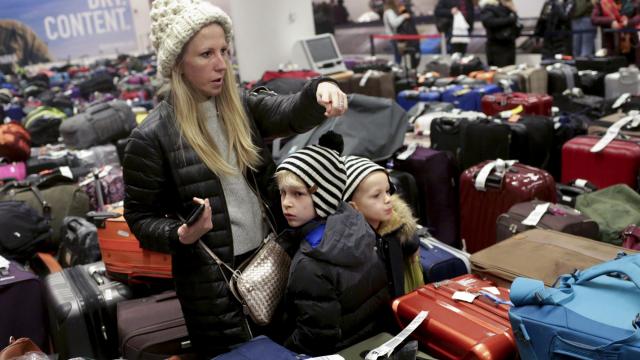 A water main break in Terminal 4 sent people fleeing in a partial evacuation and left bags and suitcases in water. Entire areas of the terminal, including the heavily used bathrooms at both ends of the ground floor waiting area, were cordoned off. Outside, the taxi stand was shut down while the traffic lanes closest to the terminal were cleared.

“You would think with water mains breaking all over town they would have a contingency plan,” said Michael Rossiter, 54, of Jersey City, New Jersey. “A couple of guys with squeegees doesn’t seem to do the job.”

As Rossiter waited, water spread across the terminal floor, flooding a diner and newsstand while terminal employees, state troopers and others rushed to sop up water with wide-brushed mops.

Rossiter said he and his family “just want to get home — and now this.”

For thousands of weary travelers, there seemed to be no end to the massive fallout from Thursday’s winter storm, which damaged equipment and forced scores of flights in and out of Kennedy Airport to be canceled or delayed. The effects have rippled across the world, stranding passengers at airports as far away as Beijing, many of whom are trying to return home after the holidays.

Federal officials were forced to limit some flights into Kennedy Airport on Saturday, and the disruptions continued into Sunday. Shortly after the water main break in Terminal 4, the airport closed that terminal to international flights and diverted some planes to other terminals.

Adeola Dorris, 40, an accountant from Guyana, has been stranded at the airport since Saturday night, after her connecting flight on Caribbean Airlines was canceled. “When the flight was suspended, I literally cried,” Dorris said, “Because I’m here alone and I have nowhere to go. And you can’t tell me when I’m going to get home. And I have to work tomorrow.”

The continuing chaos at the airport drew harsh condemnation from Sen. Chuck Schumer, D-N.Y., who called Sunday for “a thorough review” of the airport and the Port Authority of New York and New Jersey to find out what went wrong, especially since Thursday’s storm had not come as a surprise.

“They should have been way better prepared, plain and simple,” he said. “JFK has to follow the Boy Scouts’ motto: ‘Be prepared.’ They weren’t.”

Schumer said he wanted to know what would be done to prevent this from happening again with more cold weather on the horizon.

“It seems like almost everything broke down,” he said. “It seemed like a disaster, whether it’s the runways not being plowed, whether it’s the baggage machines that transport the baggage freezing, whether it’s not notifying people what’s going on. One of the most frustrating things when you’re stuck and you’re going somewhere or want to get home, it’s to not know what’s happening.”

Brittany Morris, 20, of Stow, Ohio, waited hours Sunday for an Air France flight to Paris as part of a group of college students on their way to a study-abroad program through Kent State University.

“I hate traveling in the first place, so this is like kind of a nightmare,” she said.

Another student, Bekah Baker, propped herself against a pillar at the airport with a laptop in her lap. By midafternoon, she had been sitting in the same spot for about five hours; and her delayed flight was not scheduled to leave for another six.

“It’s been a process today, but at least we have a big group of us, so we keep ourselves entertained,” Baker said, adding, “somewhat.”