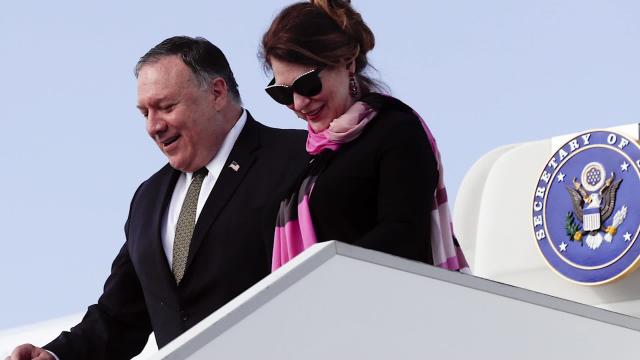 CNN — State Department acting Inspector General Matthew Klimow is leaving his post earlier than expected after just a few months on the job, he told colleagues in a memo, a source at the Office of the Inspector General told CNN on Thursday.

Klimow announced his departure the same day Secretary of State Mike Pompeo's department offered a combative response to an inspector general report on an investigation into travel by the secretary's wife, Susan.

The independent watchdog found that the majority of trips by Susan Pompeo over a two-year period had taken place without written approval from the State Department, despite the fact that her trips were considered official travel and paid for by US taxpayers.

Klimow is now the third head of the State Department's Office of the Inspector General to leave early on Pompeo's watch. His departure is just the latest sign of friction between the top US diplomat and the independent watchdog assigned to look into waste, fraud and abuse at the agency. The Washington Post first reported Klimow's departure.

Pompeo and his wife have generated a slew of inspector general investigations while at the State Department and the secretary has drawn scrutiny for asking President Donald Trump to fire an inspector general who was looking into his use of taxpayer resources at the oldest US Cabinet agency.

The top US diplomat is also being investigated by the Office of Special Counsel, an independent federal investigative agency, for possibly violating a federal law that forbids federal employees from engaging in political activity while on duty. And Pompeo raised the concerns of Navy lawyers in 2018 with a request for military housing that raised "factual, legal, fiscal and ethical issues."

Pompeo has refused to sit for interviews with the inspector general's office and bristled when asked publicly about the oversight.

Klimow, who took over as acting inspector general in late August, cited the Vacancies Reform Act, which allows officials to serve in an acting capacity for 210 days after a vacancy is declared, as the reason for his departure, a source familiar with the memo told CNN.

Klimow is also the US ambassador to Turkmenistan and maintained that role while he was at the Office of the Inspector General. Part of his calculation for leaving now is that he is trying to get back to the US Embassy in Ashgabat to provide leadership there, the source said.

The report Klimow's office released to Congress on Thursday found that from April 2018 to April 2020, Susan Pompeo took eight official trips, but that there was only documentation of written approval for two of them. Brian Bulatao, the under secretary of management and a friend of Mike Pompeo's since their days at West Point, told investigators he had given the remaining trips a verbal sign off.

The inspector general's office did not suggest that anyone be fired or face penalties as a result of its findings, though they did suggest that the department get written approval for all future travel by family members.

No penalty was recommended because there was no violation of law or stature, just a violation of a recommendation that the legal adviser made, a source at the Office of the Inspector General tells CNN. In such instances, the source said, the OIG traditionally gives some room for the State Department to make its own decision.

Pompeo offered a blistering response through a statement from the office of his spokesperson, charging that he and his wife were "fully vindicated from baseless claims reported as fact by Democrats and Media." The statement went on to say that "there was no wrongdoing by the Secretary of State, his spouse or family, or the State Department. The OIG wasted both time and taxpayer resources on this report."

Thursday's report is the just latest in a string of OIG investigations into the Pompeos' potential misuse of taxpayer dollars, probes that have examined whether the couple had staff walk their dog, pick up dry cleaning, send personal cards and make dinner reservations.

Inspector General Steve Linick was looking into at least five instances of potential wrongdoing at the State Department when Pompeo asked Trump to fire him. Ousted in May 2020, Linick was just one of several independent government watchdogs that Trump jettisoned without explanation.

Pompeo has repeatedly denied that Linick's ouster was retaliatory but has defended his push to have Linick fired by telling reporters he "should have done it some time ago," even as he refused to explain his reasoning.

Under Linick, the OIG also looked into whether Pompeo broke rules when he declared an emergency last year that allowed the administration to fast track an $8 billion arms sales to Saudi Arabia and the United Arab Emirates for their war in Yemen despite congressional objections.

Pompeo refused to sit for an interview with the inspector general's office as part of that investigation, a congressional aide told CNN.

There is still an ongoing State OIG investigation into the Pompeo's misuse of State Department resources.

Linick's replacement, Stephen Akard, an ally of Vice President Mike Pence, served in the job less than three months before stepping down. No explanation was given.

Susan Pompeo had drawn inspector general scrutiny in the past for having State Department staff send her personal family Christmas cards. She has also triggered complaints from within the State Department for the demands she placed on staff during trips. Pompeo has defended her presence, calling her a "force multiplier" who is able to get to duties that he doesn't have time for, including meeting with medical officers and touring housing.

In May, Pompeo defended his wife on Fox News for being the subject of investigations, saying that "the fact that they're picking on my wife, who has done yeoman's work as a volunteer to try to make life better for every officer at the State Department, I find pathetic and sad."

Thursday's report on the investigation into Susan Pompeo's travel was the result of a whistleblower complaint.

When a trip is considered official travel, also known as representational travel, the government pays for it. Otherwise, any nonofficial passengers on those flights must reimburse the government.

"For family travel that is considered representational, not only does the family member not have to reimburse the government for the flight(s), but he or she also receives significant travel support from the Department at no cost, including provision of a control officer and many hours of support from Department employees," Thursday's report explains.

"OIG recommends that in order to ensure that the Department has appropriate documentation for internal control and record keeping purposes, the Office of the Secretary seek and gain written approval for all representational travel, and that the Under Secretary for Management or other authorizing official document in writing the approval for all representational trips by any family members," the report states.

Pompeo and his wife have also been criticized for holding so-called Madison Dinners in ceremonial rooms at the department, where government resources are used to host CEOs, GOP donors, conservative reporters and some foreign diplomats. They are viewed as dinners to build Pompeo's network and donor base, and not seen as dinners geared toward foreign policy, State Department officials involved in the planning have told CNN.