Watch out, Tinder, Facebook is getting into online dating 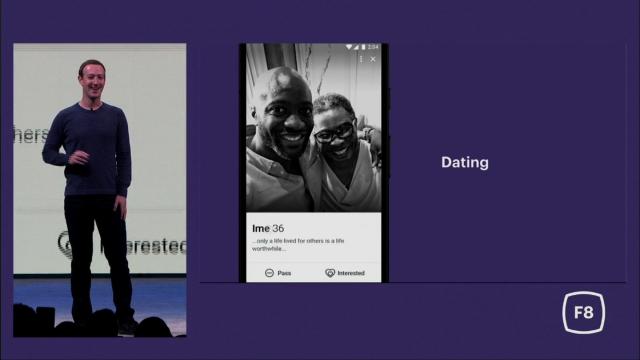 At its annual developers conference, F8, on Tuesday, the company announced a new dating feature.

Users can set up a dating profile with their first name, which the company said won't be visible to friends and will not appear in News Feeds. The feature is opt-in and users will not be matched with people they are already friends with, according to Facebook.

On the dating service, people will be able to browse events and groups related to their interests, such as upcoming concerts or groups for runners. If a user sees an event they'd like to attend, they will be able to "unlock" that event to interact with others attending it.

From there, their dating profile will be shared with other people going to the event who are also using the dating service. They will be able to browse through those users and start a conversation in a private messaging inbox that isn't connected to the Messenger or WhatsApp apps.

"I know a lot of you are going to have questions about this. We've designed this with privacy and safety in mind from the beginning," Zuckerberg said during a keynote speech.

Other details about the service are unclear. The dating feature is set to roll out later this year.

The move will create new competition for popular dating apps like Tinder, Hinge and Bumble. And it will pose a test for them because they have largely come to rely on asking their users to login with Facebook credentials. This grants the apps access to select Facebook data, which helps to speed up the process of creating dating profiles.

Shares of Match Group -- the parent company of dating platforms like Tinder, Match.com and OKCupid -- plunged as much as 19% on Tuesday afternoon following the news. Shares of IAC/InterActiveCorp, the majority owner of Match, also fell 11%.

The degree to which dating apps are reliant on Facebook access came into the spotlight just last month.

Shortly after Facebook announced stricter rules for its third-party developers, Tinder stopped working for some of its users who were temporarily unable use their Facebook credentials to log into their Tinder accounts. The issue was resolved but it was unclear exactly which Facebook updates caused the issues for Tinder.

And amid concerns about how Facebook is sharing user data, Bumble announced last month that iOS users no longer need to signup or login with Facebook. Instead, they can input a phone number to register and login.

A spokesperson for Bumble said the company was "thrilled" when it saw the Facebook news.

"Our executive team has already reached out to Facebook to explore ways to collaborate. Perhaps Bumble and Facebook can join forces to make the connecting space even more safe and empowering," the spokesperson said in a statement provided to CNNMoney.

Bumble and Match Group have been engaged in a very public legal battle in recent weeks.

Match Group and Hinge did not immediately return requests for comment on the news.

This isn't the first time that Facebook has taken on another tech company by introducing a feature similar to the other company's core business.

It's created Marketplace, where people can browse items for sale nearby, in a bid to compete with Craigslist and eBay.

Users can order takeout directly on Facebook from fast-casual restaurants like Chipotle, Panera and Papa John's. They can also send money to friends on the platform.

Facebook-owned Instagram has taken on many of Snapchat's top features. Earlier this year, Facebook also stepped up its job postings features in an effort to take on LinkedIn.