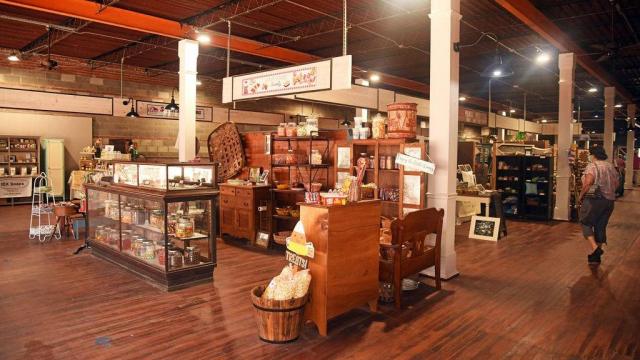 Washington's Harbor District Market has been around for less than two years, but it's already made a big impact in the community and has quickly become a gathering place for people who want locally made goods in a historic atmosphere.

The Market, located in the heart of downtown, is home to 26 full-time vendors and is a mix of produce, craft, and baked goods that must be locally grown or made. The one-of-a-kind retail location attracts as many as 1,500 visitors on Saturdays as purveyors peruse goods and gifts from shops in the renovated McClellan's Department Store.

"Back in 2017 some members of the Washington Harbor District Alliance had this vision of expanding out the Saturday farmer's market. Agriculture is a huge part of Washington’s economy and there was this building that had sat empty for many years. It had a failed roof and it just was kind of an eyesore in the middle of downtown. So the nonprofit bought the building," said Meg Howdy, executive director of the Washington Harbor District Alliance.

Washington Harbor District Alliance is a nonprofit focused on revitalizing downtown Washington and cultivating an economy anchored in local ownership.

"Within 18 months, through fundraising, local businesses support, and support from the city of Washington, the building was restored and we were able to open on June 1, 2019. It was just really amazing how it was all put together so quickly," finished Howdy.

The old McClellan building, which was once a 5- and 10-cent store, has had several different tenets over the years and has taken on many personas, but it is now a weekend hub locals look forward to.

"Outdoor markets are great, but there are a lot of variables to them — namely weather. We always thought if we could find the right indoor location we would make it happen," said Chris Furlough, board chair of the Washington Harbor District Market. The market was Furlough's brainchild and he was instrumental in helping it come to fruition. "I was walking past the old McClellan building one day and thought, 'Wouldn't it be cool if we could turn this into a market.' The bones, the space, and the structure of the building were perfect for what we were looking for."

The 10,000 square foot renovated building features an "old timey" sweets shop in the front of the building, an Underground Railroad Museum exhibit, exhibition and kitchen space upstairs, and of course, space for vendors.

Vendors include Bear Grass Soaps, Pamlico Paper, Carolina Country Fresh, Mickeye's Wood Creations, Southside Farms and Tobacco Roots, to name a few. You can purchase everything from custom crochet hats and unique art to skincare products and microgreens at The Market.

"We were looking to partner with local businesses that grow, raise, catch, or produce quality products in Beaufort County and the surrounding areas. It's important that the market reflects local agriculture," said Furlough.

"We like to say The Market is where agriculture meets community," added Howdy.

The response to The Market has been great and there has been no shortage of weekly visitors or people interested in becoming a vendor — in fact, there's currently a waiting list to become one.

"While it may have been my idea initially, it has truly been a team approach," said Furlough. "It's great to have a place for the community to gather and have face-to-face interaction with the person who made the thing they are purchasing.”

The mission of The Market is to be "a community building space for local farmers, fishers, food entrepreneurs, artisans, neighbors, customers and partners to come together around the common culture of supporting locally sourced produce, crafts and other products." Additionally, The Market hopes to create opportunities for small businesses to thrive.

"One of our former vendors, Vals Gourmet Baked Goods, actually moved into their own brick and mortar store on Main Street," said Howdy. "Additionally, Locavore expanded and got a kitchen over by the hospital, which has allowed them to take the produce from their farm and make fresh salads, soups, and all kinds of things."

Furlough said it's been exciting to witness people move from a "day space" to having their own storefronts. He said while it's sad to lose vendors from the market, it ultimately levels up to their vision of creating a robust local economy.

Not only has The Market helped bring people and businesses together and served as a launchpad for small business owners to branch out and expand, Howdy said it's also created a destination experience in the downtown corridor and encouraged commerce at other downtown businesses and restaurants.

Looking ahead, there are plans for The Market to host festivals, workshops, cooking classes, and tours. Local musicians have already lent their talents to the market, playing to crowds of weekend shoppers. The Market is also partnering with Beaufort County Community College to use future kitchen space for continuing education, culinary arts classes, and agribusiness programming.

"There's actually a second floor of this building and we are putting a training and workforce development center as well as a training kitchen that will be available for rent," said Howdy. "We are also in the process of putting in a demo kitchen downstairs that hopefully will get people excited about taking some of those classes. We have a really neat heritage cooking program that is planned for the future once we get past the coronavirus."

"[We want to] nourish our inclusive community with experiences, conversation and education about the impact and benefits of buying locally," states the Harbor District Market website. "The Market will create an engaging, educational experience and a vibrant positive environment for everyone."

Washington Harbor District Market is located at 140 W. Main Street and is open on Thursdays and Fridays from 10 a.m. to 4 p.m. and on Saturdays from 8 a.m. to 4 p.m.