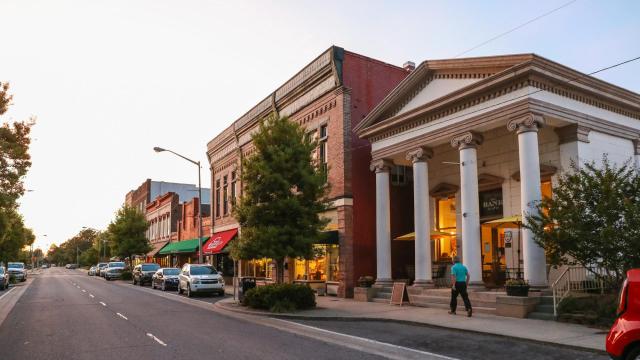 The business and residential offerings of Washington, N.C., have changed greatly in the past century, but the stretch down Main Street has stayed the same in many ways, and has been in serious need of an update.

Approved unanimously by the city council, Washington's downtown streetscape project has been years in the making and is finally coming to fruition. The final product will stretch down Main Street from Market to Gladden and update the infrastructure for things like water, sewage and electric, as well as increase lighting and the general aesthetic.

"That portion of town has a lot of older infrastructure, older water lines, sewer lines, storm water lines. That infrastructure is 70 to 80 years old, and the city felt that it had exceeded its lifespan. When we considered the fact that we were going to have to dig the streets up, we felt that it would be a good time to redesign and reconfigure the sidewalks and the street, as well," said Adam Waters, project manager of the streetscape initiative. "Then when we started looking at some of the concepts of redesigning the sidewalks and streets, we wanted to keep that historic look, but bring it up-to-date and make it more pedestrian friendly — help people navigate the streets as well as provide places for people to sit and congregate."

Construction on the streetscape project began in April and is slated to be completed in October — especially since prime shopping season for downtown vendors happens in November and December. In addition to updating the infrastructure on Main Street, the city also hopes the aesthetic improvements will boost tourism in the area.

"Replacing some old water and sewer infrastructure, as well as upsizing — both of those allow for future development with a focus on residential of the second, third, fourth floors of existing buildings along Main Street," said Jonathan Russell, Washington's city manager. "A lot of the ground level of most of downtown has been developed for commercial properties, but recently there's been more interest in moving up from there. In order to do higher density, residential development, you have to have fire flow capacities that were not available previously. This will make development of the remaining property possible now."

Both Russell and Waters have done what they can to intentionally make construction as minimally invasive as possible for local business owners with a storefront located along the Main Street stretch. While there have been some concerns about interruption in business, the decrease in traffic from stay-at-home orders has been convenient for progress.

Overall, the community has been wholly supportive of the project, even if there are some interruptions to daily life.

"Communication has been a key element in working with the business owners — how things will be staged, how things will move forward and what to expect — then to try to promote and market as best we can to increase traffic flow during this time of disruption," Russell said. "People were excited, but also apprehensive. Right now we're in the construction phase, a couple of months in, and we hope for continued patience with the understanding that we'll have a great product at the end and reinvesting it into the community."

Added Waters, "We've tried to communicate with all the business owners through meetings with the downtown merchants, as well as we communicate through the Harbor District Alliance. And I'm down at the project pretty much every day. I try and stop into a couple of businesses at least daily and check on things, as well as make myself available for anybody that has any questions or problems so that I can be an ear for them."

In completing such a significant project, the city hopes it will be a boom to the economy through increased tourism and foot traffic, while also drawing attention to the unique gems Washington has to offer.

"It enhances probably one of our greatest assets, which is our geography and our location along the river. The waterfront is a wonderful resource for visitors and citizens alike. It provides a great economic engine for the community and the region, and I think this will enhance the part of the community where it's a focal point of our uniqueness," Russell said. "It can't be recreated elsewhere with any other streetscape project. The river — it makes Washington unique, and these updates just enhance that entire aspect of the community."