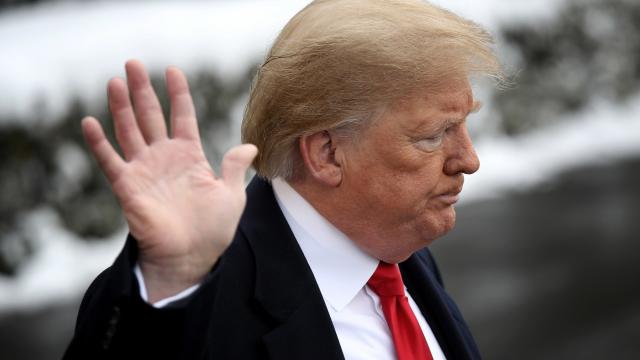 CNN — The White House is proposing a new budget that would not eliminate the federal deficit in the next 10 years.

The $4.8 trillion budget plan essentially serves as a statement of priorities for the President ahead of the 2020 presidential election, but like any budget proposed by the White House, Trump's 2021 plan must be passed by Congress. And with a Democrat-controlled House of Representatives and a GOP-controlled Senate, what ultimately gets passed may show little resemblance to what the President has proposed.

Trump had campaigned in 2016 on pledging shrinking the federal deficit. And while the President's 2021 plan does not eliminate the deficit in 10 years, it does reduce it by slashing entitlements and other non-discretionary domestic spending.

The President's budget would slash funding for the Commerce Department by 37% for the upcoming fiscal year. Foreign aid overseen by the State Department would be cut by nearly 21%.

The administration is also looking to cut roughly 8% from each of the Departments of Agriculture, Energy and Education. The proposal also calls for a 15% cut from the Housing and Urban Development's budget, while the Centers for Disease Control and Prevention would see its budget trimmed by 9%.

The President is also proposing big cuts in health care, Medicaid and other safety net programs, though he said Monday he was not cutting Medicaid.

Trump said Monday that his administration's budget proposal would include $740 billion in military spending, would not touch Medicare or Social Security and would not decrease funding toward Medicaid.

"We're doing a lot of things that are very good, including waste and fraud," Trump said.

But the new budget proposal calls for $844 billion in savings over 10 years from the "President's health reform vision." It projects hundreds of billions of dollars in savings through changes to several federal safety net programs, including Medicaid, food stamps and federal disability programs.

The deficit -- the gap between how much the government spends versus how much it takes in -- surpassed $1 trillion for the calendar year in 2019, marking the first time since 2012.

That number is only expected to widen even further over the coming decade, reaching a total of $1.7 trillion in 2030, according to the latest projections by the nonpartisan Congressional Budget Office released in late January.

That's a sharp contrast to the White House's latest blueprint, which projects that the deficit will shrink to $261 billion by 2030. The President's budget assumes that the economy will grow at around 3% annually during that period of time helping to narrow the gap. Those estimates are significantly higher than what most economists anticipated along with the Federal Reserve.

The deficit growth predicted by the Congressional Budget Office is due in part to tax cuts and a two-year budget deal that has boosted federal spending under Trump. It's swelled to $984 billion at the end of the last fiscal year, up from $665 billion during his first year in office in 2017. Usually, big budget deficits widen during economic downturns -- but the US economy is expanding and unemployment is at a 50-year low.

The budget proposal requests $2 billion in homeland security funds for the US southern border wall -- billions less than Congress had previously agreed to. The plan also calls for at least $1.5 trillion in cuts to "non-defense discretionary programs," which does not include Medicare or Social Security, according to CNN's review of the planned budget.

Former White House Council of Economic Advisers Chairman Kevin Hassett said on Monday that the budget proposal relies on potentially unrealistic growth to make up for anticipated cuts to programs such as Medicaid and food stamps.

House Speaker Nancy Pelosi reacted to the anticipated budget in a statement Sunday night, saying, "The budget is a statement of values and once again the President is showing just how little he values the good health, financial security and well-being of hard-working American families."

The national debt has been rising at an accelerated rate in the aftermath of the 2008 financial crisis, when Congress and the Obama administration approved stimulus funding in order to keep the economy afloat.

The debt began to level off at the beginning of Trump's term, but bounced up again as the tax cuts passed at the end of 2017 took effect and the dramatically lower corporate tax rate lowered Treasury revenues.

On Monday, Hassett also appeared to concede that the corporate tax cuts added to the deficit more than they thought it would.

"The tax cuts reduced revenue by more than we thought in the first year ... the corporate taxes are losing revenue with the rate, but gaining revenue with all the international tax rules and the stuff that can't pay for itself is like the joint tax cord," Hassett said.

As a candidate, Trump promised to "get rid of" the national debt, telling the Post in 2016 that he could make the US debt-free "over a period of eight years."

White House officials intend to say that their budget proposal would close the deficit by 2035, the Washington Post reported according to the newspaper's own review, setting up a timeline that would miss Trump's repeated vow to eliminate the federal deficit after eight years in office.