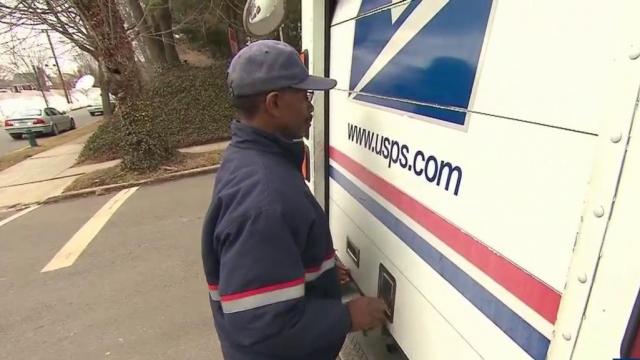 CNN — New, recently implemented US Postal Service procedures -- which have led to delays across the country in mail delivery -- could affect mail-in voting for the November election, a union leader warned.

The American Post Workers Union's president, Mark Dimondstein, told CNN in an interview Friday that the union has received a number of reports from postal workers and customers over the last two weeks that mail delivery has slowed and "degraded." The union represents more than 200,000 Postal Service employees and retirees.

Dimondstein said it's been "demoralizing and upsetting" to the workers who have continued to work throughout the pandemic.

He told CNN that while postal workers are capable of handling voting by mail, "obviously if the postal management is putting in policies to slow down the mail, then that has an impact on everything, including ballots."

The new procedures for the USPS were laid out in a memo earlier this month and come under the leadership of Postmaster General Louis DeJoy, a longtime Donald Trump supporter and fundraiser, who stepped into his role in June.

Trump has been a vocal critic of several states' expanding mail-in voting, despite using that option to cast his own ballot. As he currently trails his 2020 rival Joe Biden in the polls, Trump claimed on Thursday that delays processing the mail-in votes would undermine the legitimacy of the November 3 election and suggested delaying it, though the power to set the election date lies with Congress. There is no evidence of widespread voter fraud associated with vote by mail.

The Washington Post reported Thursday that bins of mail otherwise ready for delivery have been left in post offices due to the scheduling and route changes, and letter carriers are sorting more mail themselves, increasing the delivery time. US Rep. Andy Kim, a New Jersey Democrat, last week wrote to DeJoy, saying that his constituents have been experiencing delivery delays for more than three days.

In a statement to CNN Thursday, the USPS acknowledged some "temporary service impacts" from the recent changes but disputed concerns that its cost cutting and efficiency measures put in place by DeJoy will interfere with timely delivery of mail-in votes.

"To be clear however, and despite any assertions to the contrary, we are not slowing down Election Mail or any other mail. Instead, we continue to employ a robust and proven process to ensure proper handling of all Election Mail consistent with our standards," USPS spokesperson David Partenheimer said.

The new policies include hours being cut back within the US Postal Service, according to the memo obtained by CNN that shows talking points given to USPS managers across the country on July 10.

According to the memo, overtime, including late trips and extra trips by USPS workers, is no longer authorized or accepted. This is explained as a cost cutting measure that could save the financially struggling USPS around $200 million.

"One aspect of these changes that may be difficult for employees is that, temporarily -- we may see mail left behind or mail on the workroom floor or docks ... which is not typical," reads the memo.

The memo states any mail left behind will be reported with the "root causes" of the delays addressed the next day, with the intention of the volume of delayed mail shrinking over time, but the reality of that remains unclear as the changes are new.

DeJoy said in a statement Monday that the Postal Service is in a "financially unsustainable position" and that the agency needs to "take a fresh look at our operations and make necessary adjustments" to operate efficiently.

Partenheimer said in the statement that any "such impacts will be monitored and temporary as the root causes of any issues will be addressed as necessary and corrected as appropriate."

In his interview with CNN, Dimondstein also expressed concern that the mail service is being politicized and said DeJoy's actions as postmaster general so far are "troubling."

Partenheimer said that DeJoy is not beholden to the influence of Trump and that the "notion that the Postmaster General makes decisions concerning the Postal Service at the direction of the President is wholly misplaced and off-base."

The USPS' financial struggles are not new, but the coronavirus pandemic has exacerbated the problem and taken its toll on the agency's employees. Former Postmaster General Megan Brennan had warned the agency would run out of money by September if financial assistance wasn't provided.

On Wednesday, the Treasury Department announced that it reached an agreement with USPS on the "terms and conditions" for $10 billion in the form of loans -- funding the department and President Donald Trump had blocked unless the USPS made reforms.

"While the USPS is able to fund its operating expenses without additional borrowing at this time, we are pleased to have reached an agreement on the material terms and conditions of a loan, should the need arise," Treasury Secretary Steven Mnuchin said in a statement.

Dimondstein told CNN on Friday said that the loan makes things worst and pushes the USPS further into debt. He reiterated his support for Congress to appropriate coronavirus emergency funds for the Postal Service.

The union president previously told CNN that receiving the emergency funding the USPS requested is crucial for postal workers to continue doing their job, including ensuring vote by mail ballots are handled properly.

This story and its headline have been updated with additional reporting from CNN.