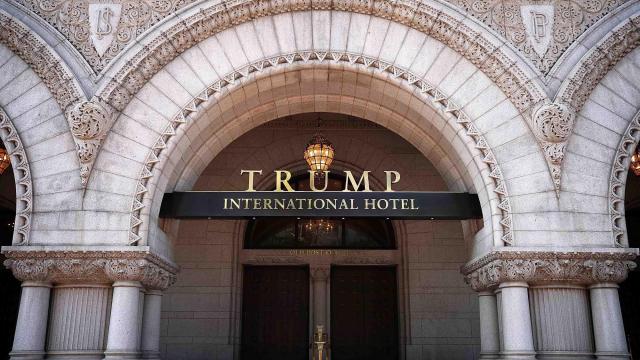 (CNN) — A lobbying firm backed by Saudi Arabia booked hundreds of rooms at the Trump International Hotel in Washington shortly after the 2016 election, The Washington Post reported Wednesday.

The firm, Qorvis/MSLGroup, "has long represented the Saudi government in the United States," according to the Post. The group booked nearly 500 nights at the hotel to house US military veterans who were invited to DC to lobby against a law the Saudis opposed, the Post said, citing veterans and organizers of the trips.

"In all, the lobbyists spent more than $270,000 to house six groups of visiting veterans at the Trump hotel, which Trump still owns," the paper said. Although the bill for the rooms was footed by the Saudis, only American veterans stayed in them during trips in December 2016 and January and February 2017, according to the paper.

The Post reported that veterans were recruited to lobby lawmakers against the Justice Against Sponsors of Terrorism Act, which "opened the door to costly litigation alleging that the Saudi government bore some blame" for the September 11, 2001, terrorist attacks. Some of the veterans, according to the paper, didn't know they were staying in rooms paid for by the Saudis.

"It made all the sense in the world, when we found out that the Saudis had paid for it," Henry Garcia, a Navy veteran from Texas who went on several of the trips, told the paper.

During previous trips, the firm had booked rooms at a hotel in Virginia, the Post reported. But lobbyists, according to the paper, said they decided to stay at the Trump-branded hotel because of its room availability and discounts it had at the time; the goal was not to patronize one of President Donald Trump's hotels.

Citing financial records, the Post said that on average, rooms at the hotel went for $768 a night around the time of the visits.

A representative from the hotel declined CNN's request for comment, and the Saudi Embassy in Washington and Qorvis/MSLGroup did not immediately respond to CNN's requests for comment.

CNN previously reported on two lawsuits by DC and Maryland that claim Trump is in violation of the Constitution's ban on emoluments -- payments from foreign or domestic government entities to the president -- because of his continued interest in the Trump International Hotel. The Post reported that the payments by the Saudis have become "ammunition" in the suits.

DC and Maryland have said the Trump International Hotel's operations put other nearby hotels and entertainment properties at a competitive disadvantage and that the Trump hotel got special tax concessions. The hotel won its lease on federally owned property in 2013, well before Trump's election.

On Wednesday, subpoenas served to the Trump Organization and a dozen related business entities by the attorneys general of the District of Columbia and Maryland included demands for tax documents, which, if obtained, could begin to fill out a picture of the President's finances by providing information about his main income sources.