National Archives apologizes and removes altered photo of 2017 Women's March: 'We made a mistake' 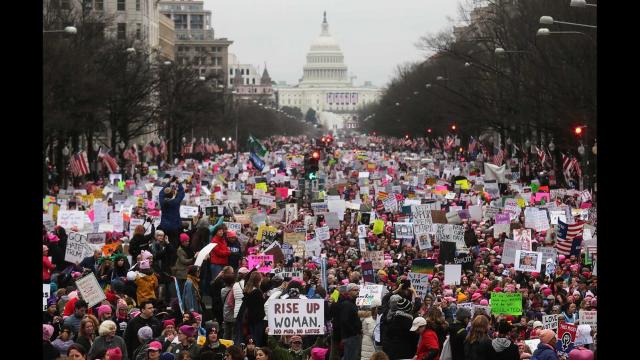 CNN — The National Archives on Saturday apologized and said it removed from display a 2017 photograph of the Women's March it had altered to censor signs referencing women's anatomy and President Donald Trump's name.

"We made a mistake," the National Archives said on Twitter, acknowledging that it had obscured some words from protest signs seen in the image. The archives said it will replace it with an unaltered image "as soon as possible."

The original photograph, taken by Getty Images' Mario Tama, shows a sea of people marching down Pennsylvania Avenue in Washington, DC, on January 21, 2017 -- a day after Trump's inauguration. In changes to the original photo, Trump's name was blurred from signs that read "God Hates Trump" and "Trump & GOP — Hands Off Women," according to The Washington Post, which first reported the altered photo Friday.

The National Archives said the photo was not an archival record, but one that they licensed to use as a "promotional graphic" for the National Archives Museum's exhibit marking the centennial of the 19th Amendment's ratification. "Nonetheless," it said, "we were wrong to alter the image."

The National Archives vowed to undergo "a thorough review" of its policies and procedures for exhibits.

"We apologize, and will immediately start a thorough review of our exhibit policies and procedures so that this does not happen again," it said.

CNN had reached out to the National Archives earlier Saturday for comment.

In a statement provided to the Post Friday, the National Archives said the decision "as a non-partisan, non-political federal agency" to blur Trump's name was to avoid engaging in "current political controversy."

The National Archives told the newspaper it obscured the references to women's genitals because the museum gets a lot of young visitors and the words could be seen as inappropriate.

"Our mission is to safeguard and provide access to the nation's most important federal records, and our exhibits are one way in which we connect the American people to those records. Modifying the image was an attempt on our part to keep the focus on the records," National Archives spokeswoman Miriam Kleiman said in the statement given to the Post.

Kleiman said the National Archives does not alter "images or documents that are displayed as artifacts in exhibitions."

National Archive officials did not respond to the newspaper's request for any examples of previous times when the museum edited photos or documents to avoid political controversy.

From one angle, the image had shown the Women's March photo from 2017, and looking from another side, you could see a black and white photo from 1913 of a women's suffrage march also on Pennsylvania Avenue, according to the Post.

The National Archives told the Post that the decision to edit the photo was made as the exhibit was coming together, and was supported by the archivist of the United States, David Ferriero.

"The National Archives is now whitewashing history. How disturbing is that?!" Rice wrote in a tweet Saturday.

Rudy Mehrbani, senior counsel at the Brennan Center for Justice, also tweeted earlier Saturday that the National Archives "created political controversy in attempting to avoid it."

"By erasing women's voices, you insult the suffrage movement & minimize the response to Trump's actions & election," Mehrbani, also a veteran of the Obama White House, said.

This headline and story have been updated with the National Archives' apology and decision to remove the altered image.