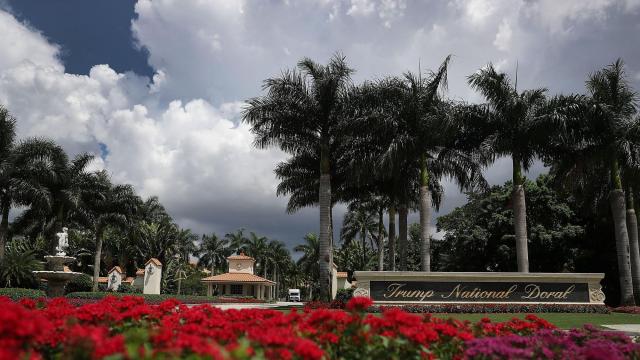 The Shadow Cabaret had been set to hold the "Shadow All Star Tournament" at the resort on Saturday with dancers serving as "caddy girls" for the tournament's participants, The Washington Post reported Tuesday. The paper said the "Trump name and family crest are displayed prominently in the strip club's advertising materials," which indicate that participation in the event ranges from $450 for a single player to $1,800 for a group of four with VIP upgrades available.

"The event was originally booked with the understanding that it would be raising money to support a local charity benefiting underprivileged children," a spokesperson for the Trump Organization said in a statement Wednesday. "Now that the charity has removed its affiliation, the event will no longer be taking place at our property and all amounts paid will be refunded."

Reached by CNN, Alamilla said Wednesday that he was not aware of the strip club's involvement when he agreed during a call from Mancuso to be a beneficiary of the tournament. He said he learned of it when the Post called him for comment, and would have declined involvement had he known of the club's connection.

Alamilla told CNN that he had sent Mancuso a letter Tuesday night and called him Wednesday voicing his frustrations and asking Mancuso to take the charity off all flyers and anything else associated with the tournament.

He added that he would not attend and wants nothing to do with the event.

In a statement to CNN, Mancuso said the Trump National Doral Golf Club had no association with the event beyond allowing the golf course to be rented.

"Due to the climate of everything surrounding our golf tournament Shadow Cabaret has decided to cancel this event," Mancuso said in a statement. "We want to apologize to anyone that may have been offended by the tournament. Our intention was to raise money for a deserving local charity. Trump Doral, the hotel, has no association with our company outside of simply allowing us to rent the golf course."

"We chose to host our tournament at the Trump Doral because of the prestigious golf course and luxury hotel accommodations. Though we have decided to cancel our event we will not let this detour us from continuing to work with different charities and to give back to the community."

The Trump Organization had told the Post in a statement that the event is for a "worthwhile cause," and an unnamed spokeswoman for the organization told the paper that the company "had not approved the tournament's advertisements before they were published."

President Donald Trump still owns the Doral resort, but his sons Donald Jr. and Eric oversee the day-to-day operations of the resort and his other properties, the Post noted.

Mancuso had said there would be no nudity at the resort, and that while on the course, the dancers would "wear pink miniskirts and what he called 'a sexy white polo,'" the Post reported.

Following the event, the dancers and the golfers were to "return to another venue — the cabaret itself — for what (Mancuso) described as a 'very tasteful' burlesque show, which could involve nudity," according to the Post.

"They're going to be clothed the whole time (during the event)," Mancuso had told the paper. "At the venue is different."