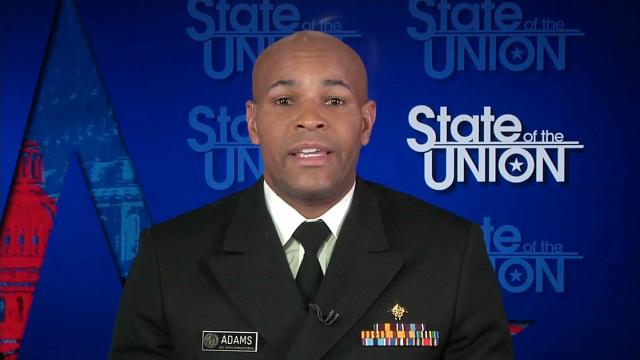 CNN — US Surgeon General Dr. Jerome Adams said Wednesday that he has been asked to leave his role as the nation's top doctor by incoming President Joe Biden's team

"I've been asked by the Biden team to step down as Surgeon General. Its been the honor of my life to serve this Nation, and I will do all I can to ensure everyone has an equal opportunity to achieve and maintain health," Adams tweeted.

The Washington Post had first reported Wednesday that Biden was expected to ask for Adams' resignation and select an acting surgeon general while his permanent pick for the role — Dr. Vivek Murthy — undergoes Senate confirmation.

Biden last month announced he will nominate Murthy as US surgeon general, a role Murthy held for about two years under the Obama administration until he was asked to resign by the Trump White House in 2017.

President Donald Trump's White House had requested Murthy resign with about two years remaining in his standard four-year term, a dismissal some Democrats criticized at the time as politicizing the position.

Trump then nominated Adams, an anesthesiologist who previously served as the Indiana state health commissioner, to the job in 2017. Adams' four-year term was set to expire in September.

Adams is be one of several Trump officials involved in the President's Covid-19 task force asked to step down as the Biden's team takes over the federal response to the pandemic.

In a statement shared on Facebook Wednesday, Adams thanked his staff and defended his time as one of Trump's most visible spokespeople in informing Americans about the pandemic, sometimes contradicting the President.

"In the face of a once in a century pandemic, I sought to communicate the rapidly evolving science on this deadly adversary, and arm people with the knowledge and tools they needed to stay safe," he wrote. "I wasn't always right -- because no one was, and this virus continues to humble all of us -- but I was always sincere in my efforts to speak to every day Americans, and address the terrible health inequities this virus exposed."

The Post also reported that in choosing an acting surgeon general, the Biden administration will bypass Deputy Surgeon General Dr. Erica Schwartz, a rear admiral who plans on retiring in light of being passed over. Schwartz did not respond to the Post's request for comment. A top Trump administration official confirmed to the Post that Schwartz is retiring.

If confirmed by the US Senate, Murthy would play a key role in the administration's response to the Covid-19 pandemic.

Murthy has been a top health adviser to Biden since the campaign. He was part of Biden's public health advisory committee when the Covid-19 pandemic first hit the US and has been serving as a co-chair of Biden's coronavirus advisory board during the presidential transition.

The incoming Biden administration is hoping to move into a "new phase" of the federal government's coronavirus response, including naming a new task force and retiring the "Operation Warp Speed" moniker under Trump for the vaccine effort.

Biden has picked Dr. David Kessler to be the chief scientific officer of the Covid response, taking over for Moncef Slaoui, who has led the effort during the Trump administration. Slaoui has agreed to stay on another month to "ensure a smooth transition," a Biden transition official told CNN.

Biden has asked Dr. Anthony Fauci, the director of the National Institute of Allergy and Infectious Diseases, to also serve as his chief medical adviser on Covid-19.

CORRECTION: A previous version of this story misidentified Deputy Surgeon General Erica Schwartz. She is a rear admiral with the US Public Health Service (USPHS) Commissioned Corps.