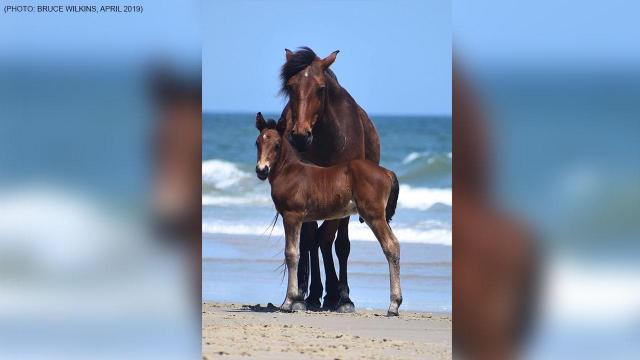 Corolla, N.C. — A wild horse died Friday when it choked on an apple a human left on the beach, according to the Corolla Wild Horse Fund.

Officials believe "Danny," a yearling colt, had the apple in his esophagus for days before someone recognized the horse was in distress and called for help.

The Corolla Wild Horse Fund reached Danny Friday evening and, under a veterinarian's order, administered a sedative in attempts to relax the horse's esophagus and allow the apple to pass.

Danny was transported by trailer to the veterinarian. Although the sedative allowed the apple to pass, the fruit was lodged in Danny's throat for so long that it caused an infection and likely ruptured the horse's esophagus, according to rescuers.

Although Danny was treated quickly, he died around 7:30 p.m.

"He most likely suffered a traumatic head injury from thrashing around for days while he was choking, and it's also likely that the damage to his esophagus caused bleeding into his lungs," a post on the Corolla Wild Horse Fund page read. "If this is hard for you to read, we can promise you it was much harder to witness in person, and it was absolute hell for Danny to suffer through."

According to the Corolla Wild Horse Fund, it is illegal to feed the wild horses, which have a highly specialized diet of native plants and grasses.

Another young horse died once after after eating watermelon rind that had been tossed out into a yard.

"Even food that domestic horses can usually tolerate, like apples and carrots, can be harmful to the wild horses. If the horses become accustomed to taking food from humans, chances are high that they’d have to be removed from the wild," the Corolla Wild Horse Fund website reads.

People should never approach wild horses. Corolla visitors and residents should never leave food or garbage on the beach and report any violations.