Warm hearts at an icy elopement 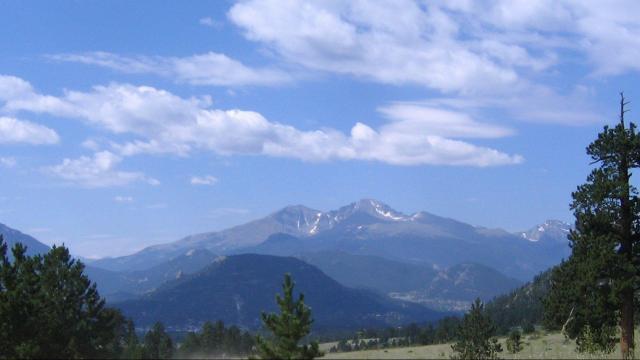 At their self-uniting ceremony in Frisco, Colorado, on Jan. 6, the first thing Sarah Bishop and Kacey Harris did was play a round of rock-paper-scissors. That was their way of deciding who should say their vows first. The couple were standing beside Dillon Reservoir, which was frozen, surrounded by the Rocky Mountains, covered by new snow and crisscrossed with animal tracks. The sun had just risen, but not the temperature. It was zero degrees. Harris won, so she began.

This was the third wedding the couple had planned, with each one getting smaller and smaller. First, they sent out save-the-date cards for a wedding they had hoped to have this year in Hawaii on March 5, the 10th anniversary of the day they decided to date each other exclusively. Last fall, they gave up on that idea as the pandemic worsened. Undaunted, they moved the date to Oct. 22, 2020, and organized a low-key ceremony by a remote lake in Granby, Colorado. They canceled that wedding days beforehand when the East Troublesome Fire, one of Colorado’s largest wildfires, overwhelmed the area.

So, although they’d always wanted to get married next to water, they settled for ice. There were no guests, just their two miniature schnauzers shivering at their feet. The couple chose to get married there partly because the state allows paw prints (as well as the handprints of young children) on marriage licenses. “We’ve been fixated on getting married in Colorado because we love our dogs,” Bishop said.

In a way, this wedding was perfect for the brides whose relationship has been long, adventurous and full of challenges that they have clambered over like so many snowbanks.

The couple live in San Antonio, where Harris, 34, is a bookkeeper for a wealth management firm and Bishop, also 34, is a senior operations analyst for Medtronic, a medical device company. When they met, on the dating site eHarmony, Bishop had recently graduated from the University of Texas at San Antonio while Harris was living in Austin, working various jobs and taking courses part-time at Austin Community College. On Feb. 19, 2011, Bishop pulled up outside her home to pick her up for their first date.

“She was wearing tight jeans and these black boots she still has,” Bishop said. “She has the most beautiful hazel-green eyes and of course her hair was curled and I was like, ‘OK, this is going to be a good night.’” Bishop’s own hair is always blow-dried and thoughtfully styled (her mother, Margarita Bishop, is a hairdresser). Although Bishop thought Harris was beautiful, she wasn’t sure they’d have good chemistry. “She was nothing like my type,” Bishop said. “No. 1, I’d never dated a white person. I’m Hispanic, even though my last name is ‘Bishop.’ I come from a huge family. My mom has 13 siblings. My dad had eight siblings.”

Over dinner, Bishop said she was charmed by Harris’ “little twang accent.” Harris grew up in small towns in Texas and Louisiana and sounds like a country singer when she talks. Harris liked Bishop’s dimples. “She just seemed so kindhearted,” Harris said. “I could tell she had a strong work ethic and she was very funny.”

Before they met, Harris had only dated women. Bishop, who grew up in San Antonio, dated guys until she found herself attracted to female classmates as a teenager, feelings she hid from her parents. “I actually came out to my brother in high school,” Bishop said. “I was like, ‘I have something to tell you.’ He said, ‘What’s wrong?’ I said, ‘Just don’t tell Mom. I like girls.’ And he said, ‘Oh Sarah, you made me think you were pregnant.’”

That night, Bishop ended up staying at Harris’ place. “I had a king-size bed,” Harris said. “I was like, ‘I’ll sleep on this side, you sleep on that side. I promise, I’ll be a lady.’”

They soon declared themselves girlfriends although Bishop was more reticent about the relationship, especially after Harris revealed she was creating a scrapbook documenting the music festivals, wine tastings and road trips that made up their early dates. “It scared me,” Bishop said. “I thought she was going to be a stage-five clinger.”

Those fears dissolved at the end of their first year together when Harris’ grandfather and Bishop’s father both died. Bishop, who describes herself as someone who hates to show emotions, found herself openly grieving with Harris. “I never let anyone in, at all,” she said. “I don’t know what it was about Kacey. Actually, yes I do. She loved so easily.”

After two years, Harris transferred to the University of Texas at San Antonio, where she graduated, and moved in with Bishop, not an easy transition. They argued about little things like Harris’ daily run to Starbucks. (“I was like, ‘Babe, that adds up!’” Bishop said.) And, more serious things like the fact that Bishop often seemed more like a mentor or a parent than an equal, always encouraging Harris to work hard and get good grades. “She hated that I was mothering her,” Bishop said. “She wanted a partner. I didn’t see that until we almost broke up.”

They sought advice from song lyrics and the Sunday sermons at Oak Hills Church, a nondenominational church in their neighborhood. “What brought us closer together was going to church,” Bishop said.

In 2017, the couple moved in with Bishop’s mother in San Antonio, which brought them even closer together, in every way. “Her house was a little over 1,000 square feet,” Bishop said. “Imagine that with three women and five dogs. I don’t know how we survived.” The couple recently bought their own house and often spend weekends working on it. “I’m very handy,” Bishop said. “I got my daddy’s tools after he died. I installed our ceiling fans. I installed a storm door. I installed our chandelier.”

Harris said, “We fight over who gets to mow the lawn, we love it so much.” They began talking about getting married mainly because they want to have children, soon.

Bishop said she grew even more confident about spending her life with Harris in the weeks before their wedding when Bishop’s mother became sick and was in and out of the hospital with liver disease. Harris visited her often. “She helped my mom shower, washed her hair and body, helped her dry off, rubbed lotion on her feet and legs and brushed her hair,” Bishop wrote in an email. “I don’t know many people who would do this.”

Harris said she was acting out of gratitude. “Sarah and her family have always made me feel loved,” she said. “They showed me what love is supposed to feel like.”

Still, over the years, Bishop’s mother and large family had never openly acknowledged that Bishop and Harris were gay, partly because Bishop never voiced it herself. “I don’t know if it’s a Hispanic-Catholic thing that you don’t talk about it,” she said. She added, “For the longest time, it was, ‘Her friend, Kacey.’”

Days before the wedding, Bishop finally came out to her mother. “I cried and told her, ‘I’m getting married,’” Bishop said. “She said, ‘It’s OK. I’m so happy.’” While saying their vows, the brides wore olive green bomber jackets over gowns they chose when they thought they’d be getting married in warmer weather. Bishop’s sleeveless lace dress appeared about as protective against the elements as tissue paper while Harris wore a semi-sheer gown with an open back (she stuffed hand warmers down the front and cappuccino-colored leggings were visible underneath).

For their first (and only) dance, they took off their jackets, set up a speaker in the snow and gingerly sidestepped to their favorite Adele song, “One and Only.” “No twirling or throwing me down or anything!” Harris said.

About a week earlier, Harris made a list of some things, 41 to be exact, that she loves about Bishop. The list, which she shared via email, included:

“She looks at me like I’m the most beautiful person in the world.”

“Without her the thermostat or WIFI would never actually work.”

“She never gives up on me, even when I’m at my worst.”

“She still kisses my forehead and opens the door for me.”

“She is everything I never knew I needed.”

The Wedding Gifts: The brides gave each other gifts before the wedding. Harris gave Bishop a wristwatch with “I love you more every second” engraved on the back. Bishop chose a necklace for Harris, one with a locket containing the first photo they took together when they were 24 and had just met.

The Marriage License: The brides signed it right after the ceremony and had their dogs “sign” it, too. They brought along a black ink pad for that purpose, pressed the dogs’ paws on it, and blotted their paw prints on the license.

Their Names: Harris plans to take Bishop’s name. After the wedding, she said, “I’m finally a Bishop.”

The Reception: The couple celebrated over lunch in Frisco at Outer Range Brewing Company, where they cut a small two-person cake, designed like a mountain with snow melting down the sides. Then, they changed into black jumpsuits and went snowmobiling in the surrounding mountains. Bishop’s mother, who followed their activities on FaceTime from her hospital bed, died 11 days later, on Jan 17.