Want to Name a New Frog? A Whiskered Mouse? An Orchid? Be the Highest Bidder 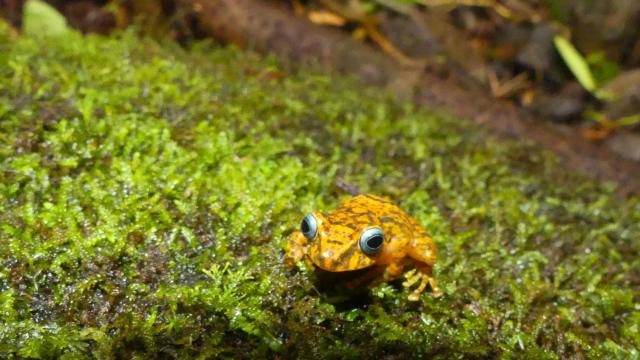 A spider bears Bernie Sanders’ surname; Michael Jackson has a crustacean to call his own; and Donald Trump’s name graces a moth found in Southern California. (The researchers likened the yellow scales on the moth’s head to the president’s hair. Now it’s known as Neopalpa donaldtrumpi.)

In trying to make sense of the 1.3 million species that humans have identified, scientists have a long tradition of bestowing new discoveries with a scientific name. Think Tyrannosaurus rex or Felis silvestris catus.

The privilege of naming a new species typically lies with the person who discovered it. Only in the past few decades have researchers started to delegate that task to someone else: the highest bidder.

On Saturday, Rainforest Trust, a conservation nonprofit based in the United States, will complete its auction of the rights to name 12 newly discovered plant and animal species from South America. The winners can name them after their mother, their pet dog, a car company — pretty much anything. The group says the money will be used to buy land where that species lives in an effort to save it from extinction.

But some scientists chafe at the idea of selling the rights to name a species, and see it as the latest example of Westerners co-opting developing countries’ biodiversity. Others worry it will turn species exploration into a cutthroat commercial endeavor.

“If we leap into something and don’t anticipate what can go wrong, then we’re leaving ourselves vulnerable,” said Douglas Yanega, an entomologist and taxonomist based in California. “There are so many possible ways that it can go badly.”

The conservation group, which started accepting bids in November, is using a conventional auction house that sells art and antiques to sell the rights to name the 12 species from Ecuador, Colombia and Panama. The minimum bid for each species is $10,000.

Up for auction are four frogs of varying shades, four species of orchid and a reddish ant with a trap-jaw. There’s also a gray forest mouse with impressively long whiskers, a wormlike amphibian and a burnt-orange salamander with tiny legs.

Paul Salaman, the chief executive of Rainforest Trust, is familiar with the objections to species-naming auctions. In the early 1990s, these auctions were a new concept when Salaman, a field biologist, sold the rights to name a species of songbird he discovered in Colombia. There were some conservationists who were outraged at the idea of giving companies the chance to impose their brand on the natural world, he said.

Salaman’s counterargument is that the threats to these species posed by climate change and industrial blights, like logging, are far more pressing than the threat of artificial names.

“The name itself doesn’t really matter,” Salaman said. “The key is the funding to save the species.”

The practice of playfully naming new species after celebrities, friends and enemies is as old as the practice of binomial nomenclature, the scientific naming of organisms.

Carl Linnaeus, an 18th-century Swedish botanist and the first scientist to consistently apply binomial nomenclature, used species naming to both honor and mock his contemporaries. According to the book “Linnaeus: The Compleat Naturalist,” Linnaeus named a yellow coneflower after his mentor. He also named an unpleasant-smelling weed after Johann Siegesbeck, a German botanist and one of Linnaeus’ enemies.

These scientific names are meant to last forever. In an extreme example, a Croatian entomologist named a Slovene beetle after Adolf Hitler in the 1930s, when he was chancellor of Germany. Because convention does not allow for name changes, Anophthalmus hitleri has endured.

When someone discovers a new species of plant or animal, the protocol is to publish a peer-reviewed paper in a scientific journal that establishes the evidence behind the discovery and unveils the name to the world.

A group called the International Commission on Zoological Nomenclature establishes the basic rules for animal species naming. (There’s a separate group for plants.) But the organization’s commissioners, who live all over the world, are divided on the subject of species-naming auctions, said Gwynne Lim, the group’s secretary.

There are several conservation groups that have staged these auctions, including the Wildlife Conservation Society, which drew headlines in 2005 for auctioning off the rights to name a monkey discovered in Bolivia. An internet casino company, GoldenPalace.com, was the winner with a bid of $650,000.

Lim, a taxonomist in Singapore, said it bothered her that bidding on these auctions seemed to be driven by the attractiveness of the species, perpetuating disproportionate funding shortages for research on species that are less pleasing to the human eye.

Salaman said that in the current auction, the species considered to be more attractive, like the Ecuadorean frog, were estimated to close at higher prices.

“The highest-selling names are the adorable creatures or the lovely flowers,” Lim said. “But the groups that are most under threat aren’t particularly lovely. Like the worms.”

She is also skeptical about Westerners spending tens of thousands of dollars for the opportunity to name a species that is part of another country’s ecosystem and culture. She said her uneasiness stemmed, in part, from the long history of white European expeditioners claiming the biodiversity of other continents as their own.

Salaman countered that many of the species on the auction block were discovered, in part, by scientists native to that home country who want to fend off extinction.

Juan Guayasamin, an evolutionary biologist specializing in amphibians, said that as long as the money raised by the auction was going to a noble cause — like funding conservation — then he would not be bothered by foreigners naming species native to Ecuador, his home country.

“What we gain is far more important,” said Guayasamin, who is with the Universidad San Francisco de Quito. “Finding funds is really a problem we struggle with a lot.” Most taxonomists agree that funding for their work has been increasingly elusive, and that the scope of their mission — cataloging the world’s species — is unbelievably vast.

Scientists say there are millions of species on this planet that have gone undiscovered and unnamed. It is likely that many will go extinct before humans learn that they exist.

But Yanega, who is also a commissioner with the nomenclature commission, fears that if species-naming auctions go mainstream, they have the potential to do more harm than good to scientists’ collective project of describing the world’s species. For one, Yanega said, turning species naming into a profitable endeavor could encourage fraudulent taxonomists to churn out discoveries to make themselves money unless scientists can develop safeguards.

And in a community that relies on collaboration, making species naming a lucrative practice could make scientists secretive about their work and covetous of their own specimens, which are usually shared liberally with other researchers, Yanega said.

“It could become cutthroat,” he said. “Every man for himself.”