Tarboro, N.C. — It is called the Wall That Heals, and for the next few days it brings the healing power to Tarboro.

The replica of the Vietnam Memorial is on display through Sunday. An opening ceremony was held Thursday to recognize it and the people who made the ultimate sacrifice.

It's a three-quarters size replica of the memorial in Washington, D.C. The Edgecombe County Veterans Museum brought the exhibit to Braswell Park. Thursday's ceremony included a flyover from Seymour Johnson Air Force Base in Goldsboro. Planes thundered across the sky for the opening ceremony.

Now, this is a time and place for quiet contemplation.

James Marsh knows his name might have been here.

"Four went over, two came back," he said. 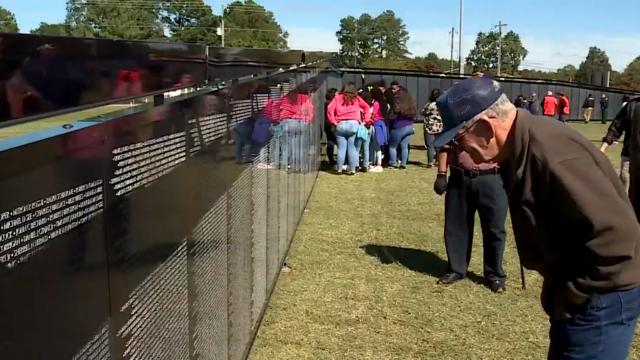 Marsh was only 17 when he and his three buddies signed up for the Marines. They were heading to Vietnam.

"I always thought I was lucky, I was smart," Marsh said.

But then, he knows his two buddies were smart.

"You didn't have to be ignorant to get killed," Marsh said.

As rain fell, he helped put up this replica of the Vietnam Veterans Memorial. And then, as night fell and the soft light fell across the names, he stood alone.

And he feels the wall's power to heal. 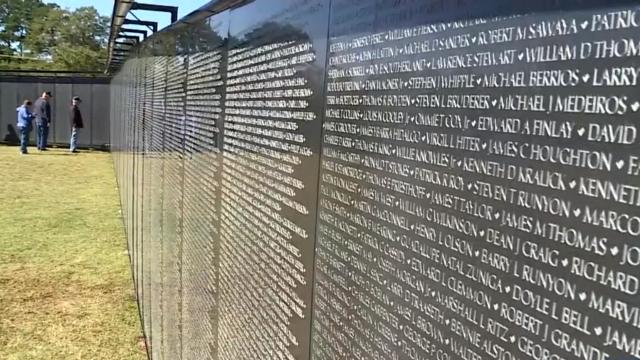 He leaves something beneath the names ... a couple of bags of fruit snacks.

Something mundane to show a monumental gratitude. To touch a name is to stir something deep inside. With a pencil on paper, Cynthia James Sykes rubs the name of her cousin, Sergeant Martin Batchelor.

"I got chill bumps and almost wanted to cry," Sykes said.

She remembers her family getting the news of her cousin's death.

"It was very bad on his mother," Sykes said. "She sounded like a wounded animal. It just stuck with me all these years."

So she had to come, to reach through the years.

Johnny Thompson had to come, to reach his cousin. His name was on the wall: Thomas Bradley.

"It just shows you the horrors of war," Thompson said. "All these young guys, most of them losing their lives before they even had a life."

Today's youth now come to the wall to see how much of our nation's youth we sacrificed in a war a half century ago.