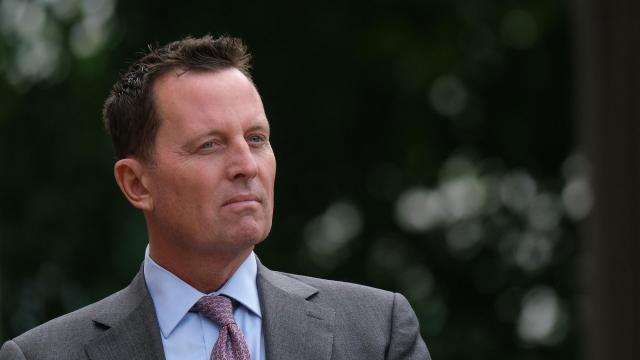 But it remains unclear why the DNI did not release the list and a senior Department of Justice official told CNN they do not intend to do so. The official said the DNI has provided information to the department that it will review to the extent that it can to assist in ongoing investigations.

The ODNI official declined to say how many people were on the list but CNN has previously reported that there were "multiple requests" for Flynn's identity to be revealed between the 2016 presidential election and Trump's inauguration in January 2017.

The revelation of Flynn's identity is also among the matters under investigation by John Durham, the Connecticut prosecutor whom Barr appointed to look into the origins of the Trump-Russia investigation.

The Wall Street Journal and ABC News were first to report Tuesday's declassification news, which was also promoted by the President early Tuesday.

While US citizens names are required to be kept secret in intelligence reports, senior officials do have the ability to ask for names to be revealed in certain circumstance to better understand the reports. In the past, some Obama officials have acknowledged requesting to identify people but have insisted there were legitimate reasons.

The decision to release the names was made by Grenell, a Trump loyalist, and came days after Attorney General William Barr's controversial decision to drop a criminal case against Flynn.

On Thursday, the Justice Department filed a request to a federal judge to drop the case against Flynn, whose lies about his contacts with Russia prompted Trump to fire him three years ago. Flynn later flipped on Trump, pleaded guilty to lying, and cooperated in the Russia investigation. But he reversed course last year, started attacking the Russia investigation, and tried to undo his guilty plea.

The court must formally approve the DOJ's request to dismiss the case.

Tuesday's news also comes as Trump is facing scrutiny on two fronts -- Senate testimony from top health officials and members of the coronavirus task force about the White House's response efforts and a Supreme Court hearing on the necessity of allowing lawmakers to access the President's tax returns.

While the ability to declassify documents of this nature is fully within the purview of the DNI, there are clear questions about the political motivations behind this specific move by Grenell, whose tenure as acting DNI appears to be coming to an end pending the confirmation of Trump's permanent pick for the job, Rep. John Ratcliffe.

Grenell has taken on an increasingly prominent role in helping the President reshape the narrative surrounding the 2016 investigations into Russian efforts to help Trump win the election and possible ties to the President's campaign.

Along with Barr, Grenell has moved to release documents that predecessors at Justice and the DNI had been slow to release.

Many of the documents illustrate the alarm among US national security officials in 2016 about Russians' election interference, and the effort by US officials to figure out why the Russians were seeking to aid Trump's election, and why Trump and people associated with his campaign seemed to be openly and discreetly encouraging such help. Some of the documents also show missteps in those investigative efforts.

With the 2020 election looming, Trump and allies in Congress and conservative media have highlighted parts of documents to claim there was an Obama administration conspiracy to target Trump and his campaign.

And while Grenell has insisted that the declassification is about increased transparency, the material notably does not include a transcript of Flynn's calls with former Russian Ambassador to the US, Sergey Kislyak, during the Trump transition in 2017.

Those calls have only been summarized but factored into a core piece of the Mueller investigation.

Overall, the level of unmasking has increased under the Trump administration in the last three years. There were more than 10,000 unmaskings last year and nearly 17,000 in 2018, according to ODNI's Statistical Transparency reports. There were 9,529 in 2017 during Trump's first year in office.

When unmasking happens, identifiable information about an American is revealed to the official who asked for it. This could be a person's name or address, or the name of a company.

In September 2017, multiple sources told CNN that former President Barack Obama's national security adviser Susan Rice told House investigators that she unmasked the identities of senior Trump officials out of concerns about the propriety of the United Arab Emirates Crown Prince Sheikh Mohammed bin Zayed al-Nahyan's visit to the United States in late 2016. During the visit, which took place during the transition period before Trump was sworn into office, the crown prince met with Flynn, the president's son-in-law, Jared Kushner, and adviser Steve Bannon in New York, sources said at the time.

The Obama administration felt misled by the UAE, which had failed to mention that Zayed was coming to the US even though it's customary for foreign dignitaries to notify the US government about their travels, according to several sources familiar with the matter at the time.

Rice told the House Intelligence Committee she requested the names of the Americans mentioned in the classified report be revealed internally, a practice officials in both parties say is common.

The meeting preceded a separate effort by the UAE to facilitate a back-channel communication between Russia and the incoming Trump White House.