Wall Street craves certainty but all it's getting is chaos 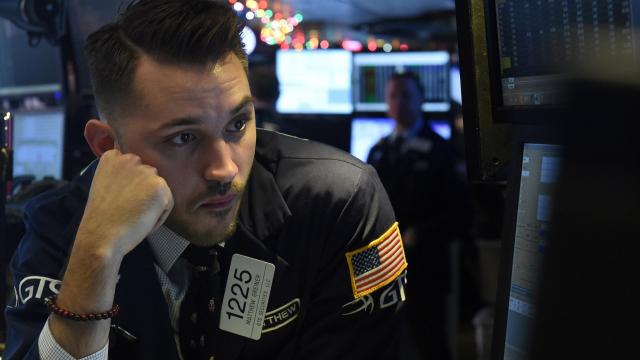 (CNN) — Wall Street, markets and business crave certainty. For the past month, they have been contending with confusion and disorder.

Uncertainty abounds at the end of a volatile year: Investors question the Federal Reserve's plans for 2019, and President Donald Trump asked aides if he could fire Fed Chairman Jerome Powell. Congress entered a budget stalemate with the president, partially shutting down the government. Trade policy that for years tried to stitch economies together is in retreat. Economists warn that the pace of US economic growth will slow next year.

To cap that off, Treasury Secretary Steven Mnuchin issued a bizarre statement Sunday, saying he called top bank executives to assess their liquidity. He asked if they had the ability to continue lending to consumers and businesses — at a time when confidence in banks had been high.

That set already jittery investors on edge. Stocks followed their worst week since the Great Recession by plummeting yet again Monday. The last time the market fell this much in December was in 1931, during the Great Depression.

Investors are now worried about five big items going into 2019.

1. Mnuchin may know something we don't. Or not

Bear markets happen. Several stock indexes are down 20% from their highs, yet US markets' descent has happened relatively gradually — until recent weeks.

Mnuchin used crisis language when he said banks have "ample liquidity" and "markets continue to function properly." No outward signs pointed to a crisis, contagion or liquidity concern in the financial system. Suggesting as much jolted the stock market.

Trump has complained that Mnuchin hasn't done enough to stabilize markets, according to a person familiar with the matter. The statement left observers wondering: Was Mnuchin trying to placate Trump, or does he know something the markets don't know?

2. The mix of higher rates and slowing economy growth

Businesses and investors were already on high alert because rates are going up as economic growth is slowing. They have good reason to worry that Powell's Fed may be too aggressive on its rate increases. The Fed lowered its growth estimate for the US economy last week, and it is notoriously horrendous at predicting recessions.

If it raises rates too quickly, the Fed could artificially slow the economy or even bring about a recession. Inflation is not currently a problem, so the central bank has the ability to slow its rate-raising pace if it wants.

The Fed signaled it would raise rates only twice next year after raising them four times in 2018. New York Federal Reserve President John Williams sought to reassure investors Friday that the Fed will remain flexible about its rate-raising and balance sheet policy if the markets take a turn for the worse. But investors weren't buying it: The Dow fell more than 400 points Friday.

3. Trouble at the Fed

The Fed is only doing its job: It is expected to independently assess the state of business and the economy and determine the best course of action for monetary policy. Yet Trump threatens to undermine a Fed chair that he appointed his own appointed Fed chair by publicly criticizing him and privately asking if he can fire him.

Investors may not like the uncertainty that higher rates could bring — but firing the Fed chair 10 months into his term would be a different can of worms entirely.

For months, Trump has been lashing out at Powell, the nominee Trump considers the worst of his presidency. Trump believes Powell is to blame for this year's market turmoil, but few thought Trump would actually fire him, which could create chaos in the markets. Yet CNN and other media reported that Trump has begun polling advisers about whether he has the legal authority to fire Powell.

Mnuchin tried to calm markets Saturday by tweeting that Trump never suggested that he would fire Powell — and Trump doesn't believe he has the right to oust the Fed chair. But Trump's ouster of Defense Secretary James Mattis months ahead of his planned resignation date concerned investors that Trump may not be listening to his advisers.

On Monday morning, Trump again attacked the Fed, likening it to a golfer who has lost its their "touch."

The government shutdown probably won't mean much for the economy in the near term, but Washington's dysfunction isn't a great sign.

Far more meaningful than a shutdown is Congress' duty to lift the debt ceiling later next year.

After starting to recover after the Great Recession, federal deficits are rising again — and that means Treasury will have to borrow more to make up the gap between what the government spends and brings in. Lawmakers must pass a law next year so Treasury can continue to borrow without any restrictions. If they fail, the government could default on its debt.

That very nearly happened in 2011, and credit-rating agency Standard and Poor's downgraded America one notch below a perfect AAA. Another downgrade could make the United States' already massive debt load much costlier to pay back.

The US-China trade war is on hiatus until March, but it still looms over the economy and markets.

The Trump administration is threatening to raise tariffs on billions of dollars worth of Chinese goods if China fails to meet US demands on a variety of economic and political issues.

Trade has dominated much of the conversation in 2018. It says a lot about the chaos in Washington that trade is currently the least of the market's concerns.