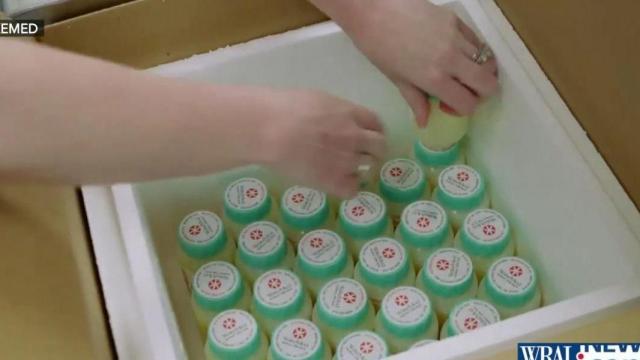 WakeMed's Mothers' Milk Bank is looking for new breast milk donors and will travel to Chapel Hill later this month in its Mobile Milk Bank to share more information about what it takes to become one.

Potential donors can learn more about what's involved to donate their breast milk, take part in in-person interviews and go through a free screening, which includes tests for Hepatitis B and C, HIV, HTLV and syphillis. At the same time, approved donors who live in the Chapel Hill area also can drop off their donations at the event. They'll also offer free car seat checks and blood pressure checks.

WakeMed’s Milk Bank, which I've written about before, is one of just 25 non-profit milk banks in the U.S. – and the only milk bank in North Carolina – accredited by the Human Milk Bank Association of North America.  Located at WakeMed Cary Hospital, the Milk Bank provides safe, pasteurized donor milk to babies in neonatal intensive care units in North Carolina and along the East Coast. According to WakeMed, it dispenses about 17,000 ounces of donor milk to hospital neonatal intensive care units each month. Thanks to its donors, the Milk Bank also stores an estimated 20,000 ounces of processed donor milk and another 40,000 ounces in raw milk.

The milk is critical for some of the more than 10,000 premature babies who are born in North Carolina each year. Breast milk has antibodies that can protect against disease, illness and intestinal infections, which can be life threatening for premature babies. But, because many sick premature babies aren't able to breastfeed, their mothers often aren't able to pump enough milk for them. For a baby in the NICU, milk donations can be essential to life, according to WakeMed.

Interested in becoming a donor? Here's some more information about what it takes:

More information about the Milk Bank and how to donate is on WakeMed's website.