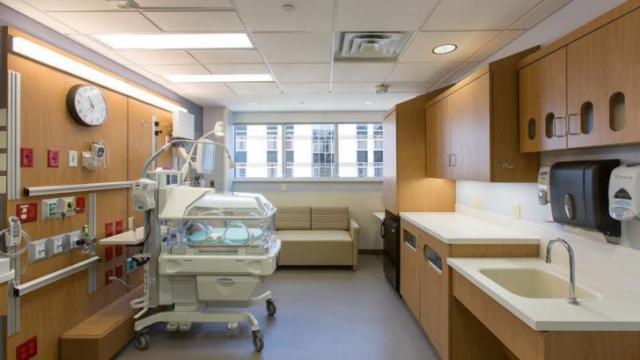 WakeMed's Raleigh Campus is the first hospital in the area to provide private rooms for both mom and baby in the neonatal intensive care unit.

The Level IV NICU expansion at the Raleigh campus opens today. With the project comes single-room care for moms and their newborns who need special medical attention.

The expansion adds 12 beds for a total of 48 neonatal beds at WakeMed. Those beds include 27 in private rooms where families can spend almost unlimited time with their baby, according to WakeMed.

The proximity also will allow for some privacy while new moms are breastfeeding or pumping or for mom and dad to practice what's called kangaroo care or skin-to-skin care when a parent holds a diapered baby against her bare chest. Kangaroo care has many benefits for sick and healthy babies. It can help babies maintain body warmth; regulate heart and breathing rates; and gain weight, according to the March of Dimes.

The rooms also have a refrigerator so moms can store their breast milk.

I can imagine having their often very sick little ones so close to them during those critical first days and weeks will be a huge blessing for lots of families out there.

WakeMed also is expanding the role of its NICU volunteers, I'm told. Volunteers began rocking babies years ago. Now they will read to the babies, keep the babies calm if they are undergoing treatment and more.