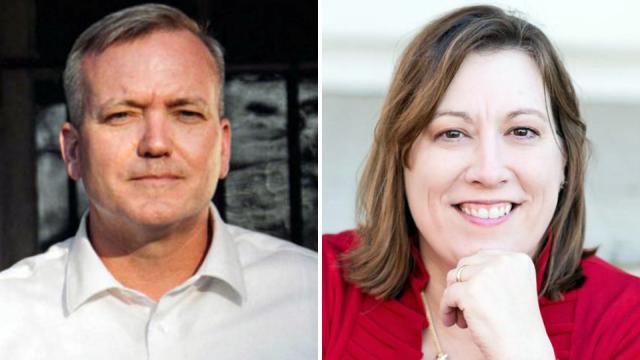 Raleigh, N.C. — Two former Wake County commissioners were turned aside Tuesday in the primary elections for the county's new regional district on the Board of Commissioners.

Holly Springs lawyer John Adcock bested Phil Matthews, who served as commissioner from 2010 to 2014, by a 54-46 percent margin in the Republican primary, according to unofficial results.

In the Democratic primary, Vicki Scroggins-Johnson, a Morrisville Town Council member, topped Lindy Brown, who served as commissioner from 2006 to 2010, by a 56-44 percent margin, according to unofficial results.

The new District B encompasses half the county's roughly 1 million residents and forms a sort of doughnut around the outside of Raleigh and Cary, taking in the county's small towns and rural areas.

Wake County has been divided into seven districts, but commissioners were voted on countywide. Under the new system, which state lawmakers created last year, countywide voting was eliminated for the seven districts, and two regional districts were added, creating a nine-member board.

Proponents of the changes say it gives smaller communities a bigger voice on the Board of Commissioners, but opponents said the Republican-led General Assembly became interested in the Wake County board only after Democrats swept all of the seats in 2014.

Both Adcock and Scroggins-Johnson campaigned on providing new leadership for the county, which faces growth management issues for schools, roads and other infrastructure. Scroggins-Johnson said western Wake County also needs more representation on the Board of Commissioners.

In Durham County, incumbent Democratic commissioners Wendy Jacobs, Ellen Reckhow and Brenda Howerton appear poised to rejoin the board, but commissioners Michael Page and Fred Foster are in danger of losing out in the 10-person race with about half of precincts reporting, according to unofficial results.

No Republicans filed to run for the Board of Commissioners, so the five Democrats who emerge from the primary will run unopposed in November.

Incumbent commissioners Marshall Faircloth and Jimmy Keefe were two of three Democrats who advanced to the November election in Cumberland County.

Likewise, incumbents Renee Price and Penny Rich won races on the Orange County Board of Commissioners, where they face no opposition in November. But Commissioner Mark Dorosin was in a tight battle to retain his seat against Jamezetta Bedford.