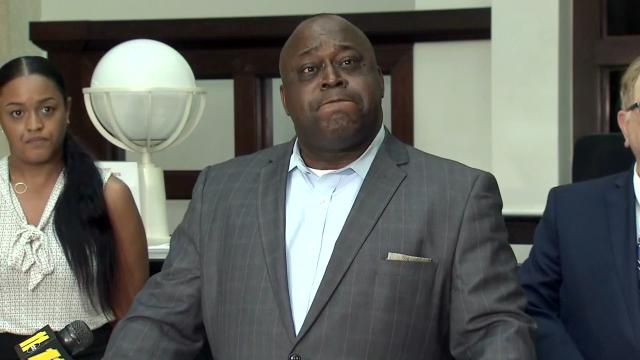 "We all want what is best for the residents of this county," Baker wrote before pointing the finger at the previous administration of Sheriff Donnie Harrison.

"Upon my election, this administration inherited various known and unknown obligations that required immediate attention and restructuring. ... [T]he County Manager's Office and others in attendance were enlightened on the numerous inherited concerns, abnormal circumstances and everyday situations that needed to be addressed," he wrote.

Included in the sheriff's response is the 44-page business plan presentation he made to county staff in October.

The email outlined several issues that needed correction, including how Baker was offering vendor contracts, sometimes without going through the proper bidding process and without receiving permission to offer a no-bid contract. Supporting documents also raised questions about the sheriff’s office terminating existing contracts without even telling the vendor.

In his defense, Baker blamed contracts he inherited which favored the vendor.

"The challenge of contract processing was due in large part to doing our due diligence," he wrote. "This began with examining the services and agreements pertaining to the various vendors. It was quickly determined that many contracts had evergreen clauses, were in pre-printed form with one-sided language favoring the vendor and did not have the mandatory language now required by the county. Our office aggressively negotiated contracts to remove language that was unfavorable to the county and language that was not applicable to the contract."

In response to a concern about a major food service contract canceled before its expiration and the vendor replaced without bidding, Baker said the food vendor needed to be replaced immediately as a matter of safety for the inmates. He included a series of photos to support that case.

In late September, Ellis sent another memo to the sheriff, which focused on personnel changes.

Among the issues: hiring or placing employees in positions prior to approval, placing employees in new positions they were not qualified to perform and converting detention officers to higher-paying senior positions despite a detention officer shortage. Ellis also touched on the contract issues, including the fact that the sheriff’s office waited too long to submit some new contracts, which delayed their approval.

Baker defended changes he made in reclassifying employees to a higher pay grade, saying he was working to reduce overtime to balance out the higher salaries. He also pointed to additional training he has implemented for field officers.

Baker disputed and defended allegations that he and his staff circumvented rules and policies in paying for travel and purchases and in handling cash. He explained each as an isolated incident, often involving personnel turnover, that had been rectified.

County leaders fired back late Thursday, standing by the memos and vowed to make sure the sheriff follows protocol.