Raleigh, N.C. — After more than a year of debate over how to implement the Wake County Public School System’s controversial new student assignment policy, the district on Monday unveiled drafts of two long-term plans aimed at maximizing student achievement while providing families with more stability and choice.

“We believe these two proposals for student assignment can be the foundation of a long-range strategy,” Wake schools Superintendent Tony Tata said. “These are not finished products by any means, but they are concrete enough that we can bring them to our parents and citizens and ask for their feedback.”

The school system posted a link on its website, where parents will be able to enter their address and see student assignment options that would be available to them under the proposed plans. – neither of which are new but are based on previous plans put before the school board.

“They address many important priorities that have been expressed by residents of our district: community-based schools, programming choice, diversity, efficient use of resources, stability and achievement,” Tata said.

The plans released will be open for public comment until June 12. Based on the feedback, Tata said, the plans will be adjusted as necessary before he makes a recommendation to the school board in mid-June.

The chosen plan would take effect with the 2012-13 school year. 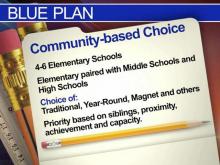 Under the so-called "blue" plan, or the “Community-Based Choice” plan, parents can choose from four to six elementary schools, each of which is paired with a middle and high school.

Parents can pick from traditional, year-round, magnet and other schools, including achievement schools with specified high-performing teachers.

Students get priority based on whether they have a sibling at the school or live close by. The district will also take into account achievement balance and capacity at any individual school. 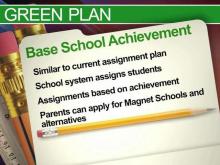 The "green" plan, also known as the “Base Schools Achievement Plan,” is similar to the current assignment model. Under it, the school system assigns students based on student achievement, ensuring that students from low-performing areas end up at high-performing schools.

Parents can still apply for magnet or other alternative schools.

“By keeping the magnet system in place, with some modification, both plans generate academically diverse populations at schools,” Tata said.

While he believes both plans will hold up to any potential legal challenges, he says he thinks the “blue” plan seems to allow “a little bit better stability and elasticity” to accommodate growth in the state’s largest school system, which currently enrolls more than 143,000 students.

He has said that he expects 80 to 90 percent of parents will be pleased with the options and would get to send their child to the school of their choice.

Both plans would cap enrollment so that students can't cluster in schools where the demand is greatest.

Tata recognizes that no plan would make everybody happy, he said.

“No plan can satisfy 100 percent of the need, but we hope these two plans will be the starting point for greater stability and choice – a family-friendly approach to student assignment that maximizes every student’s academic potential,” he said.

Amid protests and sit-ins by community groups, students and parents opposed to eliminating the district’s longstanding policy of busing students to achieve socio-economic diversity, the school board voted 5-4 last year to move to the community-based model.

Supporters of the board's action said the old policy resulted in long bus rides for some students and did not deliver on promised gains in student achievement.

Vocal critics, such as the state NAACP, said changing the policy would create pockets of poverty in the school district, result in high teacher turnover and keep lower class students from receiving the same quality of education as their counterparts.

The group’s complaint has led to a federal civil rights investigation.

State NAACP president Rev. William Barber said Monday that the association would deliberately analyze both plans and their implications.

“The question of any plan that comes forward is, No. 1, how is it better than the plan we had,” he said. “Secondly, the goal must be a high-quality, constitutional, well-funded, diverse public education for every child.”

Last month, the superintendent previewed the plans for school board members, and, despite a year of divisive battles over how to implement the new policy, was met with cautious approval from both sides.

Board member Keith Sutton, who voted last year against the policy change, said Monday that he sees promise and potential with both options.

“Both take into account student achievement, which addresses in a way – maybe not in
the same way but at least in a similar way – the diversity piece that we felt like was missing from the other plans that were put on the table,” he said.

Other board members, said they are leaning toward the “blue plan.”

“I do believe in parental choice, and I do believe in schools that are proximate to home, and I believe in an opportunity to better balance the system in the face of growth,” board member John Tedesco said.