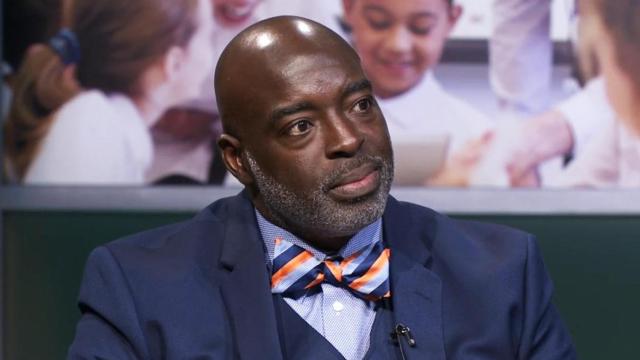 Raleigh, N.C. — A Wake County school board member announced Saturday he is running for North Carolina superintendent of public instruction in 2020. Board Vice Chair Keith Sutton joins a growing list of candidates running for the elected position, which oversees 115 school systems, 1.5 million students and 180,000 full-time public school employees across the state.

Sutton made the announcement on the Education Matters TV show, which airs on WRAL. Michael Maher, assistant dean of professional education at North Carolina State University, James Barrett, a Chapel Hill-Carrboro City Schools board member, and Jen Mangrum, an associate professor at UNC-Greensboro's school of education, have also announced they are running.

Current State Superintendent Mark Johnson has yet to announce whether he will run again. Johnson, a Republican, ousted Democrat June Atkinson, the longest-serving state superintendent in the nation, in 2016. At the time of his election, the 33-year-old was the second-youngest statewide elected official in the country. He won with 50.6 percent of the vote.

WRAL News reached out to Johnson's spokesman to ask about his political future but did not receive a response.

Sutton, a Democrat, has served as a member of the Wake County Board of Education since 2009 and served as the board chair in 2013.

"I am happy and excited to announce that I am a candidate for state superintendent," Sutton told Education Matters host Keith Poston. "I think I have the experience, being on a board in Wake County, the largest school district in the state, 16th largest in the country. I've been on the board almost 10 years."

Raising teacher and principal pay, providing more support for struggling schools in rural areas and helping students with social-emotional learning are among his top priorities.

"I have the experience," Sutton said. "I have the commitment. I have the leadership to lead this state and put us back on a plan of trajectory, where North Carolina is seen as the best state in the country for education."

Sutton is the founder of FocusED LLC., a firm designed to support organizations in the improvement and transformation of education. He previously spent time as the excellence director for BEST NC, an education think tank.

For nearly two decades, he worked on various boards and committees including the state’s NAACP, Triangle Urban League, Healthy Schools Task Force, Raising Achievement and Closing Gaps Task Force, the Greater Raleigh Chamber of Commerce, the Southeast Raleigh Assembly and the Blue Ribbon Committee on the Future of Wake County.

Maher, an assistant dean at NC State, announced last month that he is running for state superintendent as a Democrat, his first run for public office. He was previously a public school teacher in Forsyth and Wake counties.

"It is time to renew our commitment to public schools in our state," Maher said in a statement. "We have a longstanding tradition of providing a quality education. Unfortunately, some politicians in our state legislature have retreated from that commitment and our schools are paying a heavy price. We are in the midst of a critical teacher shortage, we ask those who choose to teach to do more with less, and we lack a coordinated effort to systematically address our most pressing challenges. Public schools represent our shared commitment to the children of North Carolina, we have an obligation to them. As the North Carolina superintendent of public instruction, I will be a tenacious advocate for public education in North Carolina."

Maher currently serves as the president of the North Carolina Association of Colleges and Teacher Educators, vice chair of the North Carolina Professional Educator Preparation and Standards Commission and is on the board of directors of the American Association of Colleges and Teacher Educators. He has 23 years of experience in public education.

Barrett has been on the Chapel Hill-Carrboro board for eight years, two years as chair. He has spent his entire career in corporate IT leadership, according to his website, managing large teams across the globe, leading large projects and budgets.

"I don’t believe education (nor government) needs to run like a business, but I know how to lead people, work systems, and prioritize investments to achieve better results for students, teachers, parents, and our state," Barrett said in a statement on his website. "There are many challenges facing our schools, including some which have been self-inflicted. I have ideas for how to reduce the impact of testing on our students, teachers, and time for instruction. I believe equity must include adequate funding for all North Carolina students to receive access to a great education, and I will fight to truly prioritize this investment in our state’s future. I believe that DPI can provide resources for our teachers and then 'get out of the way' so that the professionals who have the most impact on students can build relationships and deliver great results."

Mangrum has more than a decide of classroom experience and a decade in teacher preparation at both UNC-Greensboro and North Carolina State University. She ran for NC Senate District 30 against Senate President Pro Tem Phil Berger in 2018.

"The people of North Carolina deserve the best public education system in the country and nothing less," Mangrum said in a statement. "I have proven my commitment as a fierce advocate for students and educators and a skilled and passionate leader in our state. Under current leadership, we have watched elected officials make decisions in their own self-interest, on a journey to obtain more power in government. We need a teacher leading our schools, not a lawyer."