Wake releases second draft of school assignment proposal. See how your children could be affected. 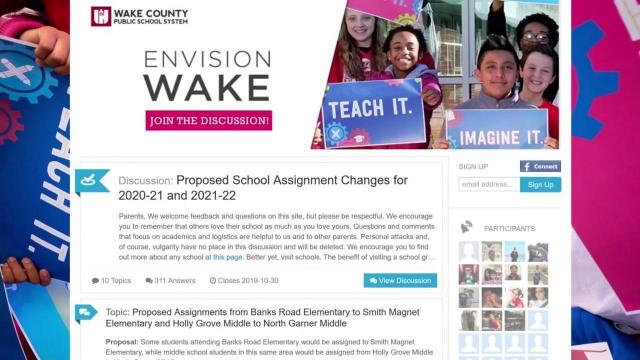 Cary, N.C. — As the Wake County Public School System prepares to open two new schools, district leaders discussed the second draft of a new 2020-21 school assignment plan Tuesday that could affect thousands of students. Some of the changes were made in response to parent feedback.

Changes made in Draft 2 of the proposal include:

The proposed student assignment changes are being made in response to the district building two new schools to keep up with growth and help prevent overcrowding in the next two years. The new schools are:

Wake County Board of Education Chairman Jim Martin thanked families for sharing feedback about the proposal and said while some changes have been made in response to that feedback, not all requests can be granted.

"I do want to acknowledge the frustration, the heartache that comes with student assignment," he said.

Under the new student assignment proposal, some students would be eligible to request to grandfather and stay at their current school. Grandfather requests can be made during a special application period Dec. 11-20. Grandfathered students do not receive district transportation.

Draft 2 marks the final recommendation from Wake schools' staff. Any changes to the proposal going forward would come from the direction of the school board.

Parents can continue to share feedback and ask questions on the district's online forum. They can also address the board directly during a public hearing on Nov. 19 at 6 p.m. If necessary, the board will discuss any additional changes at a work session on the afternoon of Dec. 3. A final vote is expected at the regular board meeting starting at 5:30 p.m. on Dec. 3.

The proposed changes come as the school board is discussing ways to balance student diversity across schools. Board members have discussed using county economic health data, including household income, food stamp usage, rent and mortgage rates and poverty levels, to help guide their long-term work.