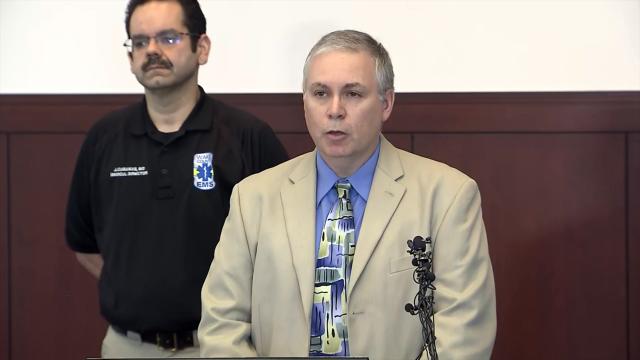 The man contracted COVID-19 after visiting a nursing home near Seattle that has seen several deaths and dozens of illnesses from coronavirus.

Officials said he arrived back in the Triangle on Feb. 22, traveling through Raleigh-Durham International Airport, but didn't experience any symptoms until Feb. 25. He wasn't tested for coronavirus until Tuesday, however, leaving a seven-day gap that has area residents concerned.

Where did he go during that time? How many people did he have contact with? How long was he actually contagious while out and about?

Chris Kippes, director of Wake County's Public Health Division, declined to answer those questions Wednesday, saying it's an isolated case and that he doesn't want to stoke public fear over the virus that has expanded worldwide in recent weeks.

"At this time, there is no reason for the public to panic," Kippes said at a news conference. "We want to spread facts, not fear."

"I'm very sympathetic to people who need different levels of information, I want to make that clear," he added. "One thing we can do now as a public is do things that we can control."

That means following the common refrain of good hygiene: wash your hands, cover your face with your arm when you cough or sneeze and stay home if you feel sick.

Local public health staffers are monitoring the man – he remains isolated at home, and his family is quarantined there – and are reaching out to other people who had close contact with him, Kippes said.

"For those circumstances where they were out in the public, they provided us with the information to do our appropriate public health follow-up with those individuals," he said.

None of those people has been tested yet because they haven't shown symptoms of the illness, he said.

Kippes and North Carolina Secretary of Health and Human Services Dr. Mandy Cohen said that, because the man didn't have any COVID-19 symptoms when he arrived at RDU, people who were at the airport that day don't need to be concerned.

But information from the Centers for Disease Control and Prevention doesn't align with that stance.

But the CDC website states that, while coronavirus is believed to be most contagious when the patient is the most sick, "some spread might be possible before people show symptoms."

Kippes said his staff hasn't reached out to anyone who was at RDU that day, noting that those individuals aren't of public health concern.

Some RDU travelers said they aren't too worried yet.

"I care a lot about my health. I eat really well, and I haven’t really been sick in over 20 years," Joe Kleman said.

"We’ve got how many people in the metro here? And you have one case," Kris Niebergall said.