After being spared death sentence for killing neighbors, Wake Forest man pops off in court

Raleigh, N.C. — A Wake Forest man who avoided a death sentence for the murders of three of his neighbors three years ago insisted Monday that he was framed, blasted prosecutors and his defense attorneys and threatened jurors before being led off to prison.

Jon Frederick Sander was convicted a week ago of gunning down Sandy Mazzella, 47, his wife, Stephanie Ann Mazzella, 43, and his mother, Elaine Mazzella, 76, in their home on March 25, 2016.

Prosecutors sought the death penalty against Sander for the brutal murders – all three victims were shot several times at close range with a pump-action shotgun. But jurors deliberated for almost five hours over two days before recommending the life sentence.

Before Superior Court Judge Graham Shirley imposed the sentence, Sander went on a 27-minute rant, railing against the Mazzellas and the justice system and implicating Sal Mazzella, Sandy Mazzella's father and Elaine Mazzella's husband, in the killings.

"Everything's a lie and a scam," Sander said. "This whole thing was fabricated. Sal killed his family for the insurance money."

Sal Mazzella choked back tears earlier in the hearing as he forgave Sander for killing his wife and the parents of his grandchildren.

"Wait till I'm done with my speech," Sander replied, sarcastically applauding after Sal Mazzella finished, despite his hands being shackled.

Shirley cut Sander off when the convicted killer started telling jurors he would be set free on appeal and wouldn't forget their faces. The judge then lit into him as he handed down the sentence.

"You love the spotlight," Shirley said, noting that Sander repeatedly spoke directly to a camera in the courtroom. "You've delighted in your celebrity. Let me tell you something, as horrific as this crime was, when the light goes out in this courtroom today ... the memory of you in the eyes of the public is going to fade, and it's going to fade quickly.

Sander admitted to investigators that he shot the Mazzellas, but he maintained that he had been overcome with rage and had "snapped." 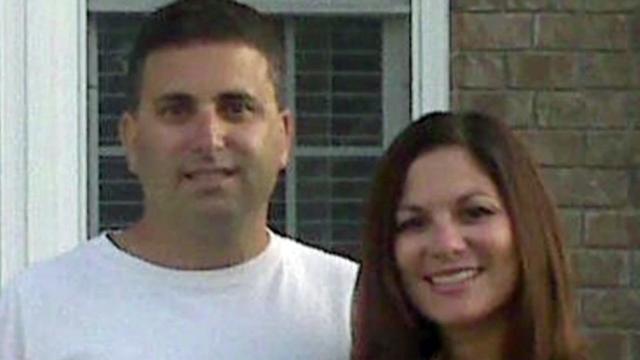 He lived next door to Sandy and Stephanie Mazzella, and he and Sandy Mazzella worked together in a landscaping business. But difficulties in dissolving the struggling business and an allegation that Sander touched a member of the Mazzella family inappropriately sparked a feud that escalated quickly in early 2016.

The Mazzellas took out restraining orders against Sander in February 2016, when Sander was charged with threatening the family. The orders expired the day before the shootings, when a judge said there was no reason to extend them.

In the videotaped interview, which took place several hours after the shootings, Sander told a Wake County Sheriff's Office investigator that he feared losing his family because of the molestation allegation, so he wanted to "get even" and grabbed a loaded shotgun in the garage and headed next door.

During his rambling statement Monday, Sander said he had no problems with the Mazzellas before the restraining orders, saying he was a "caring friend" to Sandy Mazzella who tried to help the business grow in every possible way.

But the restraining orders, an attempt by Sandy Mazzella to charge him with auto theft and the molestation accusation sent Sander over the edge, he said in court.

During the sentencing hearing last week, the defense presented testimony that Sander suffered from mental health problems, including being bipolar, that went untreated and likely contributed to his actions.

Sander said he blasted his way into the Mazzella home and fired shots near both women and one shot into Sandy Mazzella's abdomen before leaving. But he said all three were already dead, noting that he was too drunk to notice then and remember later when he spoke to investigators that the victims were already on the floor when he went inside.

The Mazzellas' son, Nicholas, wasn't at home during the shootings. On Monday, he pointed out that Sander destroyed two families that day three years ago.

"Was what you did really worth the consequences?" Nicholas Mazzella asked. "Now, your kids don't even get to see you anymore."