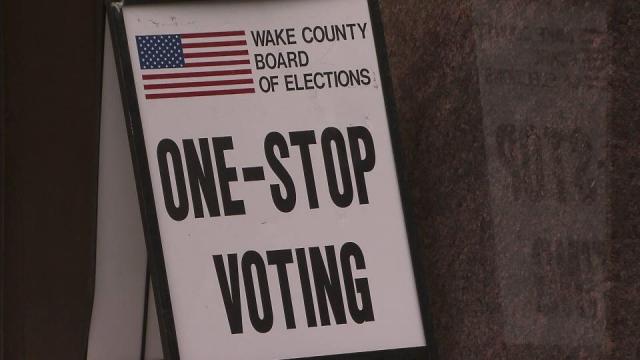 Raleigh, N.C. — A lack of county funding has Wake County elections officials mulling over how to stretch their budget to keep early-voting sites open for this fall's presidential election.

The Board of Elections was considering cutting the number of one-stop polling places for November's election by 25 percent. But members voted Friday to reconsider after a public hearing at which 27 people spoke against the move.

The board had asked county commissioners for $3 million for early voting, but received only $1.7 million – enough, says election board staff, to keep only 11 of the 15 sites from 2008 open this year.

They would also be open fewer days and fewer hours. Overall, the number of hours available for early voting would be cut by half – from 1,456 hours in 2008 to just 725 hours this fall.

That didn't sit well with any of the speakers at Friday's hearing.

"There is something missing with this picture," said Raleigh resident Gene Alston. "It’s going to take the right away from thousands of North Carolinians."

"You guys need to make it work," community activist Octavia Rainey told the three-member elections board. "You need to bring back 15-plus sites. I don't care how you do it."

"I need to say to the three of you, I don’t get this," said Sandra Johnson.

The election budget has to cover not only early voting sites, but also staff, training, equipment and paper. As a result of redistricting, there will be 102 different ballot styles this fall – far more than the 42 ballot styles in 2008.

Each polling place must have all ballot styles available, since voters from any district can go to any site.

Bob Hall, executive director of the nonprofit Democracy North Carolina, says early voting is even more important this year, because longer ballots and more ballot styles could mean longer lines and confusion for voters, especially if they wait till Election Day to vote.

"We're headed for a train wreck, if you take that perspective," Hall said. "We've got to come back and re-orient and think about a better plan"

The Elections board voted unanimously to send the proposal back to the drawing board. Chairwoman Aida Doss Havel says staff will have to look for ways to stretch the budget.

"It may be that we'll go back to the county commissioners and ask for more money," she said. "I hope that we don't have to do that. I hope that we can be creative and find ways that we can have increased early-voting and a few more sites."

One possibility, Doss Havel said, might be to adjust election-day staffing at precincts where many voters cast their ballots early.

Another idea, she said, is to open early-voting sites a little later in the day.

Board staff has proposed adding an early-voting site at North Carolina State University. Critics say parking would be nearly impossible for off-campus voters. Proponents, however, say the number of students, staff, and others who could walk to the site justifies the addition.

Election staff have also been asked to consider adding sites at the Chavis Community Center near downtown Raleigh, the north and south campuses of Wake Technical Community College and locations in Fuquay-Varina, southeast Raleigh, and Morrisville.

The elections board will meet again in early August to consider an updated plan.

Meantime, two of 2008’s most popular early-voting sites are off the list this year.

Polling sites at Cary Towne Center Mall and Triangle Town Center Mall served a combined 43% of all early voters in 2008.

Havel says mall owners have refused to allow electioneering inside the malls, so those locations are no longer legally eligible.