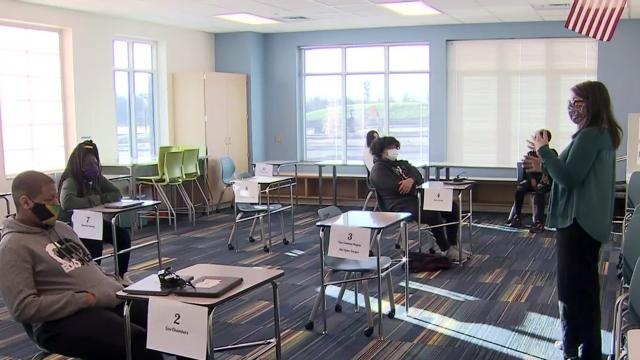 Raleigh, N.C. — The first of many years of expected enrollment decline has hit the Wake County Public School System.

It’s the first drop in students in decades.

The more than 3,000-student decline for the state's largest school district was buoyed by students not enrolling in or attending their traditional schools during the COVID-19 pandemic.

At the same time, district officials expect lower enrollment through 2030 because of lower birth rates.

“We expect birth rates to trend downward for the next 10 years,” Emily Lucas, Wake County’s chief financial officer, told the Wake County Board of Education earlier this week.

Martin presented the enrollment projections to the school board earlier this week. The district will likely have an increase in enrollment next year, with kindergarten and first grade students increasing in numbers, Martin told the board.

But that’s not guaranteed and won’t last long-term, he said.

“It’s very hard to predict the response coming out of this pandemic,’ Martin said. “We may continue to see flux into the 2021-22 school year and beyond.”

The district reopened schools at least part-time to all students this week, after being mostly remote for the past 11 months. While many parents across the county have petitioned the Wake County district for more in-person instruction, many private schools across North Carolina have been open for in-person instruction.

More families are now eligible for private school vouchers. Opportunity Scholarship data as of Feb. 3 show 12,832 students have been awarded vouchers — more than most recent years — although fewer than half have enrolled, per the North Carolina State Education Assistance Authority.

A desire for in-person instruction is what prompted Jessica Arner to take her son Beckett out of Wake County public schools and place him in a homeschooling co-op.

The rules on when schools would be open and how many could be in school left Arner uncertain what would happen for the school year.

“It just seemed very up in the air,” Arner said.

Nicole Cribbs, a Johnston County parent, withdrew her daughter Paisley and enrolled her into the private Kids R Kids kindergarten in Clayton so Paisley could learn inside a physical classroom.

“It is expensive, I will say that,” Cribbs said. “But I'd rather have her have that face-to-face learning. The actual teacher in the room, and her having actual interaction with children because she's a very social child.”

Wake County will double-down on its marketing efforts to families, whom Martin thinks are already hearing from schools outside of the district.

“They may not know the long history of excellence that the school system has, so they begin to look at all their choices, and if they don’t see us marketing ourselves as a district and they’re only receiving communications from others then certainly that’s going to catch their eye,” Martin said.

But recruiting is only part of the enrollment struggle.

Birth rates declined during the Great Recession, resulting in flat enrollment growth across North Carolina since the 2017-18 school year, and haven’t returned to pre-recession levels.

Statewide, birth rates are down 9% from 10 years ago, said Alexis Schauss, chief business officer for the North Carolina Department of Public Instruction.

Wake County officials expect COVID-19 to result in a lower birth rate, as well, and expect enrollment to largely remain below last year’s levels through 2030. That year, officials expect the Wake County Public School System to enroll about 157,600 students, slightly fewer than are enrolled this year and a number not previously seen since 2015.

Average daily membership — enrollment — in traditional public schools is down statewide by nearly 62,000 students from about this time last year, according to North Carolina Department of Public Instruction data analyzed by WRAL. Public charter school enrollment has risen by about 8,600 students. That means public schools have enrolled about 53,000 fewer students this year. The extent to which lower birth rates, student transfers to private or home schools because of COVID-19 precautions, and children simply not attending school this year have impacted enrollment is unclear.

Data on the number of students enrolled in home schools or private schools this year won’t be available until July. Enrollment in home schools has been trending upward for years, and the Wake County Public School system told board members this week that statewide applications for new home schools topped 10,000 this year.

Wake County’s unadjusted enrollment decline wasn’t as stark as some other school districts’ declines. Charlotte-Mecklenberg, Durham County, Orange County, Chapel HiIl-Carrboro and Guilford County all reported bigger drops than Wake County. The statewide drop was 4.4% for the second month of this year and last year, from 1,418,051 students to 1,355,120 students.

Wake County plans to survey parents who withdraw their children from the school district to learn more about why they did so. Such a survey had been in the works before the pandemic but went by the wayside once it hit. Board member Karen Carter asked again for such a survey at the board meeting Tuesday, and officials said they plan to revive it, although analysis of survey responses may only give lagging indicators of why parents withdrew their children, Superintendent Cathy Q. Moore told the board.

Wake County counts about 1,200 students more than usual in violation of attendance mandates, likely because of COVID-19. The county has factored that into its average daily membership totals, which otherwise would have been 4,200 fewer students than usual, 2.6% drop. The district reports an average daily membership of 158,883 students this year, a drop of 1.9% compared to 161,907 students last year. The number the district reported to DPI, unadjusted, was 157,673 students.

For next year, the Department of Public Instruction expects more students to enroll across the state, though it doesn’t have official projections for each district yet. But because nearly every traditional public school district — 108 of 115 — experienced a drop in students, school funding for the fall will rely on projections more than usual, Schauss told the State Board for Education earlier this month. Last year, only 41 districts had lower enrollment.

That means a lot more districts may end up seeking adjustments in the fall, if they enrolled more students than the projection their funding was based on, Schauss said.

In the last several years, including this year, the department has projected enrollment statewide within 0.5% of what it actually ended up being. But being off by just a little can mean a lot for larger school districts, Schauss said.

Districts seeking adjustments can have their funding changed, but not as it relates to being a low wealth or enrollment of disadvantaged students.

Statewide, charter schools have nearly doubled in number since the North Carolina General Assembly lifted the cap of 100. Enrollment in charters has about tripled, Schauss said.