The device, called the BolaWrap, deploys an 8-foot long cable from a small remote, about the size of a cellphone. The cable wraps around a suspect, and sharp hooks latch onto their clothing so they are effectively lassoed and can't move. 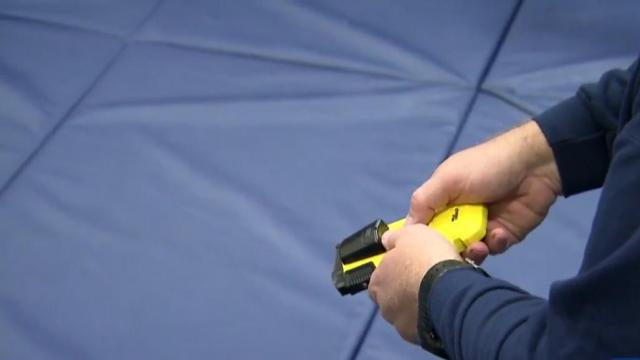 While non-lethal, the device is powerful, quickly deploying the Kevlar tether with a sound that resembles a gunshot. The tether can be aimed at a suspect as far away as 25 feet.

Its creators said the BolaWrap could be especially useful to safely detain someone suffering from mental illness. It's also a non-lethal restraint for individuals who do not adhere to deputies' commands.

On Tuesday, a representative from BolaWrap said the lasso system is designed to protect officers and suspects. The quick movement and pressure from the tether may surprise a suspect, he said, but it should not hurt them.

So far, 70 law enforcement agencies across the United States are using the tool, including some in North Carolina. Tuesday's demonstration will help Wake County decide whether to invest in the wraps, which run about $1,000 per unit.

John Midgette, executive director of the Police Benevolent Association that represents more than 50,000 sworn officers across the state, said, "Anything that could help officers do their sworn duty while while enhancing public and officer safety is certainly worth exploring."