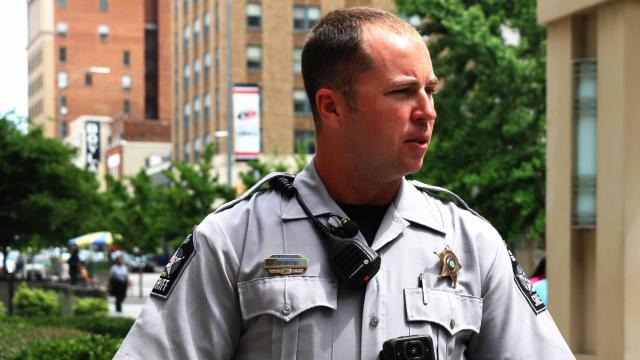 Many law enforcement agencies in North Carolina and around the country have turned to body cameras to capture in vivid detail what happens when officers are on patrol.

But the use of the technology has raised questions about costs – and not just the expense of purchasing the pricey hardware.

'So many advantages': Wake sheriff plans to outfit all deputies with body cams

The Wake County Sheriff’s Department has considered equipping its deputies with body cams.

Sheriff Donnie Harrison said he likes the idea of his deputies using the hi-tech gear.

“There are so many advantages,” Harrison said. “I think it’s great and I don't have a problem with it.”

North Carolina state law does not require local law enforcement agencies to use body cameras, but encourages their use by awarding state grants. The Governor’s Crime Commission, a state panel that provides funding for criminal justice initiatives, awarded out three grants in 2017 to body camera projects, according to the panel’s website.

Brian Robbins, of GovDirect, a consulting firm that helps state governments with their technology needs, has been working with the Wake sheriff’s department to find them the most efficient and cost effective body camera for their department.

The body cameras that Wake County is considering may only cost around $1,000. Robbins estimates the department could end up spending around $230,000 for other expenses, which could include training officers mounting equipment for the cameras and installing new camera software in police vehicles.

Robbins said many law enforcement agencies will upgrade their storage infrastructure to the government cloud service Azure from Microsoft. But Robbins believes that the Wake sheriff's department already has the resources it needs to store the videos.

“Storing it locally is more cost effective than any other solution,” Robbins said. “The storage process they have now would work.”

Typically, Robbins said cloud storage is an extra $65 per camera.

Another concern for video footage is how long the video would be stored. Under state law, the body camera footage would not be public record, but primarily used as evidence.

Robbins said that much of the footage would need to be stored for at least 20 years or longer if it was the subject of a lawsuit.