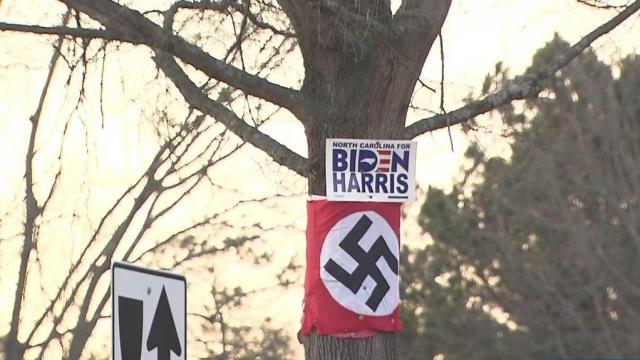 Wake County, N.C. — A Wake County community is feeling outraged and shocked after a man posted a Nazi flag below a ‘Biden Harris’ campaign sign on a tree for everyone to see.

The flag is located at the intersection Old Falls of Neuse Road and River Hill Drive and is easily visible during daylight hours.

“To me it represents a threat to all Jews,” Dinner said. “There’s not a Jewish person that I know that doesn’t see the Nazi flag and feel personally threatened.”

“The Jewish community relations council joins the community outrage and concern in this provocative act particularly in this time when asked to be unified and work together as a community. Nazi’s are who we fought against, to support them in this day is not appropriate.”

Area resident Joshua Covert says there had previously been a Confederate flag in this particular location, but he’d never seen anything Nazi-related.

“We had seen a Confederate flag there before, which we don’t love to see, but people claim it’s part of their heritage,” Covert said. “But today it was a Swastika.”

The Wake County Sheriff’s Office stopped by the property after receiving a litany of complaints, but after a brief investigation, determined the tenant in the home did not place it there.

Police say the property landlord placed it on the tree, and they can’t remove it, since it falls under freedom of speech.

“I would hope that he has the decency and the heart to take it down because who is it helping? It’s hurting a lot of people,” Covert exclaimed.

Margaux Kessler tried to take the flag down but was unsuccessful.

“I just could not get it off my mind and said I need to turn around. So, I went home and grabbed a step ladder and scissors and attempted to cut it down.”

Kessler says at the time, she didn’t know it was private property and was eventually kicked off.

“It was really frustrating to see it up,” Kessler said. “It’s a just a sign of utter disrespect to our nation.”

WRAL spent much of Wednesday reaching out to the property landlord for comment, but got no response.