'We are not going to stop': Wake bus drivers continue sick out for third day even after board decides on bonuses

Raleigh, N.C. — Bus drivers in Wake County are continuing to call out sick to work in protest of low wages and poor working conditions even after the Wake County Board of Education approved a one-time $1,250 bonus for full-time and part-time employees.

The board approved that bonus Tuesday night along with a smaller amount for part-time employees, a pay increase to $13 per hour for roughly 1,600 employees and a 1% increase to the local supplement the county pays toward teacher salaries.

While momentum in the protest has decreased since Friday, many bus drivers say that the pay increase is not enough and they need to continue putting pressure on the board.

"Compared to a normal day, we had an additional 30 drivers out today," according to Lisa Luten, spokeswoman for the district. Around 200 bus drivers called out sick on Friday, she said.

Drivers said that some students were not showing up to their bus stops, likely because parents worried their bus driver would not show up.

Wake approves pay increases for some school employees, while some say they're not enough

One driver, who spoke to WRAL News anonymously, warned of more demonstrations.

"The board needs to understand that we are not playing [around]. We are after to get our raise, and we are not going to stop until we get it," that driver said.

But it's unclear how long the demonstrations will last. Another driver told WRAL News the district is cracking down on bus drivers who have called out sick. They said that drivers cannot be out of work sick for more than three days without a doctor's note.

David Graunke, who drives a school bus in Wake County, said he disagrees with other bus drivers using a sick-out to gain leverage.

"There has to be negotiations with the school board, and I think there has to be a sit down discussion," he said. "Rallies and sick-outs, they are only going to do so much good."

Many school bus drivers in the district say even with the bonuses, they are not able to make ends meet and still have to rely on government assistance to provide for their families.

Members of the Wake County Board of Education agree that employees should be payed more, and says that the state should increase teacher wages. Currently, state funds cannot be used to pay bus drivers more than the current salary maximum of $3,024 a month, according to Julie von Haefen, representative of North Carolina's 36th district,

"We are really hoping the state will step up and do its part," said Chairman Keith Sutton.

"All of these employees are state workers. I know the state is considering raises for our classified staff, they have not received much in terms of raises over the years, so we really need our state partners to step up," he added.

How Wake compares to other districts

While the district has faced some issues in keeping their transportation department staffed, no drivers have gone on strike. 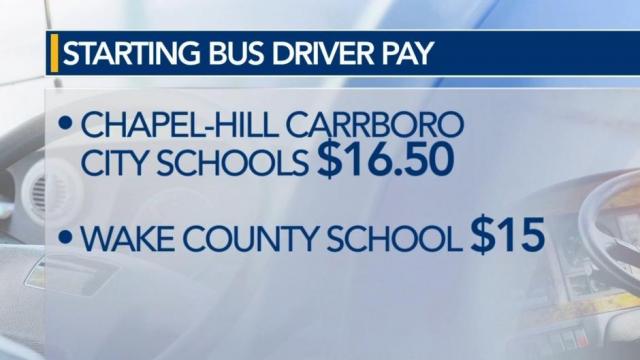 "Compared to Wake County, we are in a little bit better of a position," said Brad Johnson, director of transportation at CHCCS.

He also said that his district is much smaller, which makes organizing transportation a bit easier.

Chapel-Hill-Carboro schools offers a $2,000 bonus to current drivers if they refer a new driver $4,000 signing bonus to new drivers. When drivers returned form the pandemic Chapel Hill-Carrboro gave drivers a 10% raise, while Wake drivers have not received a raise.

The starting salary at CHCCS for bus drivers is $16.50, while in Wake County they get paid $15 an hour starting out.

Those drivers have been doubling up on routes and working longer hours than they were during a typical school year, when the district had more drivers.

Rosa Gill, member of the North Carolina General Assembly who represents the 33rd district, said she would continue advocating for a $15 hourly minimum wage for non-certified school personnel.

“I know that the school bus 'sick out' is having a great impact on families and students. Most of our non-certified school personnel are under paid and that is why the Governor’s and House of Representatives’ budgets proposed a minimum hourly wage of $15. We will continue advocating for the $15 be in this year’s budget.”

Her fellow representative for the 39th district, James Roberson, agrees.

"All North Carolinians should be able to realize financial rewards from their hard work and their contributions to our community. Our bus drivers are true contributors when it comes to the safety and education of our kids. It’s imperative that we do the right thing in ensuring that these folks get the raises they need to keep food on the table and care for their families.”

Erin Pare, who represents the 37th district said, "Republicans in the House recognize the difficult and often thankless job our school bus drivers do each day - that’s why I introduced a bill that would raise pay for our bus drivers, teacher assistants and other non-certified school employees."

Julie von Haefen, representative of North Carolina's 36th district, said that bus drivers are "integral" to the community should be paid a "living wage."

"This isn't an issue that just affects Wake County. Bus drivers all across our state are being asked to take on more hours and drive additional routes, but their wages aren't increasing. Many local governments simply can't afford to pay their drivers more, and right now, state funds cannot be used to pay bus drivers more than the current salary maximum of $3,024 a month.

"Our constitution requires the state to fully fund public education, and that includes providing a living wage to our bus drivers. Fully funding the Leandro plan and raising the state-funded salary maximum for bus drivers in our state budget would free up a significant amount of local funding in Wake County that could be used to attract more drivers and provide short-term salary supplements to drivers who are working through the effects of the labor shortage.”

Most representatives said that the state was not exercising its "constitutional responsibility" and providing sound education to all children. Senator Sarah Crowford, who represents North Carolina Senate District 18, said that the General Assembly has been defunding public education, which is the reason teachers and staff have not been supported.

"Education is where we deliver on the promise of equality and our bus drivers are a critical role in this by ensuring safe, reliable transportation for the children in our state. The legislature must prioritize public education in our state - that includes raising pay for all school workers, including bus drivers, and raising the cap on wages for bus drivers to give our counties more flexibility in attracting and retaining these important workers.

"We must ensure that all workers in our state receive a living wage and it is time the legislature stop giving handouts to corporations and wealthy individuals at the expense of those in our state who need us most.”