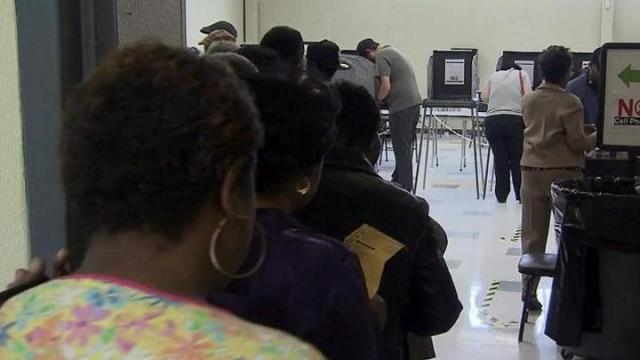 By Matthew Burns and Laura Leslie

Raleigh, N.C. — The idea of requiring North Carolina voters to show photo identification before being allowed to cast a ballot was sharply criticized and rousingly supported Tuesday during a public hearing at the legislature.

Hundreds of people crowded into three rooms for the four-hour House Elections Committee hearing to voice their opinion on legislation that hasn't even been drafted yet. Republican lawmakers said last week that they want to collect as much input from both supporters and opponents before crafting and filing a bill later this month.

"The continued manipulation of the vote is the only logical reason not to have voter ID," said Art Wilson.

ID opponents – many wore white "No Voter ID" stickers on their shirts and lapels – cited statistics showing that cases of voter fraud are few and far between in North Carolina and that minority, elderly and poor voters would be disproportionately affected by the requirement because they are more likely not to have a photo ID.

"The cost and time to get a government-issued ID would be tremendously burdensome," said Sarah Preston, policy director for the American Civil Liberties Union.

Rev. William Barber, state NAACP president, said ID proponents are disingenuous when they say they're only trying to prevent fraud. He called the proposal a "new poll tax" designed to keep certain groups from voting.

"When you tell lies about fraud, you unleash craziness," Barber said. "Disenfranchisement in any way is wrong."

Jay DeLancy, executive director of the Voter Integrity Project in North Carolina, countered arguments that an ID is a solution in search of a problem by noting that his group has found voter rolls statewide padded with illegal entries. That opens North Carolina up to widespread elections fraud.

"Do not water down this law. Do not fall for all the sob stories," DeLancy told lawmakers.

Other supporters said they have worked in local elections and said there aren't many documented cases of voter fraud because no one looks for them.

"This is not a Republican issue. This is not a Democratic issue. It's a common-sense issue to ensure your vote counts in North Carolina," said Al Bouldin, chairman of the Guilford County Republican Party.

Some supporters ridiculed the idea that a large number of people don't have a photo ID, noting that identification is required for banking and applying for most government services in addition to driving.

"It's bogus that we're out here arguing this issue," said a University of North Carolina at Greensboro student, saying that he has three IDs. "This is not about women's rights. This is not about bringing back Jim Crow laws."

Steven Rader of Beaufort County said he has worked for years with Moldova, a former Soviet state that is a sister state of North Carolina, where voter IDs have been required since the country gained independence.

"From my observations, the voter ID requirement has not impaired the right to vote of anyone," Rader said. "If you look at the fact, the system works."

"We have a radical alternative to voter ID by picture, which is your signature," one woman said. "It is very powerful to write your name and swear or attest that you are who you say you are."

Frankie Price, a precinct judge in Orange County, said a mandatory ID would create a burden for poll workers in addition for voters.

"It's going to create a hostile environment by trying to match voters with a fuzzy picture that could be 5 years old," Price said.

Others said IDs would only lengthen voting lines. They called, instead, for more early voting sites and days and better technology to improve voting.

Representatives from AARP, Disability Rights North Carolina and the League of Women Voters also spoke against a required voter ID. Other groups traditionally opposed to the idea said, however, that they recognize Republicans have enough votes to win passage of any bill, and they offered suggestions on how to improve it.

The North Carolina Center for Voter Education said the ID process needs to be as simple as possible and urged lawmakers not to turn anyone away at the polls for lack of an ID. Action North Carolina said funds must be available to help people obtain birth certificates and other documentation needed to even obtain a state ID.