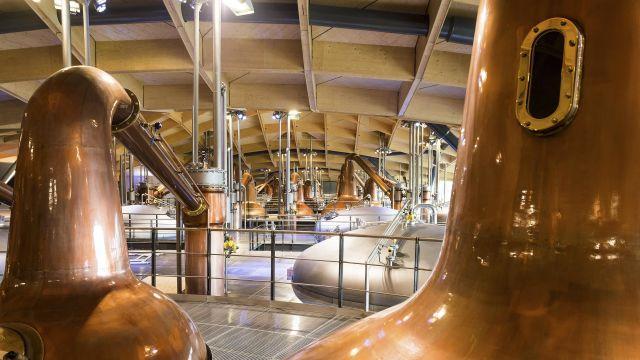 While restoring the 1887-vintage Old Taylor Distillery in Frankfort, Kentucky, Will Arvin and Wes Murry, partners in the business, discovered abandoned train tracks on the property and a passenger depot once used by visitors arriving to tour the bourbon works. When it reopens in the fall, after a 40-year hiatus, as Castle & Key Distillery, the gin and bourbon brand will use the restored Taylorton Station as a museum, tasting room and the gateway to distillery tours. The 113-acre estate was established by the bourbon legend Col. Edmund Haynes Taylor Jr.

“It was a little like Pompeii,” said Arvin. “The magic of the place is that Col. Taylor was the visionary who figured out bourbon tourism was a cool thing.”

Now, it’s not just bourbon, but gin, rye and even limoncello leading a new wave of spirits-driven travel. As with food, wine and beer, traveling to the source for booze has exploded alongside the boom in craft distilleries, up 26 percent from 2016 to 2017, according to the American Craft Spirits Association. It currently identifies 1,600 craft distilleries, defined as those producing less than roughly 315,000 cases annually.

Small distilleries commonly open tasting rooms and offer tours as a way of marketing on a meager budget. Those startups are reimagining the ways they engage visitors, offering spirits festivals, mixology classes, concerts and other activities. Meanwhile, major brands are investing heavily in entertaining visitors with destination architecture, blending workshops and interactive exhibits.

“All of the infrastructure from equipment and stills to actual building structures is a huge capital expense, and we’re seeing all these classes and workshops add additional revenue,” said Peggy Noe Stevens, a Kentucky-based master bourbon taster and marketing consultant who has worked with whiskey brands including Woodford Reserve and Jim Beam. “Any activity that adds entertainment or education is directly correlated to brand loyalty.”

Though popular now, distilleries have lagged behind wineries and breweries in attracting travelers, in part because of regulations that, in many places, prevented distillers from offering samples of their liquor. Rules vary by state but have been loosening steadily since about 2004, and tourism has followed. The Jack Daniel Distillery in Lynchburg, Tennessee, for example, attracts about 300,000 people a year, up from 200,000 10 years ago.

“Distilling is the essence of value-added agriculture since George Washington’s day,” said Frank Coleman, the senior vice president for public affairs at the Distilled Spirits Council, a national trade group, noting that the first president of the United States became a whiskey-maker once he left office. “Slowly but surely the states have liberalized laws,” he added.

For travelers, distillery tours bring the eat-local trend to the bar.

“I see it as an extension of culinary travel,” said Kim Jamieson, the public relations director for South Carolina’s tourism office, which launched Satisfy Your Thirst, a campaign identifying 134 locales from moonshine distilleries to a tea-growing farm, in 2016. “Beyond having a cocktail, people want to know the history behind it.” New distilleries dispense samples and stories, including Waterman’s Distillery in the Finger Lakes region of New York, housed in a 19th-century barn once used by bootleggers during Prohibition. The atmospheric tour of Lost Spirits in Los Angeles includes a boat ride on an indoor river to the book-filled tasting room inspired by “The Island of Doctor Moreau” by H.G. Wells. J.J. Pfister Distilling in Sacramento, Califorinia, contains a museum devoted to the founding family’s earlier business making knitted swimsuits in the early 20th century.

Offering patios, yard games and sometimes food, many distilleries are following the pattern set by wineries to encourage visitors not just to tour but to linger. With outdoor, umbrella-shaded tables and a bocce ball court set on 6 acres, the new tasting room at Seersucker Distillery, a gin-maker in San Antonio, is one of these. Inspired by the immersive Wizarding World of Harry Potter at Universal Studios, its founder, Trey Azar, built the tasting room amid the production center with 360-degree views of the stills and bottling lines and pipes running above the bar.

“The way to make anything approachable is to plop people right in the middle of it and see the process from production to cocktails,” said Azar, who sends visitors home with cocktail recipe cards.

The growth of booze travel is by no means limited to microproducers. In June, Macallan whiskey opened a design-forward distillery built into a hillside in the Scottish Highlands and centered around the visitor experience (15 pounds, or about $19.75), which includes interactive exhibits. The distillery formerly drew 250,000 visitors annually, and Macallan expects to double that this year with the addition of such amenities as a restaurant, Eat@TheMacallan.

In Puerto Rico, Casa Bacardi, where Bacardi rum is distilled, now offers 90-minute mixology lessons ($60) and opportunities to fill your own bottle from an aging barrel ($160).

Buffalo Trace Distillery, near Lexington, where you can make your own bourbon starting at $5,500, added a new boat tour of the Kentucky River ($14) this summer.

In September, the Kentucky Bourbon Trail Welcome Center will open in Louisville with exhibits on bourbon making and directions to its member distilleries.

Like wineries before them, some distilleries are adding inns. In Greenport, New York, both the Matchbook Distilling Co. and the affiliated Lin Beach House, with five rooms, a cocktail bar and tasting room, recently opened.

The Distillery in London, housing a working distillery, restaurant and the Ginstitute gin-making classes, added three guest rooms in late 2016.

In whatever incarnation, distillery visits introduce travelers to the human stories behind the mad-scientist vapors, stills and mashes.

Their proliferation, according to Jeffery Lindenmuth, the executive editor of Whiskey Advocate magazine, “has made distillery tourism accessible to many, many more people. Whether you are in Brooklyn or Bozeman, Montana, you are rarely far from a distillery, which means you can tack a visit on to all sorts of recreation.”