Raleigh, N.C. — A virtual kidnapping scam that originated in Mexico has made its way to the Triangle. A Raleigh family was out $500 before realizing they were being scammed.

Mark Parker said he answered a call from a man who said his son, who happened to be driving back to college in Charlotte, had been in a wreck.

The caller said the people he hit had kidnapped his son and demanded money for his release.

Parker was being sucked into what the Federal Bureau of Investigation calls a virtual scam, which originated in Mexico, but is spreading across the United States.

"For someone to say they're holding a gun to your child's head, and they've been in a car accident is beyond cruel," Parker's wife Rebecca said. "There's no words for that."

Parker went to the Walmart on Glenwood Avenue. The police met him there and contacted his daughter to make sure she was safe.

"I called my brother," daughter Gabby Parker said. "He was okay. I think at this point, my dad was still on the phone with the guy, who was trying to get money from him. It was just an overall scary experience."

Parker eventually transferred $500 to a location in Puerto Rico before he discovered his son was safe.

The FBI offers a few tips to identify this type of scam. 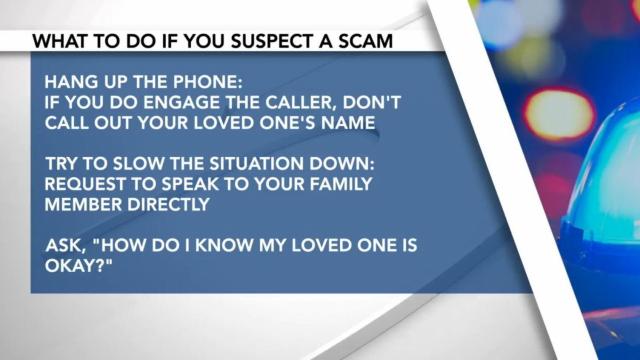 The FBI said if you do suspect you received a scam call, do not call out your loved one's name.

Try to slow the situation down and request to speak with the family member directly.

Indicate to the person that you are suspicious of a scam, and request to speak with the family member before you wire any money.

It is important to contact law enforcement as soon as possible.