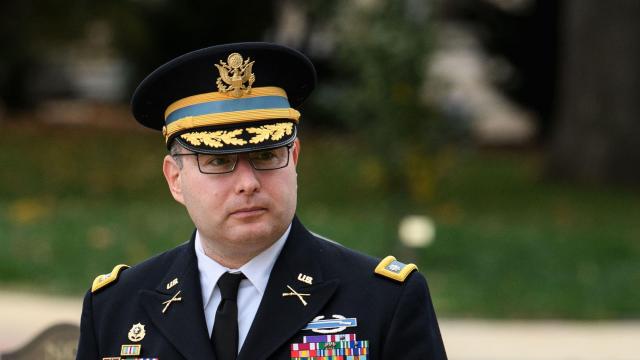 CNN — The National Security Council's top Ukraine expert told House impeachment investigators on Tuesday that he tried to make changes to the White House's rough transcript of the July phone call between President Donald Trump and Ukraine's President, including that Trump mentioned tapes of former Vice President Joe Biden, according to a source familiar with the matter.

Lt. Col. Alexander Vindman testified that one example of his attempts to change the transcript was to include Trump telling Ukraine President Volodymyr Zelensky there were tapes of Biden, which The New York Times reported occurred where there's an ellipsis in the transcript that was released. The change was not made. The assertion that some portion of the conversation was replaced by an ellipsis contradicts the White House's statement in September that the ellipses in the transcript did not represent missing words or phrases. It also contradicts the President who has insisted the transcript the White House released was an exact depiction of the call, even though the memo itself describes it as rough.

Vindman also said that he would have edited the transcript to specifically show that Zelensky mentioned Burisma -- the company that hired Hunter Biden -- rather than just "the company," according to sources.

"He or she will look into the situation, specifically to the company that you mentioned in this issue," the rough transcript cites Zelensky as saying.

Vindman's testimony that some specific details were left out of the rough transcript adds further insight about how the White House handled the call and Democrats' concerns that the Trump administration engaged in a coverup.

Sources from both parties told CNN that the changes were not seen as significant. In his testimony, which came during yet another explosive deposition on Capitol Hill, Vindman testified that the White House's rough transcript was mostly accurate in describing the contents of the July 25 phone call between Trump and Zelensky aside from the edits he wanted to make.

That phone call between Trump and Zelensky is at the heart of the Democrats' impeachment inquiry, following a whistleblower complaint alleging that Trump had solicited foreign interference to dig up information on Biden and his son, Hunter, and the White House tried to cover it up. Vindman is the first person who was actually on the call to testify in front of House investigators.

Vindman testified that he spoke to his twin brother, who works in the National Security Council's ethics office, to discuss his concerns about the July 25 call, according to multiple sources.

In the hearing, Republicans questioned why there weren't more people who raised concerns to the National Security Council lawyers about the call, according to sources. He responded that he was unaware of what his colleagues chose to do.

In a copy of Vindman's opening statement obtained by CNN ahead of his testimony, he says he reported his concerns about the call "internally to National Security officials in accordance with my decades of experience and training, sense of duty, and obligation to operate within the chain of command."

"I am a patriot, and it is my sacred duty and honor to advance and defend OUR country, irrespective of party or politics," the statement said.