Videos of passengers being removed from planes do not indicate federal no-fly status yet, TSA says 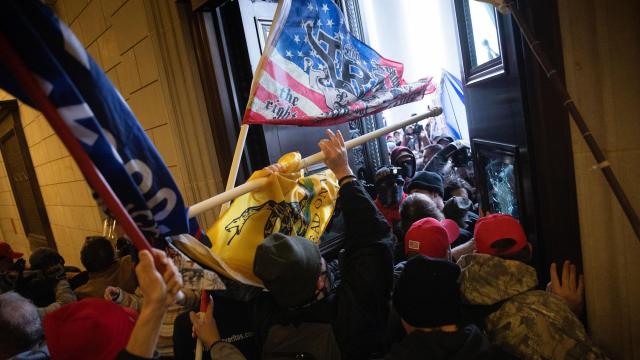 CNN — Videos of belligerent passengers at airports — some donning pro-Trump outfits — being forced off planes or denied boarding are circulating widely on social media, with many users describing the scenes as airport officials informing people that participated in the Capitol riot that they're on a no-fly list. But that's not necessarily the case.

Though at least one member of Congress and airline worker unions have called for known riot participants to be put on the FBI-managed no-fly list, which is designed to prevent known and suspected terrorists from getting airline tickets, it's not clear if that step has been taken.

The FBI did not respond to a request for comment.

Federal officials and DC police are still working to identify and track down many of the rioters, though at least 20 federal criminal defendants have been arrested across the country.

When a person is put on the federal no-fly list, they would be stopped or undergo additional screening before going through a TSA checkpoint, according to the TSA.

That means the widely circulated footage of angry travelers being forced off of planes or screaming in a terminal likely aren't reacting to news that they've suddenly been put on the federal government's no-fly list, according to the TSA. Rather, they're more likely to be depictions of a well-known issue that has been plaguing airlines for months: Flight attendants and airline workers being forced to handle situations in which angry passengers refuse to comply with Covid-19-related safety policies.

Though airline CEOs have said the vast majority of passengers comply with the rules, anti-mask wearers vocally refusing to wear protective gear have disrupted flights in several high-profile cases.

(Conspiracy theories that the President has not disavowed — and that he has occasionally egged on — have attempted to paint Covid-19 as a "hoax.")

Last year, airlines warned passengers that they can enforce their own no-fly lists intended to ban disorderly customers from flying in the future. Hundreds of passengers are currently on those lists.

Airlines and two unions representing flight attendants, however, have said they are concerned about in-flight security as the pro-Trump rioters who stormed the US Capitol last week left the Washington, DC, area — particularly after several altercations on flights to DC ahead of the insurrection.

"We are incredibly concerned about recent politically motivated incidents on board passenger aircraft," read a statement from the APFA president Julie Hedrick. "Regardless of one's political beliefs, the cabin of a commercial aircraft must, out of necessity, be a calm environment for the safety of everyone onboard."

Alaska Airlines said in a statement that it banned 14 passengers that were on board a flight from DC to Seattle a day after the riot because they refused to wear masks and were "rowdy, argumentative and harassed our crew members."

Alaska said it has so far banned a total of 302 passengers for violating its mask policy since it went into effect last August 7.

The airlines don't necessarily share their no-fly lists with each other. Delta's CEO, for example, said last month that about 700 people are on the company's no-fly list. The discrepancy means that unruly passengers could simply book flights on different aircraft.

Meanwhile, union representatives are calling for the FBI to add as many rioters as possible to the federal no-fly list, and are encouraging federal regulators to do more to discourage dangerous or disturbing behavior on flights.

"Airlines and law enforcement agencies have bolstered security at Washington-area airports this week after reports of 'mob behavior' on flights in and out of the region surrounding Wednesday's siege on the US Capitol," according to a January 9 statement from the Association of Flight Attendants. "Every airline flying out of the region over the last several days has experienced incidents onboard. Flight Attendants House Homeland Security Chairman Bennie Thompson (D-Miss.) on Thursday urged TSA and the FBI to add 'violent perpetrators' who participated in the Capitol riots to the federal No-Fly List."

Democrat Rep. Peter DeFazio, chair of the House Transportation Committee, said in a statement Monday that he is urging the FAA and its administrator, Stephen Dickson, "to limit the chance that the Nation's commercial airline system could be used as a means of mass transportation to Washington, DC, for further violence in connection with the inauguration."

The FAA issued a separate statement, announcing "unruly behavior on an airplane may violate federal law" and it can result in jail time and fines of up to $35,000.