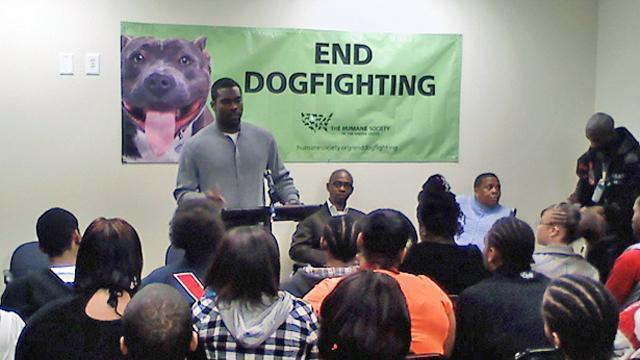 Raleigh, N.C. — The public appearance in Raleigh by NFL quarterback Michael Vick that drew protests and petitions by animal rights groups won't happen after all.

Vick was scheduled to keynote the annual Greater Raleigh Sports Council's Evening of Champions on Wednesday.

On Tuesday, with winter weather in the forecast, the Raleigh Chamber rescheduled the event for Thursday, Feb. 27.

"We had hoped that our special guest interviewee, Philadelphia Eagles quarterback Michael Vick, would be available on the 27th, but we have been advised that he can’t be in Raleigh on that date due to a previously scheduled engagement," the Chamber said in a statement accompanying the schedule change.

Vick served almost two years in federal prison on charges related to a dog-fighting ring run out of a property he owned in Virginia. Since completing his sentence, he has worked with the Humane Society of the United States. In speaking engagements, he has expressed remorse for his role in dog fighting and has become an advocate for the humane treatment of animals.

Vernessa Roberts, a spokeswoman for the Raleigh Chamber, said that organizers recognized Vick might be a controversial choice.

"Our decision to have Michael Vick as our speaker at the Evening of Champions was made knowing that some would disagree, but our steering committee felt that his career story offers our guests an informative perspective about the excesses of fame and money in celebrity culture. His presentation includes how he made very significant mistakes and how he has learned from the consequences of his actions and subsequently changed his life. His conviction and subsequent reinstatement to the NFL were one of the biggest stories in sports. We believe he has an important message to share," Roberts said.

Registrations for the Evening of Champions will transfer to Feb. 27, the Chamber said. Anyone who can't make that date can request a refund via email to hcorn@raleighchamber.org. No refunds will be issued after Feb. 17.