Vice distances itself — again — from co-founder who started Proud Boys 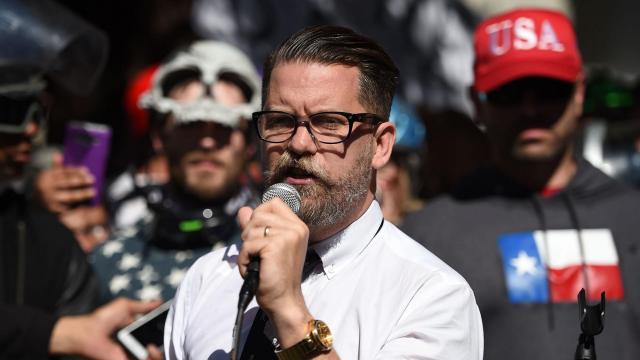 CNN — Vice Media is once again working to distance itself from its co-founder, Gavin McInnes, who set much of the tone for the company in its early days before going on to found the Proud Boys, the far-right group whose ideology ​has been labeled "misogynistic, Islamophobic, transphobic, and anti-immigration" by the Anti-Defamation League.

Wednesday night, one day after President Donald Trump failed to disavow the Proud Boys during a presidential debate, instead telling them to "stand back and stand by," Vice Media CEO ​Nancy Dubuc sent an email to her staff to reassure them that the media company has no current connection with McInnes.

"I'm sure we're all still trying to make some sense of what was said in last night's U.S. Presidential debate, but I wanted to write to you to make one thing clear: Gavin McInnes has no affiliation with VICE," Dubuc said in her email, which was obtained by CNN Business. "While the legacy of his role in founding the company swirls up from time to time - I want you all to be assured that any association he had with the company ended more than a decade ago in 2008. What he did after that - including founding the Proud Boys in 2016 - had nothing to do with VICE, our values or our people."

The email was first reported by The Wrap.

McInnes may not have any affiliation with Vice Media now. But he did co-found the alternative magazine that grew into what Vice Media is today, and he worked at Vice for 14 years.

McInnes, along with Shane Smith and Suroosh Alvi, bought Voice of Montreal, a magazine funded by the Canadian government, in 1994. According to a profile in The Guardian in 2008, the three took control of the magazine after a falling out with the publisher. They changed the name to Vice and later moved to New York City and expanded the magazine internationally.

McInnes, under aliases, wrote much of the content for Vice in its early days before they had a budget for freelancers, according to a New Yorker profile in 2013. He also co-authored several Vice books.

In a profanity-laced Q&A with New York Press in 2002, McInnes said he was glad that hipsters in Williamsburg, the Brooklyn neighborhood where Vice is headquartered, were White. After a letter writing campaign by a Black reader, Vice apologized for McInnes' comment, The New York Times later reported. He was also quoted by the Times saying, "I love being white and I think it's something to be very proud of. I don't want our culture diluted. We need to close the borders now and let everyone assimilate to a Western, white, English-speaking way of life.'' An unnamed ex-staffer told The New Yorker "[t]hat was the beginning of the end" of McInnes' time with Vice.

By the time McInnes left Vice in 2008, the company had invested in creating digital video and gained notoriety for its provocative documentaries. Vice was on its way to becoming a darling of media investors that would, at its likely high-water mark in 2017, be valued at $5.7 billion. McInnes left "because of creative differences with his partners," according to The New York Times.

McInnes founded the Proud Boys in 2016. He quit in 2018, but in 2019 sued the Southern Poverty Law Center for designating the organization a hate group. Officially, the group describes themselves as being organized around the belief that "West Is The Best" — what they call Western Chauvinism — and reject the label of White supremacists and alt-right. They say they oppose both racism and "racial guilt." They advocate for closed borders, gun rights, and "venerating the housewife." In a statement to CNN Business Thursday, McInnes rejected the notion that the Proud Boys are racists or White supremacists.

Current Proud Boys leader Enrique Tarrio told CNN's Elle Reeve, who previously worked at Vice, that he was happy about the President's comment for the Proud Boys to "stand back and stand by."

In Wednesday's staff memo, Dubuc wrote, "I hope that our work, our culture and our leadership speak for itself unequivocally, but let me say - to leave no shred of doubt - we all condemn white supremacy, racism and hate in every form."

"Our award-winning teams have led the charge in holding the Proud Boys and other similar groups accountable through dogged and unflinching investigative journalism. Our teams have produced world-class reporting on the alt-right from Charlottesville to Louisville and most recently Portland," Dubuc wrote. "I thank you for your unwavering commitment to continuing this work - and if anyone gives you a hard time, send them my way. I'm happy to set the record straight."

When CNN Business reached out to McInnes by text message about what Dubuc had written, he replied saying, "I created that brand and defined the content from its inception to when I left in 2008. My pithy irreverence still haunts it like Banquo's ghost."