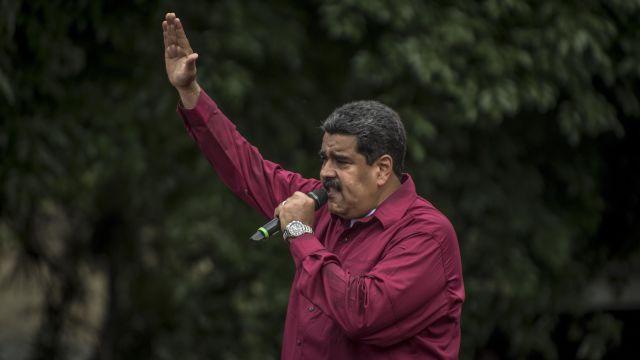 One shows President Nicolás Maduro of Venezuela chased by a hungry mob brandishing pots and pans in 2016. In another, Maduro enters a plaza before Election Day in May to drum up a crowd — but finds the square practically empty. Then there are the images from this past week: As the president’s stage shakes from an explosion on Saturday, hundreds of troops break ranks and flee in panic.

This portrait of vulnerability comes as Venezuela faces the biggest economic crisis in its modern history.

And yet, Maduro has remained in power. Many are now wondering whether he has not only held on despite the disasters, but perhaps, by some measure, because of them.

“There’s an area between democracy and outright dictatorship in which economic crises can actually help the leader consolidate power,” said David Smilde, a sociology professor who studies Venezuela at Tulane University.

Indeed, Maduro has weathered attempted rebellions, months of mass street protests, isolation from neighboring countries, threats of military intervention from President Donald Trump, declining oil revenues, dissent within his own party, a mass exodus of his people and an election in May, widely described as rigged, that extended his term until 2025.

Maduro has gone to great lengths to court those who might topple him, like Venezuela’s military, which observers have long seen as the most powerful group that could turn on him.

As the economy collapsed, leaving the country short of food and medicine and the currency worthless, Maduro has offered the military the lucrative prizes that remain. Military leaders run the food and oil industries and control the region where gold, diamonds and coltan are mined. So far, the arrangement has secured loyalty, analysts say, as generals calculate that it is more profitable to remain aligned with the current government than to return to democracy, where their future is uncertain.

Maduro could still face the threat of street protests like those that raged in Caracas and other cities for months last year, and left more than 100 dead after the president’s bloody crackdowns. Yet these days, the unrest has petered out. The rallies that still occur are less political now, and often have to do with putting pressure on local officials to restore services like water and electricity. A power failure left 80 percent of Caracas, the capital, without electricity for hours last week, and such shortages are becoming common in other cities.

Hebert García Plaza, a former general who fled the country after the Maduro government accused him of corruption, said Venezuela’s security agencies now shut down protests as soon as they were planned, to prevent another outbreak of demonstrations like those in 2017.

“They remove the tumor at its source,” he said, saying spy agencies now make arrests at any sign of “social unrest or attempt to rise up.”

The circumstances are reminiscent of some of Latin America’s strongmen of the 20th century. But there are stark differences: If then, generals stood stone-faced in dark sunglasses as military formations stood at attention, Maduro appears in constant crisis, as was on display Saturday when his national guardsmen fled the attack and he sought cover.

It is this kind of uncertainty that Maduro seems best suited at harnessing to his advantage, many argue. Dimitris Pantoulas, a political analyst and risk consultant in Caracas, expects that the alleged assassination attempt will be used as further pretext to crack down on possible opponents. The government later arrested six people who they said had made an assassination attempt on Maduro.

“I fear any crazy man may try something like this now,” said Pantoulas, giving Maduro further leverage.

While Maduro may not exactly fit the model of a military dictator, he has followed an example left by former Cuban leader Fidel Castro: He relied on the exodus of unhappy citizens as an escape valve.

Castro’s reign was accompanied by two large migrations that followed his takeover of the government. The first wave was of made up of educated upper- and middle-class Cubans who opposed his 1959 revolution, and the second, of poorer Cubans who fled in boats beginning in the 1980s.

Venezuela has seen similar migrations — but they have taken place simultaneously.

Colombia is now home to almost 1 million Venezuelans, mainly poor, who have sought refuge there and in Brazil, with which Venezuela also shares a border. Educated Venezuelans have sought refuge in Europe and the United States, as well as some South American countries, like Peru and Chile, which have recruited professionals.

The upshot is changing demographics where many of Maduro’s opponents are now outside the country, and many of those who remain have decided to put up with him.

“It leaves a population that is content with what’s going on or tend to be more passive,” said Smilde, the sociologist.

However, Smilde warns that holding onto power by taking repeated advantage of a crisis is not sustainable in the long-term. He points to the example of the military, whose ranks have received pay increases that have well outpaced wage increases for other workers. Their raises have not, however, outpaced inflation: A typical general, Smilde estimates, earns about 250 million bolívars per month, the equivalent of $70. Other patronage measures employed by the Maduro government — such as allowing cronies to strip state companies of assets — have been the subject of investigations by U.S. prosecutors.

And few economists expect that Maduro’s latest proposals — which include removing five zeros from the currency and allowing for foreign trade transactions — will right Venezuela’s economy, whose major ailment remains deep declines in oil production which Maduro has yet to resolve.

But for now, the president seems content that his formula is working. Though a protégé of the populist Hugo Chávez, Maduro now sometimes flirts with comparisons to leaders who turned to brute force to govern.

“There are people in the world who see me as the Stalin of the Caribbean,” he said in a broadcast late last year. “And I look like him. Look at me in profile. Sometimes when I look in the mirror, I see Stalin.”