The famous Raleigh steakhouse is the reigning winner for best steak and best fine dining restaurant. The restaurant won the same two awards in 2018 as well.

The restaurant celebrated its 60th birthday in late June, so we decided to give you five fast facts about this Raleigh institution.

Steak and potatoes were part of the plan from the beginning - Restaurateurs Thad Eure, Jr and Charles Winston bought 50 acres of pastureland on a desolate section of Highway 70, halfway between Raleigh and Durham in 1959. They borrowed money from every person they could to fund the project, since they were unable to get funding from any bank. They decided in the beginning that it would be a steak and potato-based menu.

It's still family owned and operated - The Angus Barn opened June 28 1960. In 1978, Eure bought out Charles Winston who went on to pursue other endeavors. Eure died in 1988, leaving his wife, Alice, and daughter, Van as co-owners of The Angus Barn. Van now runs the restaurant with her husband, Steve Thanhauser.

It has served an estimated 14 million guests - The restaurant is known as a "Beef Eaters Haven" and serves more than 22,000 steaks per month. 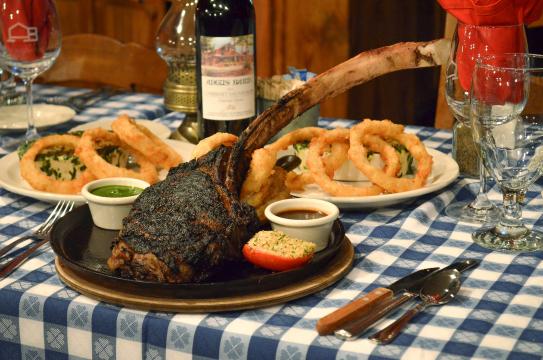 The wine is award-winning too - In 1989, Wine Spectator honored The Angus Barn with its Grand Award for its wine selection. The restaurant's wine cellar has earned that honor for more than 30 consecutive years.