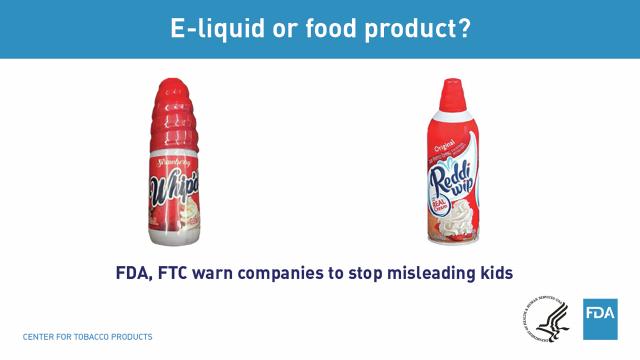 Federal authorities said Tuesday they were issuing 13 warning letters to companies that sell vaping products like liquid nicotine in packaging that may appeal to children, including products that resemble juice boxes and candy.

The joint action by the Food and Drug Administration and the Federal Trade Commission is the latest step by the federal government to crack down on the vaping industry, particularly on devices that are popular with teenagers.

Last week, FDA officials said they had started an undercover sting operation targeting retailers that sell the popular Juul products to minors and had asked the maker, Juul Labs, to turn over documents related to marketing practices and health research.

The action Tuesday, against a group of manufacturers, distributors and retailers, focused on products that the agencies said were aimed at underage users or could be accidentally ingested by children. The products, sold through multiple online retailers, have names like One Mad Hit Juice Box, sold by NEwhere Inc., and Vape Heads Sour Smurf Sauce, sold by Lifted Liquids, which look like Warheads candy.

Some of the companies also sold products to minors. Federal officials said even if the products were not sold to minors, a child could be mistakenly poisoned because the packaging so closely resembled food and candy.

“The images are alarming and it’s easy to see how a child could confuse these e-liquid products for something they believe they’ve consumed before,” Dr. Scott Gottlieb, the FDA commissioner, said in a telephone call with reporters Tuesday.

Child poisonings from ingesting liquid nicotine have recently increased. Such poisonings can be deadly and can cause seizures, comas and respiratory arrest. There is no evidence the products under scrutiny this week caused any child deaths, officials said.

Nevertheless, “it takes a very small amount of these e-liquids, in some cases less than half a teaspoon, to be at the low end of what could be a fatal effect for a kid, and even less than that to make them very, very sick,” said Mitch Zeller, director of the FDA’s Center for Tobacco Products.

Some of the products even smelled like the food they were imitating, said Maureen K. Ohlhausen, acting chairwoman of the FTC. The apple juice product came in a cardboard box, with the corners sealed and folded over just like the shelf-stable boxes sold in supermarkets, according to the warning letter. It also smelled like apple juice, even without opening the package.

“These companies are marketing their e-liquids in a manner that the product particularly appealing to young children,” she said.

Nick Warrender, owner of Lifted Liquids, said he removed the Vape Heads product from his inventory and redesigned the packaging about six months ago to address officials’ concerns over marketing such products. “It was something we already saw as a problem,” he said.

He said that the products were never marketed to children, but were designed to appeal to adults’ nostalgia. “Our goal is complete compliance with the FDA and the FTC,” he said, but added that he also wanted to create products that will be attractive to consumers.

“Our goal is also to provide products that are going to give adult smokers the ability to get away from cigarettes and also something they are going to enjoy.”

Warrender said his products are sold in childproof packaging and that any online sales go through a rigorous vetting system.

Jameson Rodgers, vice president of business development at NEwhere, said the company stopped manufacturing and shipping the apple juice product months ago, after deciding in early 2017 that it was “a way to be proactively responsible.” Rodgers said that it was possible some retailers were continuing to sell remaining inventory of the product even though his company had stopped making or shipping it.

Other companies could not be reached immediately for comment. FDA officials said all of the companies sent warning letters Tuesday had recently sold the products. Last summer, Gottlieb issued a reprieve to manufacturers of electronic cigarettes by delaying regulations that could have removed many of their products from the market, while at the same time announcing an initiative that will push tobacco cigarette-makers to reduce the levels of nicotine in their products.

Gottlieb said the action Tuesday, as well as the crackdown last week on the Juul products, were part of a longer-term campaign aimed at reducing the use of vaping products by minors.

While he said there is value in encouraging the development of alternatives that could lure smokers away from harmful cigarettes, public health officials needed to be vigilant about not addicting a new generation of young people to vaping products.

“These are just the initial steps in what is going to be a sustained campaign,” Gottlieb said. “There are bad actors out there.”