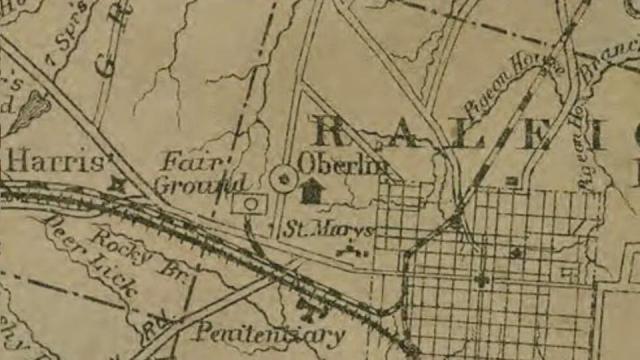 Raleigh, N.C. — If you've lived in Raleigh long enough, you've heard the city divided up by its geographical locations – North Raleigh, Midtown, Downtown, the Warehouse District and South Raleigh, among others.

You may, however, be surprised to learn that some major Raleigh neighborhoods have been almost completely erased from history.

In the years after the Civil War, men and women freed from nearby plantations formed 13 freedman's villages around Raleigh. The city was flooded with over 4,000 'freedmen,' who were starting out life in freedom with no jobs, no homes and no money.

These citizens made up around half of the city's entire population, pulling together to build homes, churches, schools and businesses.

However, of the 13 villages formed during this time, only Oberlin Village and Method remain today.

What happened to the 11 other Freedman's Villages? How were their names forgotten?

Many of those answers rest in South Raleigh. 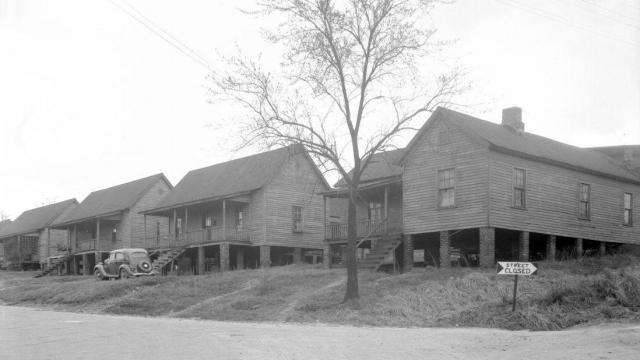 Oberlin and Masonville, which later became Method, were two of the earliest freedman's villages in Raleigh.

The Method community still stands in southwest Raleigh. Established in the 1870s by half-brothers Jesse Mason and Isaac O'Kelly, it consisted of nearly 70 acres of land bought from a Confederate General named William Ruffin Cox.

The brothers sold parcels to other men and women who had been freed from nearby plantations.

The area was sometimes called Planktown, Slab Town, and Save-Rent -- a reference to the simple log homes built with 'planks' or 'slabs,' according to the Raleigh Historic website. Hand-built by the citizens themselves, none of these original homes survived.

Method was eventually annexed by Raleigh. 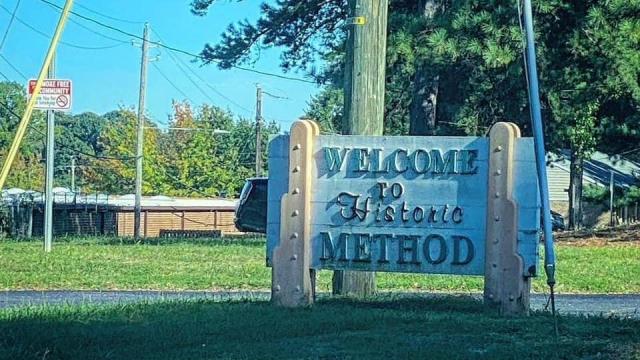 Oberlin Village was the largest of the freedman's villages. Originally called 'Peck's Place,' it began when a man named Lewis Peck began selling plots of land to people freed from nearby plantations.

With several large and beautiful homes, historic churches and its own university, Oberlin Village was the home for prominent Black citizens in Raleigh. Among them were:

Oberlin was also annexed by Raleigh and allowed to maintain its cultural history and historic buildings. However, until the past few years, the origins of Oberlin Village had also slipped from the public consciousness – until the work of Friends of Oberlin Village helped preserve historic structures and brought the community's history back to the forefront. 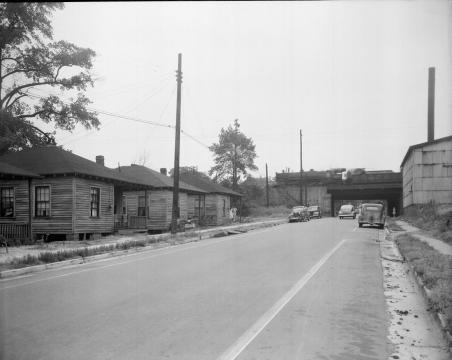 Freedman villages that faded from history

Sadly, history has all-but-forgotten the other 11 freedman's villages. Many historians don't even know the villages' names, let alone where they were located or what happened to them.

Carmen Cauthen, the founder of Research and Resource, has researched the history of Black housing in Raleigh.

"There was Masonville, which later became Method, and Oberlin, of course. And there was Lincolnville and Brooklyn," she said. These four were the first Freedman's Villages, created even before the Reconstruction began.

During the Reconstruction after the war, nine other villages popped up, creating 13 in total:

"After the Civil War, freedmen settled in the areas east of East Street and south of South Street. Because of their poverty, they were only able to purchase the less expensive land usually in the creek bottoms or other less desirable locations," said Cauthen.

According to Cauthen, those segregated trends have continued, impacting south Raleigh from the 1860s all the way up into the 2020s. 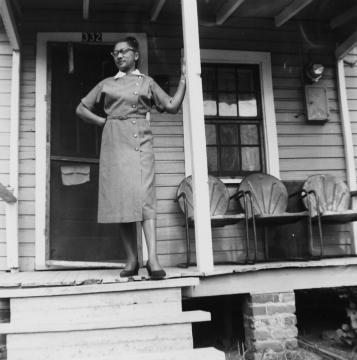 Modern day clues to where the lost villages stood

There are modern day clues to where these neighborhoods once stood -- if you know where to search.

Today, a street named Idlewild still runs through the area. Likewise, a little subdivision named Hungry Neck North marks the location where the freedman's village once stood. Nearby, a short road named Cotton Place and another road named Freeman Street serve as reminders of this important history. 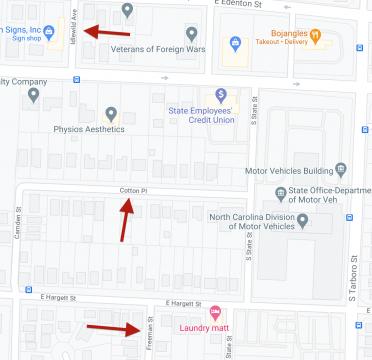 The location of the Old Fairground village is pretty easy to surmise, as it was built on the original site of the first NC State Fair. Today, that site is marked by an oft-overlooked inscription on the pavement near the DMV on New Bern Avenue. Once the State Fair moved to its second location–which is where the Raleigh Rose Garden stands today–the old site likely opened up and made a perfect spot to build a growing community.

"Lincolnville was out down Chapel Hill Road, right before you get to the turn off for I-40," said Cauthen. "The Lincolnville AME Church is still part of that area."

Old Manly Street in he Walnut Terrace area across from Washington Elementary School is likely a reference to the village that once stood there. According to Cauthen, when she was growing up she could still see the remnants of an old road behind a fence at the end of the street.

"Cannon Land was west of the railroad tracks," she said. "It was part of the Robert Cannon plantation."

Brooklyn appears to have been near the location of Devereux Street, where the Devereux Plantation would have once stood.

These locations make even more sense, considering that Hargett Street became a booming business area for the Black community, taking on the nickname 'Black Main Street.' 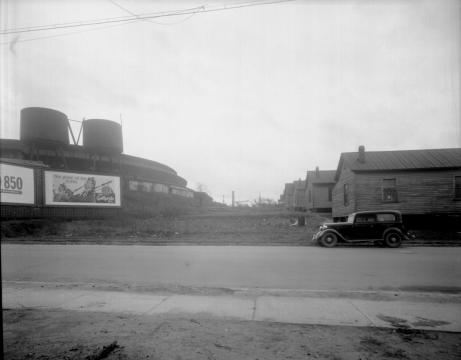 How did these neighborhoods vanish?

Cauthen's research has shown that many wealthier families bought homes in neighborhoods with higher elevations. Meanwhile, freedman's villages were often in impoverished locations where flooding was a concern. In those days, many wealthy neighborhoods had clauses that Black families were not allowed to purchase homes, which left the Black community restricted to more impoverished areas in less desirable parts of the city.

One Black community, called Biltmore Hills, didn't even realize they lived in a 500 year flood plain until Hurricane Fran in 1996 sent raging waters into their community.

Money was another factor. As neighborhoods in wealthier areas were marked historic and preserved, lower-income homes were more likely to be developed over as property values grew – a concern that continues today, especially in south Raleigh. 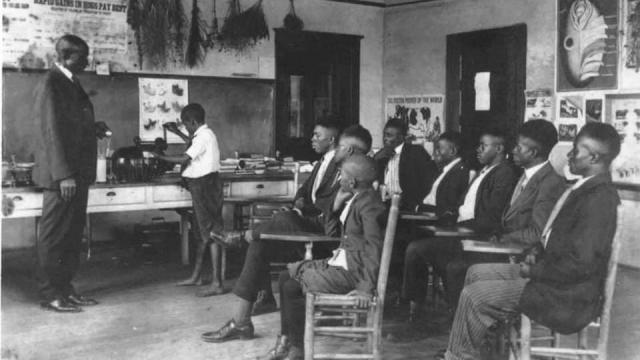 As south Raleigh continues to grow and develop, there is a risk of losing some of these lesser-known, but very important pieces of history.

Friends of Oberlin have been striving to protect Oberlin's historic homes and properties – after losing major historic structures like Latta University and the Latta House. Method's Berry O'Kelly School has been preserved. While it no longer serves as a school, it was protected by being converted into a park.

Hidden History: Remnants of the wall with cannons that surrounded Raleigh 150 years ago

However, remnants of historic homes and structures from other freedman's villages and historically Black neighborhoods can't be protected if no one knows they exist.

Al Bredenberg, a historian researching the wall with cannons that once surrounded Raleigh during the Civil War, pointed out remnants of the wall at risk for being developed over – which could have buried relics from enslaved men who built the wall.

Many locals aren't aware of how much history south Raleigh holds. But citizens like Cauthen who know how much history is hidden in those streets hope to see those historic memories and structures highlighted – and maybe even preserved.

WRAL's Hidden Historian takes us to the remains of the Berry O'Kelly school in Historic Method in a live stream.