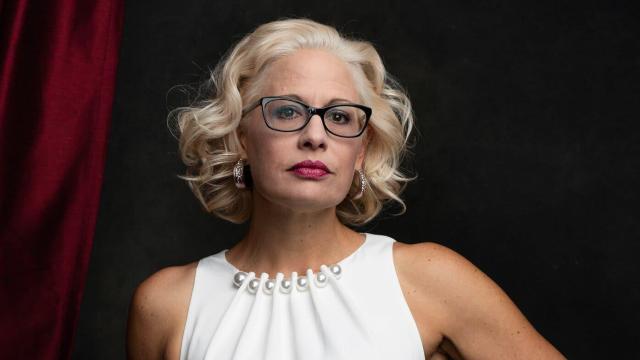 EDITOR'S NOTE: Vanessa Friedman is The New York Times's fashion director and chief fashion critic. She was previously the fashion editor of the Financial Times.

Sen. Kyrsten Sinema may have been in Europe recently on a fundraising trip and out of reach of the activists who have dogged her footsteps, frustrated with her obstruction of President Joe Biden’s social spending bill. But despite the fact that her office has been keeping her itinerary under wraps, were those protesters able to follow her overseas, there’s a good chance they would be able to find her.

Not just because of her political theater. Ever since she was first sworn in to the Arizona House of Representatives in 2005, Sinema has stood out in a crowd. And as her legislative demands take center stage (along with those of Sen. Joe Manchin, D-W.Va., the other Biden Bill holdout) her history of idiosyncratic outfits has taken on a new cast.

As Tammy Haddad, former MSNBC political director and co-founder of the White House Correspondents Weekend Insider, said of the senator, “If the other members of Congress had paid any attention to her clothing at all, they would have known she wasn’t going to just follow the party line.”

The senior senator from Arizona — the first woman to represent Arizona in the Senate, the first Democrat elected to that body from that state since 1995 and the first openly bisexual senator — has never hidden her identity as a maverick. In fact, she’s advertised it. Pretty much every day.

Indeed, it was back in 2013, when she was first sworn in to the House, that Elle crowned Sinema “America’s Most Colorful Congresswoman.” Since she joined the Senate, she has merely been further embracing that term. Often literally.

Notice was served at her swearing-in Jan. 3, 2019, when Sinema seemed to be channeling Marilyn Monroe in platinum blond curls, a white sleeveless pearl-trimmed top, rose-print pencil skirt and stiletto heels: She was never going to revert to pantsuit-wearing banality.

Instead, she swept in as a white-cape-dressed crusader for Donald Trump’s first impeachment trial, in January 2020. She modeled a variety of Easter egg-colored wigs — lavender, pink, green — to demonstrate, her spokeswoman Hannah Hurley told The Arizona Republic in May of last year, a commitment to “social distancing in accordance with best practices, including from salons.” (Hurley specified that the wig cost $12.99.) Sported pompom earrings, a variety of animal prints, neoprene and assorted thigh-high boots. And presided over the Senate on Feb. 23 of this year while wearing a hot pink sweater with the words “Dangerous Creature” on the front, prompting Mitt Romney to tell her she was “breaking the internet.” 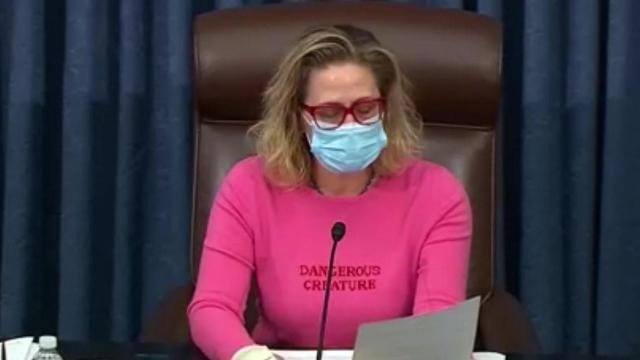 To dismiss that as a stunt rather than a foreshadowing is to give Sinema less credit than she is due.

“She’s saying, ‘I can wear what I want and say what I think is important, and I’m going to have a lot of impact doing it,’” Haddad said. “She is unencumbered by the norms of the institution.”

Lauren A. Rothman, an image and style accountability coach in Washington who has been working with members of Congress for 20 years, said it’s part of a growing realization among politicians that “you are communicating at all times, because a clip on social media can be even more meaningful than something on national TV.” And that means “thinking at all times about what story you are telling with your nonverbal tools, which means your style.”

As Washington has begun to realize. Conversation with various insiders and Congressologists offered theories on the wardrobe that suggested it was either sleight of hand, meant to distract from Sinema’s journey from progressive to moderate to possibly Republican-leaning; or meant to offer reassurance to her former progressive supporters that she wasn’t actually part of the conservative establishment. 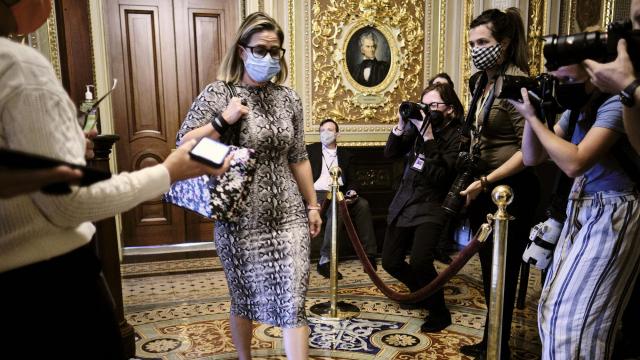 Richard Ford, a professor at Stanford Law School and the author of “Dress Codes: How the Laws of Fashion Made History,” said he thought her image was designed to telegraph: “I’m a freethinker, my own person, not going along with convention, so even though I’m a part of the Democratic Party I am representing your interests, not theirs.” (As it happens, Sinema is featured in the book as an example of a woman “unapologetically” bringing a more feminine approach to dress to “the halls of power.”)

Whatever the interpretation, no one expressed any doubt that she knew exactly what she was doing. To pay attention is simply to acknowledge what Haddad called “a branding exercise” being done “at the highest level.” Either way, the senator’s office did not respond to emails on the subject.

After all, said Hilary Rosen, vice chair of political consultancy SKDKickerbocker, who has known Sinema since 2011, the senator “used to dress more like the rest of us, in simple dresses” and the occasional suit jacket. But, Rosen said, “I’ve seen a real shift in the last few years, and I think they way she dresses now is a sign of her increasing confidence as a legislator. She’s not afraid to wear her personality on her sleeve, and that’s rare in a politician. They usually dress for ambiguity.” There are few places, after all, more hidebound when it comes to personal style than Congress, which long had a dress code that included the caveat that congresswomen were not supposed to show their shoulders or arms in the building. The House changed its rules in 2017, but the Senate hewed to tradition until Sinema’s election; the rules were actually changed for her.

According to Jennifer Steinhauer’s book “The Firsts: the Inside Story of the Women Reshaping Congress,” Sen. Amy Klobuchar, senior member on the Senate Rules Committee, went to leadership before the last swearing-in to request that the rules be reconsidered to reflect the modern world. She knew that Sinema, a triathlete, had a penchant for showing her arms and believed the new senator “needed to be allowed to wear what she wanted” in her new workplace. Some male senators grumbled but acceded. (In the end, Sinema compromised by carrying a silver faux-fur stole to cover her shoulders.) 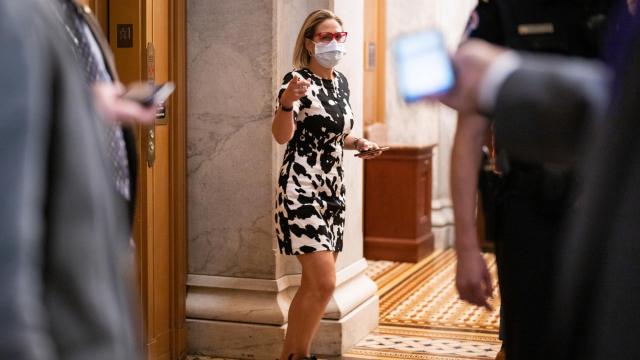 But for women, Capitol Hill is traditionally a land of Talbots and St. John’s; of dressing to camouflage yourself in the group so it is your words that stand out, not your clothes. As Ford said, “Women are always subject to heightened scrutiny and criticism,” and in Washington this is even more true.

There’s a reason Kamala Harris, the first female vice president, seems to wear only dark pantsuits. A reason the Women’s Campaign School at Yale Law, an annual five-day intensive training course for female elected officials hosted by the school (though not administered by it), includes a seminar titled “Dress to Win.” Any woman in the political public eye has to make a decision about her clothes, whether she likes it or not, and resorting to the most nondescript common denominator is the norm.

When statements have been made with dress, they have been made with clear intent, both individually — the flamethrower coat Nancy Pelosi wore when she faced down President Trump over his border wall; her many face masks; her mace pin — and with critical mass, as when the women of the House wore white to Trump’s State of the Union in 2019 and 2020. However, such visual messaging remains the exception to the general rule (that’s part of what makes these moments stand out and gives them their power).

When fashion comes into play, it is more generally as a gesture of international diplomacy (where it is often left to the first lady to get fancy in the name of playing nice on a state visit) or national boosterism, using the political spotlight to promote local business and thus justify the choice of a designer name as a move to help the economy (see Biden’s decision to wear Ralph Lauren to his swearing-in).

Sinema began her Washington career by breaking that tradition, clearly reveling in a seemingly endless wardrobe of eye-catching, idiosyncratic and colorful clothes speckled with flowers and zebra stripes: the kind more often labeled “fun” rather than, say, “sober” or “serious”; the kind that were unidentifiable in terms of provenance (where did she get them? where were they made? who knew?); the kind that are not unusual in civilian life but stand out like neon lights under the rotunda of the Capitol; the kind that maybe call to mind an uninhibited co-worker with a zest for retail therapy at the mall. But that the senator continued to do so as she ascended the political ranks served two purposes.

It made her nationally recognizable in a way that very few new members of Congress are, and it placed her at the forefront of a social trend at a time when dress codes of all kinds are being reconsidered — and often left behind. (It’s no accident that the other congresswoman sworn in at the same time who has become a household name, Alexandria Ocasio-Cortez, is equally good at using the tools of image-making to craft her political message.)

And it made it clear she just wasn’t going to apologize for enjoying shopping. She clearly does a lot of it. So what? As far as she is concerned, she can have her stuff and substance too.

In other words, all those seemingly kooky clothes that Sinema is wearing aren’t kooky at all. They’re signposts. And the direction they are pointing is entirely her way.