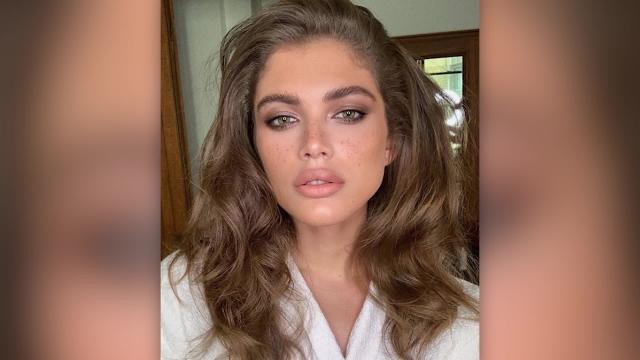 Valentina Sampaio made history Friday, becoming the first transgender woman to be featured in the Sports Illustrated swimsuit issue, the magazine said.

In a personal essay on the magazine’s website, Sampaio, a 23-year-old Brazilian model, said she was honored to be in the publication.

“The team at SI has created yet another groundbreaking issue by bringing together a diverse set of multitalented, beautiful women in a creative and dignified way,” she wrote.

While Sampaio’s inclusion in this year’s swimsuit edition has earned headlines, it’s hardly a first for her: Last year, she became Victoria Secret’s first openly transgender model and was hired for catalog work for VS Pink, the company’s athletic line. In 2017, Sampaio was also the first transgender model to grace the cover of a Vogue edition.

In recent years, the Sports Illustrated swimsuit issue has had a number of breakthrough moments.

The magazine, which debuted in 1964, put Ashley Graham, its first size 16 model, on the cover in 2016. Last year, it featured the Somali-American model Halima Aden, who was the first woman to wear a hijab and burkini in the magazine.

MJ Day, the editor of Sports Illustrated Swimsuit, said in a statement that Sampaio had been on her radar for some time and that she had noticed her passion for activism, calling the Sports Illustrated rookie a “true pioneer for the LGBT+ community.”

Sampaio said that she was born in a fishing village in northern Brazil, and that being a transgender woman meant facing doors closed to “hearts and minds” as well as encountering insults and violence “just for existing.”

“Our options for growing up in a loving and accepting family, having a fruitful experience at school or finding dignified work,” Sampaio said, “are unimaginably limited and challenging.”

Her inclusion in this year’s swimsuit issue comes amid a wide push for transgender visibility, acceptance and rights. In the United States, lawmakers in more than two dozen states have introduced measures that would take away transgender rights, including criminalizing medical professionals who prescribe hormone treatments to minors.

Transgender women have long been a target of violence, and Black transgender women, in particular, are killed so often, the American Medical Association has declared it an epidemic.

In 2019, 91% of the transgender or gender-nonconforming people who were fatally shot were Black women, according to the Human Rights Campaign. So far this year, there have been at least 16 murders of transgender people.

“I recognize that I am one of the fortunate ones, and my intention is to honor that as best I can,” Sampaio said. “What unites us as humans is that we all share the common desire to be accepted and loved for who we are.”