Valadao Concedes House Race in Another Setback for California Republicans 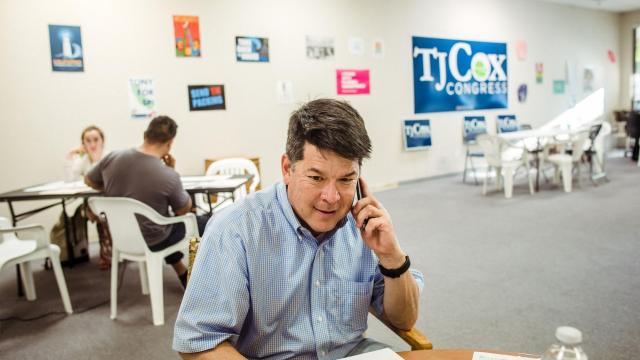 LOS ANGELES — It seemed that things could hardly get much worse for California Republicans.

But on Thursday, the party conceded a seventh congressional seat in California, as Democrats completed a clean sweep of all the Republican-held seats in California districts where Hillary Clinton had defeated President Donald Trump. Democrats are now likely to take 40 seats from Republicans as they decisively capture control of Congress.

David Valadao, a Republican who has represented Central California since 2013 — and won re-election in 2016 with a sturdy 57 percent of the vote — was defeated by T.J. Cox, an engineer making a second bid for Congress. “Representing the Central Valley in Congress has been the honor of a lifetime,” Valadao said in his concession statement.

Valadao’s loss was a particularly dispiriting turn of events for Republicans because he had initially been declared the winner of the race by The Associated Press. And from the start, he seemed the best situated of the seven Republicans to withstand challenges by Democrats, given his previous strong winning margins.

For weeks, Republicans seized on his survival as a rare glimmer of good news from Election Day. But as election officials counted mail-in votes over the following weeks, Cox narrowed Valadao’s lead. The AP withdrew its call when results showed Cox pulling ahead.

The latest Republican defeat underlines the political burden Trump has proved to be for his party’s candidates in California. It also is a rebuke for Rep. Kevin McCarthy, R-Calif., the majority leader in the House, who pushed members of his delegation to support legislation that Democrats used against them, including a campaign to overturn President Barack Obama’s health law and a Republican tax cut that sharply curtailed deductions for state and local taxes, which were valued by many California homeowners.

Republicans will now control seven of the 53 seats in the California congressional delegation. Before the election, they held 14 seats.

Clinton defeated Trump by nearly 4 million votes in California in 2016, and beat him in Orange County, a result that many Democrats and Republicans saw as a particularly strong warning. Still, Jim Brulte, the state Republican Party chairman, disputed the notion that Trump was alone responsible for the party’s problems in California, noting that Republicans have been steadily losing ground there.

In addition to this loss in the Central Valley, Democrats swept all four Republican-held seats in Orange County, once a symbol of the conservative Republican movement. They also won a seat in northern Los Angeles and another in Central California.

Some of the best-known names in California Republican politics will not be returning to Washington after this election, either because they were defeated or resigned in anticipation of a probable loss. Among them are Rep. Dana Rohrabacher, who lost to Harley Rouda, a Republican who became a Democrat; and Rep. Darrell Issa, who retired and is being replaced by Mike Levin, a Democratic lawyer.