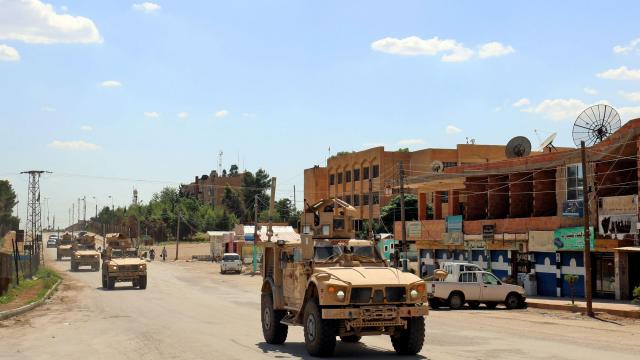 (CNN) — The United States will pull out of Syria only with assurances Turkey will not attack Kurdish allies there, national security adviser John Bolton told journalists on Sunday, according to reports.

The added condition to the US' withdrawal of troops from Syria contradicts President Donald Trump's announcement via Twitter last month that US troops would withdraw from the country "now" as he declared that ISIS had been defeated.

"So our boys, our young women, our men, they're all coming back and they're coming back now. We won, and that's the way we want it," Trump said in a video posted to Twitter.

Since his initial announcement, Trump has extended his original 30 day time line to withdraw the troops to four months and on Sunday he told reporters, "I never said we're doing it quickly, but we're decimating ISIS."

On Monday Trump tweeted, "The Failing New York Times has knowingly written a very inaccurate story on my intentions on Syria. No different from my original statements, we will be leaving at a proper pace while at the same time continuing to fight ISIS and doing all else that is prudent and necessary!"

Bolton made the remarks in Jerusalem on a four-day trip to Israel and Turkey. The White House announced last month that ISIS had been defeated in Syria and the United States would withdraw 2,000 troops from the war-stricken nation.

Syria: Who is fighting whom?

"We don't think the Turks ought to undertake military action that's not fully coordinated with and agreed to by the United States at a minimum so they don't endanger our troops -- but also so that they meet the President's requirement that the Syrian opposition forces that have fought with us are not endangered," Bolton told reporters, Reuters reported.

He described the pullout as a "cause-and-effect mission," according to The Wall Street Journal, demanding assurances from players in the region, and said the timetable hinges on certain policy decisions being put into effect.

Bolton also said Trump "wants the ISIS caliphate destroyed," a reference to Islamic State militants in Syria who have been the focus of US assaults, according to Reuters.

Later Sunday, in a news conference with Israeli Prime Minister Benjamin Netanyahu, Bolton again alluded to the welfare of US-backed Kurds. In addition to ensuring that ISIS is defeated and cannot "revive itself," the United States is discussing the defense of Israel and other allies in the region, including "those who fought with us against ISIS and other terror groups," he said.

Turkey says its aim is to 'rescue Kurds'

The Kurds enjoy strongholds in northeastern Syria and southern Turkey and have been integral to US ground-fighting efforts in Syria. Turkey has been engaged in a 40-year conflict with the Kurds and, at times, has been accused of brutal tactics.

Turkey considers many Kurdish separatist groups -- including the People's Protection Units, aka the YPG, which leads the US-backed Syrian Democratic Forces -- to be terrorist organizations. Ankara bristles at US support for the YPG, which it has accused of ethnic cleansing and attacks on its soldiers.

Ibrahim Kalın, a spokesman for Turkish President Recep Tayyip Erdogan, said after Bolton's remarks that any allegation that Turkey is targeting Kurds is "irrational." Turkey's only focus, he said, is ISIS and Kurdish terror organizations, including the YPG, according to the state-run Anadolu news agency.

He accused the YPG and other groups of "making efforts to establish an order by oppressing Kurds, who don't obey them, and their terrorist activities against our country," Anadolu reported.

"There is no doubt that a terror group cannot be an ally of the US," Kalin said, according to the news agency. "It's disrespectful to our Kurdish brothers to claim they are represented by a terror group."

Turkey's aim is to rid Syria of terrorist groups and "rescue Kurds from the tyranny and oppression of this terror group and to ensure their safety of life and property," he said. Turkey resolves to be "both on the ground and at the table" to pursue it national interests, Anadolu quoted Kalin as saying.

Bolton said Sunday that Trump has told Erdogan that the troop withdrawal is contingent on Turkey assuring the United States it will protect the Kurdish fighters who have served as US allies, The Wall Street Journal reported. Bolton is expected to travel to Ankara on Monday.

Previously, a US defense official told CNN that the United States expected Turkey to make various requests for support -- including for airstrikes in Syria -- but the United States would first seek assurances from Ankara that it will not attack US-backed Kurdish fighters in northern Syria.

Bolton's remarks and Turkey's response mark the latest chapter in the White House's decision to withdraw its troops from Syria -- a move that culminated in the resignations of Defense Secretary James Mattis and Brett McGurk, the top presidential envoy in the fight against ISIS.

A week and a half after Trump announced the decision, the YPG issued a statement urging Syrian President Bashar al-Assad's forces to "assert control over the areas our forces have withdrawn from, in particular Manbij, and to protect these areas against a Turkish invasion."

The militia's attempt to engage with the Syria regime after years of fighting indicated a shift in strategic priorities, experts said.

World leaders and American lawmakers, including some of Trump's fellow Republicans, decried the decision to pull out and warned of a power vacuum forming in the absence of US troops. Sen. Lindsey Graham, R-South Carolina, called it a "disaster in the making" and said transferring security to Russian and Turkish forces could endanger the Kurds, as well as prospects for future alliances.

"If we leave now, the Kurds will get in a fight with Turkey. They could get slaughtered. Who would help you in the future?" he asked.

The "big winners" of the withdrawal, he said, would be Russia, Iran, ISIS and the Assad regime. Turkey and "eventually Israel" would lose, Graham said.

French President Emmanuel Macron addressed claims that the pullout was tantamount to deserting the Kurds.

"Being allies means fighting shoulder to shoulder, and so an ally must be reliable and coordinate with other allies," he said.

Days after blasting the planned withdrawal, Graham changed his tune after a lunch with Trump, saying he felt the United States was "slowing things down in a smart way" after military commanders informed Trump that the Islamic State had not been vanquished -- an assertion he called an "eye-opening" revelation for the commander in chief.

"I think we're in a pause situation where we are re-evaluating what's the best way to achieve the President's objective of having people pay more and do more," the senator said.

Bolton, along with the US State and Defense departments, said the United States is working with its partners to ensure a safe troop withdrawal and handoff of security obligations.

The State Department said Israel will continue to receive US support in its fight against "Iranian regional actors." Not only is Iran a powerful backer of the Assad regime, but experts say the Islamic Republic also stands to benefit from any power vacuum in Syria.

Bolton reassured Netanyahu on Sunday that protecting Israel from Iran remains a US priority.

Netanyahu thanked Bolton for the US support -- namely walking away from the Iran nuclear deal, reimposing sanctions and recognizing Jerusalem as Israel's capital.

Weather permitting, Netanyahu said, he planned to take Bolton to the Golan Heights, which Israel captured from Syria in the 1967 war and which the international community considers occupied territory. The purpose of the trip is to show the importance of the area to Israel's security and to demonstrate why it's important the world regards it as Israeli territory, he said.

"It's important to know that we have the backing of our great friend and ally, the United States of America," he said.

Though Trump ordered a rapid withdrawal of troops from Syria on December 19, no timetable was provided. The New York Times has reported that Trump gave military leaders four months to extract personnel.

Despite the announcement, the war against ISIS in Syria has continued, with US-backed forces recapturing ISIS-held towns and the US-led coalition conducting 469 air and artillery strikes on ISIS targets between December 16 and December 29, the coalition said.

"As long as there are US troops on the ground we will conduct air and artillery strikes in support of our forces," a Pentagon spokesman has told CNN.