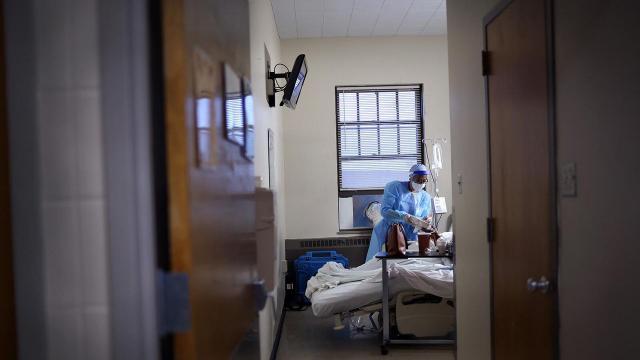 CNN — The number of Americans in the hospital with Covid-19 was at a record high for the 12th day in a row Thursday as the US Food and Drug Administration said it plans to issue emergency use authorization for a second coronavirus vaccine for the country.

More than 114,200 people were hospitalized with the disease, according to the Covid Tracking Project.

The United States, which started distributing and using its first authorized vaccine this week, is also dealing with record rates of new daily cases and daily deaths.

The FDA was widely expected to grant emergency use authorization for Moderna's vaccine candidate -- as it did for Pfizer's vaccine last week -- after its vaccine advisory panel voted to recommend it.

"The agency has also notified the U.S. Centers for Disease Control and Prevention and Operation Warp Speed, so they can execute their plans for timely vaccine distribution," FDA Commissioner Dr. Stephen Hahn and Dr. Peter Marks, director of the FDA's Center for Biologics Evaluation and Research, said in a statement about their plans to grant EUA to Moderna for the vaccine.

The CDC would need to greenlight the vaccine before shots can be administered -- and a CDC advisory panel is expected to meet on the matter Saturday, raising the possibility that the Moderna vaccine could be used next week.

The recently authorized Pfizer vaccine, meanwhile, has been administered to hundreds of US health care workers this week, and drug store chains CVS and Walgreens are helping to get shots to long-term care residents and staff members.

The Pfizer vaccine requires each patient to receive two doses about 21 days apart, and the Moderna vaccine also would require two doses. Assuming the Moderna vaccine is authorized, the two products could combine for an availability of 40 million doses, for 20 million people, by the end of December, Dr. Anthony Fauci, director of the National Institute of Allergy and Infectious Diseases, has said.

But as vaccinations begin, recorded cases, hospitalizations and deaths are rising to levels not previously seen, as hospital staff around the country warn they're running out of space and energy to provide sufficient care:

• Average cases: The country's average number of daily cases across a week was 215,729 on Wednesday -- a record high, Johns Hopkins University data show. That's more than three times what the daily case average was during a summer peak in July.

The White House coronavirus task force warned this week that although spread has slowed somewhat in the northern and central US, cases are still surging in more populated states.

And it lamented that state and local governments are "not implementing the same mitigation policies that stemmed the tide of the summer surge," citing indoor gatherings at home and calling for a "significant reduction in capacity or closure in public and private indoor spaces, including restaurants and bars."

"We're just simply saying, 'Well, we're getting vaccine.' But the vaccine is coming way too late for thousands of people who will die before we get the vaccine distributed widely," del Rio told CNN's "New Day" on Thursday.

"Transmissions (of the virus) are actively happening, and I think before the end of the year, we may be getting close to 4,000 deaths a day," del Rio said.

National Institutes of Health Director Dr. Francis Collins is pleading with Americans to take the pandemic seriously and act to protect themselves and others.

If people stopped arguing about "politics and invasions of freedom and everything else" and just wore a mask and avoided indoor gatherings, "we could have a chance to drag this around in the course of the next few months while we're waiting for the vaccine," he said in an interview with CNN's Wolf Blitzer on Thursday.

"We have another couple of dark months ahead of us," Collins said, "if we don't do something at this point to try to stop this dreadful upward curve of hospitalizations and cases and deaths."

The country's official case count stood at 17,192,376 on Thursday evening, according to JHU, only five days after the count surpassed 16 million and just hours after passing the 17 million mark. But researchers have said the actual number of US infections -- counting those that weren't tested for -- probably is many millions higher.

At least 310,424 people have died in the United States from coronavirus.

Health experts have said Americans have important choices to make: The upcoming holidays could help drive another surge of cases, hospitalizations and, inevitably, deaths, if people opt to travel and gather again.

Despite a warning from the CDC before Thanksgiving urging against travel, more than 4 million spent the holiday away from home.

In California, Los Angeles County has frequently broken records for new daily cases, hospitalizations and daily deaths in recent weeks. On Thursday, about 65% of the county's hospitals were on "diversion," meaning they could no longer accept new patients and had to direct incoming ambulances to other facilities.

Health Director Barbara Ferrer attributed the surges to residents gathering over the Thanksgiving holiday, despite repeated pleas to stay home.

"This is a post-holiday surge that doesn't need to be," Ferrer told CNN. "This is a lot of intermingling that needn't have happened."

And the worst is yet to come, county health services director Dr. Christina Ghaly said earlier this week. "We are still in for a very rough few weeks at least, and potentially through January," Ghaly said.

By late Thursday, four of five California regions will officially be under a state-mandated stay-at-home order, because intensive care unit capacity in those regions fell below 15%.

Three regions fell under the order earlier this month, and it officially goes into effect in the fourth -- the entire San Fransciso Bay Area -- at 11:59 p.m. PT, after the ICU capacity fell below the threshold this week, state officials said.

Officials in much of the Bay Area preemptively ordered their residents to stay home earlier this month because the capacity was dropping. But this week's data puts the entire region under the state order, which now covers all of the state except a mostly rural region stretching from north of Sacramento to the Oregon state line.

Governors across the Northeast and Midwest, meanwhile, issued a video message this week encouraging residents to "double down" on safety measures and reconsider their holiday plans.

"If you are planning to travel or gather with other households for the holidays -- we urge you to reconsider," the governors said. "Just one infection can cause an outbreak in your community, which could overwhelm our hospitals and put you and your loved ones at risk."

In hopes of helping curb the spread around the holidays, El Paso County Judge Ricardo Samaniego announced curfews from 10 p.m. to 5 a.m. lasting from December 23 to December 26 and from December 30 to January 4.

"What people need to know is, we are still at a dangerous and critical part of this pandemic, and tens of thousands of American lives are at stake," Adm. Dr. Brett Giroir, assistant secretary for health at the Department of Health and Human Services, said Wednesday.

"If you can avoid traveling, that's a good measure," he added.

As the number of Covid-19 hospital patients rises daily around the country, stress is taking a serious toll on those who provide them with health care, emergency physicians said.

"We're already seeing a lot of PTSD-like symptoms in, especially, the bedside providers, both physicians and nurses, as the waves continue," Dr. John Hick, an emergency physician and professor of emergency medicine at the University of Minnesota, said on a call hosted by the CDC.

"Being surrounded by death every day in the critical care units in a way that we have not previously experienced, and having patients so isolated from family members and often with nursing staff being the only bridge between a dying patient and their family and the outside world, put tremendous stresses on all levels of care providers," he said.

Added to that is the sorrow of watching fellow health care workers becoming ill and sometimes dying of Covid-19.

"The incredible stress of the magnitude and pace of the patient surge intertwines with the moral burden of making life or death situations," he said.