US sails warship past contested islands in South China Sea, ahead of G20 summit 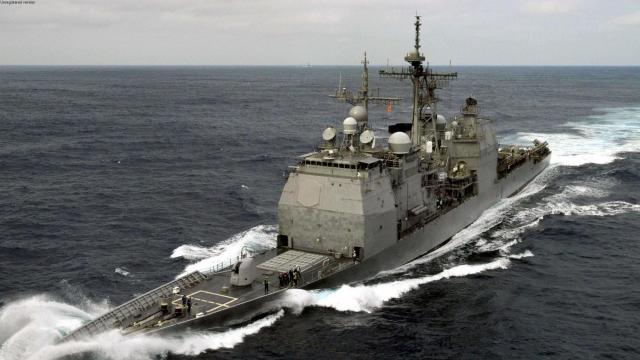 (CNN) — The US Navy sailed the guided-missile cruiser USS Chancellorsville near contested islands in the South China Sea Monday, less than a week before US and Chinese leaders are due to meet for a high-stakes summit at the G20 in Argentina, two US officials told CNN.

The "USS Chancellorsville sailed near the Paracel islands to challenge excessive maritime claims and preserve access to the waterways as governed by international law," US Navy Cdr. Nathan Christensen, a spokesman for US Pacific Fleet told CNN in a statement.

The US warship conducted what is referred to as a "Freedom of Navigation Operation" in the vicinity of the Paracel Islands to challenge claims made by China, Christensen added.

A US official said that the Chancellorsville was shadowed by a Chinese vessel during the operation but that all interactions were deemed safe and professional.

US officials say the operations are meant to enforce the right of free passage in international waters.

"US Forces operate in the Indo-Pacific region on a daily basis, including the South China Sea. All operations are designed in accordance with international law and demonstrate that the United States will fly, sail and operate wherever international law allows," Christensen said.

The exercise comes just days before US President Donald Trump is due to meet Chinese President Xi Jinping on the sidelines of the G20 in Argentina, in what are some are hoping could lead to a deal defusing US-China trade tensions.

Since the beginning of 2018, the Trump administration has moved to place tariffs on more than $200 billion of Chinese products in protest against what the US President views as unfair trade practices by Beijing.

In an apparent gesture of goodwill ahead of the G20 meeting, Beijing allowed a US Navy aircraft carrier group to dock in Hong Kong in late November, just two months after refusing a similar request by the US military. One of those ships was the USS Chancellorsville.

While the US Navy conducts such freedom of navigation operations all over the world, China is particularly sensitive about the operations when they come near areas where the Chinese government has built islands and established military facilities on disputed maritime features.

Stepping up in the South China Sea

Monday's operation in the South China Sea is just the latest in a series of freedom of navigation operations conducted by the US navy in recent months across the region.

In late September, the USS Decatur sailed within 12 nautical miles of Gaven and Johnson reefs in the Spratly Islands as part of a similar freedom of navigation operation.

During that operation, a Chinese destroyer came within 45 yards of the US warship, forcing it to maneuver to avoid a collision. The US labeled the Chinese warship's actions unsafe and unprofessional, while Beijing said the US was threatening the safety and sovereignty of China.

The US Navy has had 18 such unsafe or unprofessional encounters with Chinese military forces in the Pacific since 2016, according to US military statistics obtained by CNN.

The US has criticized Beijing over what it sees as China's militarization of the South China Sea. On Wednesday, the US Navy also sailed two ships through the Taiwan Strait.

The approximately 110-mile-wide strait separates the People's Republic of China and Taiwan and is seen as a potential geopolitical flashpoint should Beijing ever seek to take the island of Taiwan by force.

While the strait constitutes international waters, China is thought to be very sensitive about the presence of US military forces in the area.

Two US officials previously told CNN that Chinese naval vessels followed the US ships during the transit and that all interactions with the Chinese were deemed safe and professional.