US is 'rounding the corner into a calamity,' expert says, with Covid-19 deaths projected to double soon 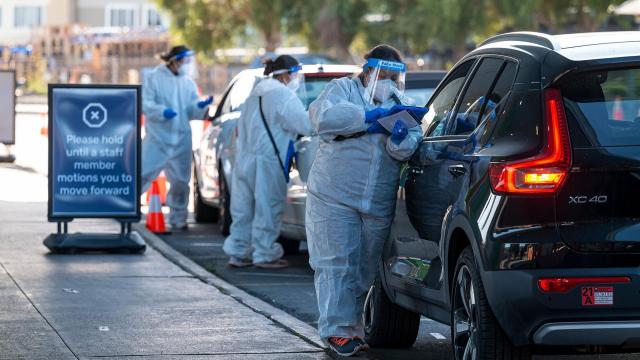 CNN — As Thanksgiving week draws to an end, more experts are warning the Covid-19 pandemic will likely get much worse in the coming weeks before a possible vaccine begins to offer some relief.

More than 205,000 new cases were reported Friday -- which likely consists of both Thursday and Friday reports in some cases, as at least 20 states did not report Covid-19 numbers on Thanksgiving. As of Saturday evening, more than 138,000 new cases and 1,100 deaths had been reported, according to Johns Hopkins University.

The US has now reported more than 100,000 infections every day for 26 consecutive days. The daily average in the week to Friday was more than 166,000 -- almost 2.5 times higher than the summer's peak counts in July.

The number of Covid-19 patients in US hospitals reached record levels on Saturday evening, with 91,635 Americans hospitalized with Covid19, according to the COVID Tracking Project.

And daily Covid-19 deaths in the US have been increasing. The daily average across seven days was 1,477 on Friday. But more than 2,100 deaths were reported on each of the two days before Thanksgiving, the first time that level was crossed on consecutive days since late April.

And while there is more good news on the vaccine front, for now Americans need to "hunker down" and prepare for a difficult winter ahead, according to Dr. Leana Wen, an emergency medicine physician and a visiting professor at George Washington University Milken Institute School of Public Health.

"We cannot let our guard down," she told CNN Friday night. "The vaccines will make a big difference in the spring and the summer; they're not going to make a difference right now."

Based on the current Covid-19 numbers in the US, the country is far from rounding the corner, she said.

That projection has been echoed by other experts including Dr. Jonathan Reiner, a professor of medicine at George Washington University, who predicted Wednesday the country's daily death toll would likely double in 10 days, and soon see "close to 4,000 deaths a day."

The US has so far recorded more than 4 million official coronavirus cases in November, representing roughly 30% of the country's pandemic total of 13.2 million official cases, according to Johns Hopkins University data.

Researchers have cautioned that total probably is a vast undercount, partly because of limited test availability, especially early in the pandemic.

A modeling study published this week by CDC researchers suggests only about one in eight coronavirus infections in the United States were recognized and reported through the end of September. That would mean as many as 53 million people in the United States could have been infected from February through September.

The Thanksgiving travel and gatherings that took place this past week will likely only further push cases upward, experts have said.

Reiner previously described the holiday as "potentially the mother of all superspreader events," with Americans leaving from every airport in the country and possibly carrying the virus with them, oftentimes unknowingly.

The US Centers for Disease Control and Prevention warned Americans to avoid travel for Thanksgiving, but millions have flown since that warning. Travel industry groups expect Sunday -- as everyone heads home from their holiday destinations -- to be the busiest day of travel since the pandemic began.

To prevent further spread of the virus, everyone who traveled and gathered indoors with people outside of their household should quarantine, Wen said.

"That's because those gatherings, in particular indoor gatherings with many people who are not wearing masks for prolonged periods of time, those are the highest risk for transmitting coronavirus," she said Friday. "Quarantine for at least seven days and then get tested."

"If you are unable to get a test because testing remains so limited, you should quarantine for 14 days. And I mean a full quarantine, don't go to work, don't go to school, keep safe."

More local and state leaders have been reacting to rising cases by announcing stricter restrictions. That includes Los Angeles County, which announced Friday a new stay-at-home order that prohibits all public and private gatherings with people outside a single household.

"Residents are advised to stay home as much as possible and always wear a face covering over their nose and mouth when they are outside their household and around others," the county's public health department said in a news release.

The order will take effect Monday and last through December 20, the release said. The prohibition does not apply to "faith based services and protests, which are constitutionally protected rights," the department said.

"We know we are asking a lot from so many who have been sacrificing for months on end and we hope that L.A. County residents continue following public health safety measures that we know can slow the spread," said Barbara Ferrer, the director of the county's public health department.

"Acting with collective urgency right now is essential if we want to put a stop to this surge. Please remain home as much as possible and do not gather with others not in your household for the next three weeks," Ferrer added.

In an online briefing Saturday, Ferrer said 1,951 people were hospitalized with Covid-19 in LA County, with 25% in the ICU.

"We're at about 75% capacity for hospital beds. Obviously, [we] have seen a pretty dramatic increase, over 100% I think in two weeks," she said. "The last time the county saw numbers this high at our hospitals was in August."

Ferrer warned that there had also been an increase in the number of healthcare workers infected with coronavirus, contributing to a stress on the workforce.

"You can have beds, but the beds all need to be staffed," she said.

That will enable "counties, and the businesses and nonprofits within their borders to operate with fewer restrictions when they slow the spread of the virus and drive down test positivity rates," Gov. Michelle Lujan Grisham said.

Counties where the virus is more prevalent, the governor's office said, will operate under more restrictions.

And while a vaccine has yet to receive the green light, the Federal Aviation Administration said Friday it has supported the "first mass air shipment" of a Covid-19 vaccine.

"As a result of the historic pace of vaccine development through Operation Warp Speed and careful logistics planning, the FAA today is supporting the first mass air shipment of a vaccine," the FAA said in a statement.

It says it is working with manufacturers, air carriers and airports to provide guidance on regulations to safely transport large quantities of dry ice in air cargo.

Last week, Pfizer and BioNTech announced they had submitted to the US Food and Drug Administration for emergency use authorization for their Covid-19 vaccine candidate. US officials have previously expressed concerns about handling Pfizer's vaccine, which must be stored at extremely cold temperatures.

Meanwhile, the CDC's Advisory Committee on Immunization Practices has called for an emergency meeting on Tuesday, where they will vote on which groups of people they recommend should get a Covid-19 vaccine first, once one is authorized.

"It is a significant advancement in the development and progression towards having a vaccine available," Rick Bright, a member of President-elect Joe Biden's coronavirus advisory board, said Friday.

The committee usually meets after a vaccine is authorized to make their recommendations.

"What we're seeing now is that the CDC is moving forward and being very proactive and having some of those early discussions before that vaccine's even finished being authorized at the FDA, so they'll be ready for that data when it comes to them," Bright said.

Fellow board member Dr. Celine Gounder told CNN that "people who are doing things that we really can't function without" should be some of the first to get vaccinated.

"Doctors, nurses who are caring for patients in the hospital, including patients with coronavirus, should very much be among those first receiving the vaccine," Gounder told CNN's Boris Sanchez on Saturday. "Beyond that, there are other frontline workers, essential workers, whether that's the people who are working in food and meat processing, people who are at the grocery store checkout counter."

People at higher risk of severe illness from coronavirus should also be considered for early vaccination, she said.

Gounder said that vaccinations may begin before 2021, which is in line with projections made by other health experts.